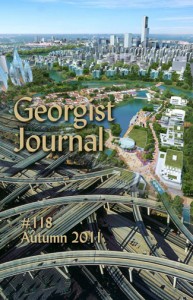 Since 1973, The Georgist Journal has been bringing news and views to Georgists around the world. Originally, the magazine functioned as an “in-house” newsletter, updating widely-dispersed colleagues about goings-on and facilitating dialogue. Bob Clancy, the 20th century’s preeminent Georgist educator, morphed the newsletter of the International Union for Land Value Taxation and Free Trade into the Georgist Journal soon after the HGI’s founding in 1971. He served as the magazine’s Editor until his death in 1995. Current Editor Lindy Davies took over that year with Issue #85.

In recent years the Journal has evolved into more of a general-interest magazine focusing on Georgist political economy — though it still covers news of conferences, movement events and LVT-implementation progress.

Since its founding, the Georgist Journal has been distributed to members of the Henry George Institute and the International Union. In 2002 the Council of Georgist Organizations also adopted the Journal as its official publication.

Our archives contain a great wealth of creative, inspiring, scholarly, whimsical material — and folks have been after us for years to get it up on the Web! It’s a big job — but this site will keep growing until we’ve presented every bit that’s available (except, of course, for the current issue — which members and subscribers will still receive first, in print).

Please stop by often, and peruse our ever-expending compendium!

One thought on “Welcome!”