This is an exciting, important and timely work; it will sell well. Anderson has ferreted out and marshaled dozens of sources on the 18-year cycle of boom and bust in real estate, its history, its mechanics, and its dynamics. Some of the neglected sources are old; some are current — but after Anderson it will be hard for macro-economists to continue neglecting them. He melds the dramatic skills of a raconteur with the industry of a scholar and the discipline of a field marshal, to keep readers wide awake while they follow — and most likely accept — Anderson’s take on economic history. 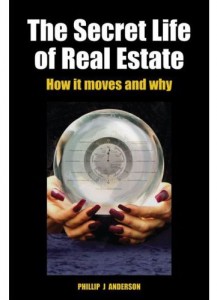 One test of an hypothesis is prediction. Anderson accepts that challenge, even providing us with a “clock” to let us know where we are in the cycle. His theme is “Understanding the Past to Predict the Future.” After guiding us through many 18-year cycles, from 1800 to date, he sums up with a chapter disarmingly titled “Knowledge We Gained along the Way.” Here are some major findings:

1. The prices of land peak before other measures do — it is a leading indicator. Construction peaks after land prices do, but before recession hits, where “recession” is measured in GDP and other familiar metrics used by the NBER.

2. Few people study history, so few under about 42 even know there is a land cycle. All they know is their own recent experience. In the heat of a land boom, lasting several years, they easily fall prey to projecting the boom indefinitely forwards. Few leading “mainstream” experts forecast crashes, even as they are beginning to happen; quite a few deny them even as they turn catastrophic. Anderson names names, including Ben Bernanke’s, and most of us could add more.

3. Bank credit swells and shrinks in synch with the land cycle. The two interact in a positive feedback process: swelling bank credit raises land prices; buyers need more credit to purchase the land; the appreciated land then serves as collateral for more bank loans, and so on.

4. Banks are highly vulnerable to downturns because they borrow short to lend long. In the heat of a land boom they carry inadequate capital reserves to cover the 18-year crash, even though that is, to Anderson, predictable. Insuring deposits, and bailing out failed banks, creates moral hazard that leads to repeated excesses.

The “secret life” of real estate is not really so secret. Anderson has found it from secondary sources, which he simply marshals. What’s secret is why this open secret is closed to our most prominent macro-economists. One reason is they choose to ignore economic history, as shown by their rooting it out of their required curricula, replacing it with courses in abstruse theory and econometric techniques that mark modern “mainstream” writers and journals.

Another reason is that they disdain the study of land values and other privileges, lowball their values, and avoid integrating them into their models and hypotheses. This is partly from an overreaction to the historical Henry George, who put land values at the core of his analyses, and bitterly condemned academicians for not following his lead. Being both an intellect and a political force he stirred up throngs of disciples, some of them unlearned and crass, to make of this feud a tradition. That seems too petty, however, to explain such systematic dismissal of the obvious role of land. The greater and enduring reason is probably the defensiveness of rentiers against any challenge to their rents and unearned increments. This has led them to found and fund leading universities, and more recently think-tanks, and to pack the boards of public universities with regents supportive of their views. Critics call this “deep lobbying,” and it now dominates both media and academia.

Unfortunately, The Secret Life falls short of being the classic it might be because of Anderson’s haste. This is understandable, considering the timeliness of his thesis, but he leaves many loose ends to trouble a critical reader. Worse, they provide fuel for captious critics.

Anderson is an investment counselor and popular speaker. This leaves two things unclear. For one, it is not evident whether he is addressing public policy or advising speculators when to buy or sell. His major social value judgment, which appears often, is so drastic, and so vaguely specified, it does not amount to a specific workable idea. He blames private land tenure for the boom/bust cycle. Those seeking a guide to public policy will wish he had attended more to that. He does draw heavily on Georgist sources, especially Fred Harrison, George Miller, and Fred Foldvary, so one could infer that he favors the Georgist policy of taxing land heavily, with the corollary of reassessing it often, to abort incipient booms of irrational exuberance. But it’s likely that his investment clients will filter that out, while appreciating his prescient forecasting.

Secondly, it is often unclear to what year his present tenses refer. The originals, he writes, came from client newsletters he sent out 1998-2004. Some of them read that way. However the book is copyrighted 2008, with some additions up to about 2007, again using present tenses. Worse yet, he “signed off” on the book Sept. 7, 2008. This is curious since the book says nothing about the great crash of 2008, except to claim it as a forecast made earlier. This is probably the result of haste, but seems a little unfair.

Anderson has read widely, without an ideological filter. His coverage is extensive, but the scholarship leaves something to be desired. Some older sources he omitted are Carter Goodrich, Homer Vanderblue, Lewis Maverick, Ernest Fisher, Harry Scherman, Philip Cornick, Alexander Field, and others. On the other hand, to his credit, he has exhumed the neglected research of Roy Wenzlick. Scholars have undervalued Wenzlick because he was, like Anderson, something of a showman and promoter of his consulting business. Like Anderson, he took his material on lecture tours with dramatic display tools, and catered to the self-interest of clients. Yet he, too, discovered the 18-year cycle, and left a trove of research materials, which Anderson has studied, at the University of Missouri, St. Louis.

The more serious omission is the current work of Robert Shiller, Karl Case, Nouriel Roubini, Bryan Kavanagh, Michael Hudson, Piet Eichholtz, Anne Goldgar, Eitrheim and Erlandsen, and others, not to mention the foolhardy optimism of Bernanke, Lereah, Mandel, Greenspan, and other false prophets. It seems that Anderson’s extensive reading stopped around 2006. He cites Foldvary’s 1997 work, but omits his timely 2007 forecast, The Depression of 2008.

He does a good job of hitting the high spots of major land cycles after 1800, along with many vignettes to keep the work readable and entertaining. He marshals all his material to illustrate and confirm his basic thesis about the key role of land pricing in the 18-year cycle. His randomness optimally tempers his single-mindedness.

However, it would be an error to think that economic history began in 1800 or 1798. There were capitalism, land tenure, banking, and boom/bust cycles — all the elements that Anderson analyzes so well from 1800 to date, that one can trace back for centuries: the Mississippi Bubble of 1720; the Tulip Bubble of the 1630’s, which Eichholtz and Shiller showed to have been a land bubble; the end of the Great Migration to New England after 1630; the Florentine and Medici banking collapse of 1494; and so on. M.E. Levasseur has traced such cycles back to the year 1200.

Whatever its minor faults, Anderson’s Secret History is a book to study, remember, and steer by. Whoever wins the Presidential election of 2024, Be Prepared! This future President would also be well advised to select economists who, like Hudson, Harrison, Foldvary, Kavanagh, Shiller, Roubini, and Anderson, foresaw the Great Crash of 2008, rather than insiders like Romer and Bernanke who foresaw only a “Great Moderation” because we had, they said, “conquered the business cycle.”