The most vivid impression I took away from Managua is that it is a place where things don’t work. There doesn’t seem to be any malice in it; people seem quite cheerfully to be going about their many-hindered tasks. And while there is plenty of blame to go around, there doesn’t seem to be any obvious villain; even the new “socialist lite” Sandinista government seems to be trying its best and is, after all, a heck of a lot better than what they could have, but — things in Managua just don’t seem to work. This may be why Nicaragua is such a popular destination for people who want to help. I shared planes both going and coming with missionaries of various sorts — mostly evangelical Christians, but also a smattering of bereted communists, earth-shod fair-traders and, even, the odd Single Taxer. Paul Martin, our enterprising and dynamic “man in Managua,” whose operation I was there to see in action, concurred. “Yes, many people come here trying to fix Nicaragua — our Georgist school fits right in with that.”

Throughout the city one sees evidence of the disastrous Managua earthquake — which happened, after all, 39 years ago. Some damaged, condemned buildings still house squatters. Others are just standing as ghosts — most notably the lovely old cathedral, which looms brokenly over the Plaza de la Republica, the opulent Presidential Palace, and the lake. This was the first place I was brought to by Armando García, a volunteer from the Instituto Henry George and my frank and patient sightseeing guide. Here, many of Nicaragua’s dysfunctions were on view within convenient walking distance. The lake didn’t smell so good; sewage had been dumped straight into it for many decades, and although Managuans love their seafood, nobody eats fish from it now. While some efforts are being made to treat it, public funding is short and needed everywhere, so it’s doubtful that Lake Managua will be cleaned up before Mother Nature gets to it. Along the lake is a series of open-air nightclub-looking places and other amusements, utterly deserted on a weekday afternoon — but perhaps livelier at night. A new modern bandshell, styled like a demented coral formation, opens out on a gigantic open plain, where public rallies are staged, conveniently close to the president’s home. Also conveniently nearby is a ready supply of rally-goers in a new government housing development. These houses are, by first-world standards at any rate, extremely small structures, built on very skimpy, dry and treeless bits of land. The development is large; at least as extensive as the sprawling pampas of the open plaza — an efficient, modern shantytown. Armando assured me that first-time homebuyers were delighted to have these sheds; they let them build equity instead of throwing away rent. 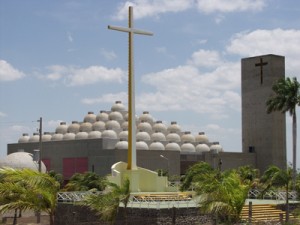 A view of the bizarrely modern “New Cathedral,” showing the highly relaxed urban density that characterizes metro Managua. Designed by archtect Ricardo Legorreta, it was completed in 1994.

The cramped-ness of the new development struck me so vividly because Managua is an incredibly open, sprawling — I was about to say sylvan — place. There are certainly lots of trees, but also great squalid piles of this & that. Vehicular traffic is fairly heavy, but there don’t seem to be many parking lots, apparently because there’s always a yard, curb or muddy spot by a ditch to slide a car into. For public transportation there are the heroically overstuffed public buses. Driving is challenging for many reasons: signage is inconsistent, manhole covers nonexistent, and traffic lights darkened by frequent power outages.

Paul lives near the bustling commercial neighborhood known as the Mercado Oriental. In my innocence I found it chaotically beguiling, like parts of Brooklyn, and it was the first place I asked Armando to take me to. We had cerveza and a nice picante fish soup while I tried to get a handle on things. An entire family rode by on a bicycle: a father and mother, two fairly good-sized kids; I’d say about 5 and 7, and luggage hanging in plastic bags; this while cars and trucks did the manhole-slalom in both directions, they pedaled serenely along the street.

Leaving the mercado by taxi, Armando pointed out a dingier, less colorful section that he called the Mercado Negro. I’d been accustomed to “black market” being not a place but a phenomenon (not something one would advertise with a street address). But it works a bit differently in Managua. All manner of commercial activities go on in the Mercado Negro district — stores, car repair shops, pawnbrokers, dealers in hard and soft drugs, guns, prostitution, etc. What ties these enterprises together, Armando explained, is that they aren’t taxed. Why not? Because enforcement isn’t feasible. So, is the Mercado Negro growing? “Oh, yes,” he nodded, “Quickly.”

Unfortunately Mr. Martin wasn’t feeling well during my vist; he had the flu, so I had a luxury of time to simply observe. I accompanied his friend Johanna and elfin 5-year old daughter Jasmín on an errand to the Centro de Salud, whose squalid ramshackleness wasn’t a surprise, but was a revelation nevertheless. Johanna, a registered nurse, seemed a little embarrassed; it had suffered many cuts in an already inadequate budget.

Meanwhile, a team of three volunteers from the Instituto Henry George gathered at Paul’s dining room table to grade the week’s piles of student exams. Here is a salient feature of the Instituto’s educational program that would shock Henry George School veterans: each student takes a comprehensive written exam on each week’s reading. Scores are recorded; students are ranked; points are even docked for late arrivals at class. Paul says that this sort of discipline is integral to his program’s success. Class sessions involve a volunteer reading from the text — which is a new modern-language version of Progress and Poverty adapted by Paul himself, with examples drawn from modern, Central American life — followed by interpretive analysis by Profesor Martin. Factual questions are entertained, but student discussion is minimized. “We focus on the text,” Paul explains. “They study the text, and they learn the ideas. It’s not the sort of thing they are used to.”

It seems to work, though. The Instituto militantly eschews the stereotypical Latino lackadaisicalness, and its classrooms are full — when things are working. A class last year had to be abandoned because of severe, recurring power outages (and Paul was on the verge of cancelling a class during my visit for that reason, when the electricity popped back on at the last minute). Thirty-six students completed the class I visited, and most signed the petition. This is a document urging the city and the nation to implement a rent-as-revenue system as soon as possible, and it bears nearly 3,000 signatures. Don José Cruz, the elder statesman of the IHG volunteers, explained that in Managua one needs 5,000 signatures for a petition to be taken seriously, and they will have them before too much longer. 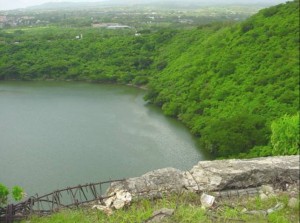 My next tourist outing took me to the Laguna Tiscapa, the volcanic crater lake in the very middle of Managua, not far from where the IHG’s new headquarters is being completed on a site that had been an informal garbage dump. The Laguna is a beautiful spot, and is quite undeveloped. It is owned by the national government, part of the territory of a nearby army base. (Its water, alas, isn’t so good for swimming; a former Managua Mayor once dove in to show how safe it was, and had to be hospitalized for the rash that resulted.) Paul has an ambitious vision for the spot: he proposes that the government provide basic infrastructure and then lease the site to a consortium of developers — to demonstrate what can be achieved when the community takes the rent that it has created. 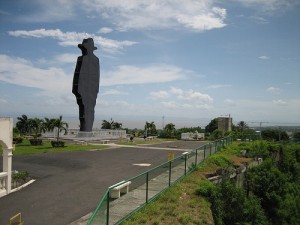 On my final evening there, Paul’s flu had gotten worse and he wasn’t up to teaching class. He called upon his top teacher-in-training, Jimmy Trejos, and me, to pinch hit. (My Spanish wasn’t good enough to allow me to take the class without help, but it was a delight to fill the role of “visiting dignitary” and field questions.) Jimmy really needed no help; he held forth confidently with an impressive grasp of Georgist theory. There was a sense, in this final session of this class, that some pent-up student energy had been let loose of the normal rigid discipline; the class got, maybe, even a little rowdy — but the questions, even the skeptical ones, were thoughtful.

Out of each of Paul’s classes of between 30 and 50 students, the half-dozen or so best are invited to take on stipended volunteer positions, or to intensive sessions to prepare for teacher training. These distinctions work as incentives — students diligently complete their assignments, arrive on time and listen respectfully. Paul Martin eagerly anticipates the next phase of the Instituto’s work, in which their political and media outreach will really serve to build a constituency for Georgist reform in Nicaragua. Establishing a headquarters in its own building, where classes as well as conferences and other functions can be held, is a major component of that overall effort. And, not one to think small, he envisions “franchising” the Instituto’s model to other societies that, like Nicaragua, don’t work — and where, therefore, the need for fundamental economic reform is starkly visible.