This essay is part of the readings for the online in Land Rights and Land Value Capture, produced by the Earth Rights Institute, with support and cooperation from the United Nations Habitat Global Land Tools Project.

Land value capture is strategically important for the political, economic and social empowerment of women. There are enormous historical and present day gender disparities in land tenure worldwide. The largest and most valuable individual and corporate landholdings are predominantly owned and controlled by men. Public funds generated by land value capture would come primarily from these lands. 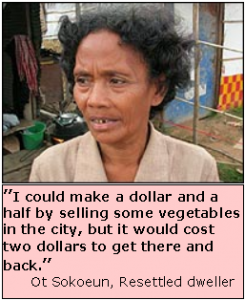 Women are more likely to be wage earners and small landholders. The land value capture approach includes elimination of taxes on wages and production. Those with smaller holdings use their lands intensively and efficiently and they would be encouraged to produce as much as possible without a tax burden on the products of their labor. Freed from taxation on their productive activities, the purchasing capacity of women would increase. When land speculation and hoarding is curbed, land is released for sale. Land and thus housing becomes more affordable as supply meets effective demand. These conditions increase gender equality with respect to land. Adequate, secure, affordable shelter brings economic and social stability to women and their families.

Land value capture is a form of land-based taxation that cannot be passed on to apartment renters. One reason landlords can charge rents at the level they do now is that so much land is held out of the market (neither used nor put up for sale or lease) or is represented in the market far below its potential (underdeveloped). Land value capture creates greater competition among landlords. Owners of vacant or underutilized property would be encouraged to construct housing units or sell their land sites to someone with the capacity and willingness to do so. The addition of these properties to the market decreases the competition for housing and so keeps housing rents down.

For women wanting to buy homes, land would inevitably be cheaper as those holding land for speculation sell. Sprawl and the premature development of rural lands would be diminished and so land prices in these areas would not inflate as is often the case under current economic structures. Lands that could be utilized by women growing produce or joining together in various economically productive ventures would thus be located closer to urban markets.

The work of women that is not commodified or measured in cash payments makes a considerable contribution to families, extended families, and society in general. Intact, communal land tenure systems, still existent in some regions of the world, often better support contributions of women who, sharing a common and contiguous land base, can better organize for cooperative endeavors. Extreme land privatization, with individual small lots suitable only for nuclear families, weakens and breaks the bonds of extended family and community.

Because of their role in child rearing and their important roles in community relationships, women are often more tied to place than men. Secure land tenure, affordable land access, and a fair, transparent, orderly system of finance — all promoted by land value capture policy — strengthen women’s power and voices in deciding political and economic policies.

Land privatization is not necessary to implement land value capture, which accommodates a variety of forms of land tenure. Tribal, clan, and extended family land bases can remain intact with a land value capture system by constituting such lands as types of land trusts or community leaseholds.

When economic opportunities are strong elsewhere, as in rapidly developing urban areas, women should always be free to choose to migrate to such areas. But where wages and opportunities for secure livelihood diminish in the urban or wage economy, women and their families should always have access to rural land for subsistence agriculture and shelter.

If, however, rural land has been enclosed as exclusive private property, the safety valve of secure tenure — the “right of return” — to land is no longer an option. Women and their families then become vulnerable to the entrapment of wage slavery, prostitution and beggary. Poorer women can take a stronger stance against labor exploitation when they have the safety valve of land access in rural areas.

The equitable land rights promoted by land value capture furthers a transparent land tenure system that is not mediated by male roles. The exception would be where traditional male dominant tenure systems might endure even with a land value capture policy in place. In such circumstances it is important to have women included equally with men in deciding how land value capture funds are allocated. Women would then be empowered to choose to direct these funds in ways that would make improvements that would be most helpful to women. For instance, women might choose to fund child care centers and schools rather than sports stadiums. If they did choose to fund sports stadiums they might insist that women’s teams have equal access to the field.

Women might also decide to allot a portion of the land value capture funds for distribution as direct payments, or “citizen dividends” to women (or men) when they are working in non-waged yet socially important roles, such as being the primary caregiver to young children or elderly parents.

Women might also decide that a portion of the public fund should be made available for low interest revolving loans to build or improve homes.

Land value capture directly addresses the underlying dynamics of power that currently ensnares the poor, women, ethnic minorities and other vulnerable groups. It is a significant tool to promote both urban and rural land reform.

Women should become knowledgeable about land value capture in order to secure full economic and human rights to land via:

1. Free access to the specifics of legal documents enabling the implementation of the land value capture system of public finance.

3. Functional and effective land dispute arbitration in order to determine fair rights of use to specific land parcels as well as equitable land value assessments.

4. Transparency, accuracy, and efficiency of public authorities entrusted with the implementation of land value capture.

5. Participatory decision making in the distribution and allocation of public funds.