Luke North was the pseudonym of James H. Griffes, the prolific Single Tax activist, editor and poet of the first three decades of the 20th century. Spoon River Anthology (1915) by Edgar Lee Masters, is the celebrated collection of short poems in the form of epitaphs of the members of a small midwestern town, delivered by the dead themselves.

I was the leading singletaxer in Spoon River
I organized its first singletax club
I once saw Henry George himself
And I knew Louis F. Post
And Daniel Kiefer.

I wrote articles for the press
About taxation problems,
Was a fluent talker
And could prove the falsities of Karl Marx to anybody
But a socialist.
I was called the John Z. White
Of Spoon River.
We had a flourishing club,
With after dinner lectures and discussions
One a month — regular.
And weekly luncheons at which we discussed the shipping bill or the currency question
And entertained any noted person
Who came to Spoon River.

Singletax became favorably known
To the Better Elements of Society.
The congregational minister
Preached a sermon on it.
We had a debate at the high school,
“Resolved that singletax is scientific.”

We had an exclusive membership
Of cultured persons
Tirelessly devoted to the cause of
Rational taxation.

If I had lived another year
I would have gone to the legislature
Where I could have scrutinized
Every measure
In its relation to the Philosophy
Of singletax.

But there arose in our midst
A band of irresponsible agitators
Who stirred up the people
To open the land!
They were emotionalists
And would not discuss calmly a compromise with those
who do not care for the immediate Practice of their preaching.

They ranted about the army of disemployed,
About women driven to prostitution,
Men toiling for a pittance,
Children as wage slaves,
Babes starving.
They joined with socialists,
Anarchists, syndicalists, IWWs —
People like that!

With anybody who would struggle
To change the land tenure
To use and occupancy
Right away!

I opposed them eloquently
And with stratagem
For their radical demands
Would alienate from our Cause
The growing tolerance of the corporations and business men, 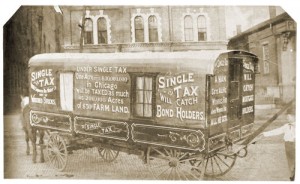 The interest of the politicians
And the curiosity of club women.
Bankers, leading citizens, the daily press
Would view us with distrust.

Could anything be worse
For the success of a Forward Movement?
I tried to rally the old war horses
To stand by their colors
And preserve the sacred
And respectable
Singletax philosophy
In unsullied purity
From these anarchists
And disturbers.

But the agitators
Had the voting strength,
So Mrs. Jonesburg and I resigned
And started a Singletax Philomathic Society
For the discussion of proper methods
To alleviate poverty
Three-quarters of an inch a year
Without causing any annoyance
To Existing Conditions.

If I had lived
We might have rehabilitated
Singletax in respectable circles.
But the idea
Of unscientific people
Led by agitators
Demanding the whole earth
Immediately!
Was too great a shock.

They said I died
Of heart failure.
But I don’t understand that
For the autopsy surgeons
Couldn’t find such an organ
And said it had probably
Been absorbed
In my brain development.

(Thanks to www.wealthandwant.com — where the reader can find much more of Luke North’s writing!)