No doubt, some GJ readers will roll their eyes: “Oh, Mumia again…” To them, I can only say that Jailhouse Lawyers (like Abu-Jamal’s other books, particularly the recent We Want Freedom) is well worth reading regardless of the author’s notoriety. Ironically, though, it is because of its author’s name that I, along with many other readers, heard of it — and that is what makes Mumia Abu-Jamal one of the most important writers in America today. It’s ironic, too, that prior to his arrest, when his journalistic star was rising in the late 1970s in Philadelphia, he was known as “the voice of the voiceless” — because that is most definitely what he has become during his 28 years on Death Row. 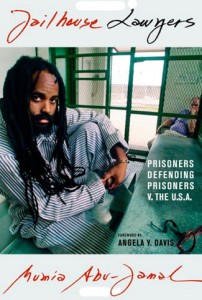 The United States has the highest rate of incarceration in the world; roughly one in a hundred Americans are behind bars, and for certain groups, such as African-American men, the number is very much higher. Among the many things this means is the simple fact that the experience of life in prison touches many, many people in this country — and yet there is almost complete silence about what prison life is like, and what it means. Suppose there were another group in the USA in which 2.3 million people were directly involved, and their families and friends were intimately associated — something like, say, the United Auto Workers. The UAW gets considerable press; people think a fair amount about how things are going for them — and they only have about half a million members!

Like it or not, prison in the United States is a subculture and, recidivism rates being what they are, for many people it is a way of life. Yes, there is a great deal of dead-end behavior. But there is also an amazing undercurrent of self-improvement. A great many people in prison are starving for educational opportunities; the “viral” way in which the HGI’s correspondence course program spreads there is a case in point. But probably the most doggedly persistent, accomplished class of “inside” striver is the subject of Mumia Abu-Jamal’s study: the “jailhouse lawyer.”

The term is used with reservations. Many highly knowledgeable, skilled practitioners refuse to refer to themselves as “jailhouse lawyers” because of the stigma it carries. Abu-Jamal says nothing at all in this book about his own case, although his research for this book arose out of his own self-administered legal training. In this, he may be typical; he reports that

Jailhouse lawyers are, by and large, a rather funny bunch. Many seem to be self-effacing and quite low-key about their accomplishments. Indeed, many of those interviewed for this work took umbrage at the very term “jailhouse lawyer.”

Perhaps this stems from a natural desire to distance oneself by flying below the treacherous radar of prison, which remains a deadly place where furious envies may arise.

Perhaps it stems from a sense of real anger directed at real-world lawyers, and this self-effacement serves as a subtle defense against the projections that almost inevitably occur.

There is another reason, however: far too many have posed as jailhouse lawyers — often knowledgeably — only to gain privileged information with which they could turn “snitch,” exchanging it for better treatment or even reduced sentences.

As a jailhouse lawyer, Abu-Jamal had a ringside seat for the enactment and enforcement of the Clinton-era Prison Litigation Reform Act, a law which, ostensibly, would limit frivolous litigation by inmates over small, or even trumped-up, slights in their treatment — but in fact would severely restrict the legal recourse available to inmates for any complaint. There can be no doubt that the hue and cry for this legislation arose out of the popular fantasy that the vast majority of prisoners have received uncorrupted, due process — that miscarriages of justice are anomalous enough to be fodder for those prime-time cop shows in which teams of investigators work tirelessly to uncover the buried evidence of a mistaken conviction. But in the run-up to this law’s passage,

Every major American broadcast network (and their cable/satellite cousins) aired features about the jailbird who sued because he got creamy instead of chunky peanut butter in his commissary bag. Or the dude who filed a First Amendment challenge to the prison for not delivering his Playboy magazine on time. Such reports were as common as popcorn in a movie theater. The problem with these reports is that they weren’t true.

The Prison Litigation Reform Act was a plank of the Right’s “law and order” agenda. But, passed as a little-noticed rider on a massive appropriations bill, it also served as a negotiating point in the Clinton administration’s back-and-forth dickering with the right wing. It even went as far as to prohibit the awarding of damages for emotional or psychological injuries — a provision which, in 2006, the Supreme Court declared unconstitutional, but only as far as it applied to First Amendment challenges.

The counterparts of “jailhouse lawyers” are those who have passed the Bar Exam and serve as attorneys: “street lawyers.” Members of that club receive training, Abu-Jamal suggests, in the intricate workings of a dynamic that self-taught legal practitioners must learn through hard experience: the fact that what the law says is an altogether different matter from what the law does. Stories abound of a slapped-together brief, almost gibberish, winning a case because it landed on the right side of a favor somebody owed — while meticulously researched legal positions, fully supported by precedent, have been tossed out unread.

One common thread in the experiences of jailhouse lawyers is that their efforts often come in for the severest punishment. It is widely understood that inmates spend far more time “in the hole” for reading the law, and talking about it with other inmates, than for all manner of other infractions, including violent ones. Why would self-empowerment in the study of the Laws of the United States be treated as such a scary, subversive thing to do? That’s a question that people who enjoy watching Law and Order might need to ask — but for people in prison it is all too rhetorical. Mumia Abu-Jamal concludes,

Unless there is a drastic social transformation… in either bar membership or real confidentiality rules, the number of jailhouse lawyers (albeit of dubious quality) can only increase. For jailhouse lawyers are seeded by the weeds of systemic social injustice….

Men and women, often self-taught, have developed a tradition of selfless service and in some cases excellence, to serve the needs of socoety’s dispossessed.

To be one of that number has been a challenge and an honor to this writer, who offers this reportage to illustrate what transpires in the depths of America, the Prisonhouse of Nations.