British politics has long divided along class lines. During the period from 1850 to 1915 the control of the House of Commons oscillated between the Conservatives, who spoke for the privileged and traditional-minded classes, and the Liberals, who considered themselves the “party of the people” and the protectors of the weak and downtrodden.

In the 1905 election, the Liberals took over power from the Conservatives yet another time. The new Liberal Prime Minister was Henry Campbell-Bannerman. In his administration were two rising young Liberals, David Lloyd George, and Winston Churchill. 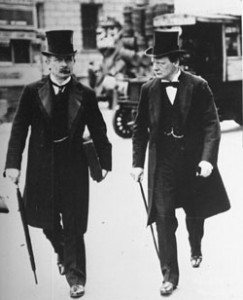 The 1905 majority in the House of Commons was 513 to 157, signaling a special mandate. The Liberals had a radical agenda based on the doctrines of Henry George, who had become a larger-than-life figure in the political life of Britain. On a a speaking tour of Ireland and Britain, George had convinced Lloyd George, Churchill, and many of the leading intellectuals of the day that the only way out of Britain’s social and economic ills lay in the adoption of Henry George’s program of taxing rent. The Liberals had added the plank to their platform already in 1881 and they were ready to act on their convictions.

Lloyd George and Churchill took the lead by framing a new budget, in which a large proportion of the revenue was to come from a tax on the rental value of land. This “People’s Budget” was debated repeatedly, and finally passed through the House of Commons in 1909. The pressure for passage was mainly sustained by the efforts of Lloyd George and Churchill. Forcing the bill through the House of Commons wasn’t easy, but what about the House of Lords? Here the land-owning Conservatives held most of the votes, and since the concurrence of both Houses were necessary, radical measures were needed.

The Liberals, arguing practical necessity and the size of their electoral mandate, persuaded the King that, if necessary, he would create a sufficient number of new Liberal peers to outnumber of Conservatives in the House of Lords. In light of this threat, never really executed, the House of Lords reluctantly agreed to surrender their veto power over money bills.

This Liberal victory came too late, however, for the adoption of The People’s Budget — at least in its full-strength version. Many compromises had entered into the formulation of the budget during the years of debate and even the watered-down, overly-complicated version that remained was scarcely put into application. The onset of the First World War further threw the scheme into disarray, and in 1920, The Coalition government, under

Chamberlain, abolished it altogether. To this day, the debate has never resurfaced. The People’s Budget debates of 1905 to 1909 represent the high-water mark of Henry George’s glorious idea.

Geoffrey Lee’s account of this episode in British history was originally published in 1996 by the Henry George Foundation in London. The author includes a chapter on George’s life and a sympathetic discussion of his ideas. I found Lee’s book an easy read. The tone is logical, sure-footed as to its facts, and unstuffy — characteristic of the practiced journalist. And then too, it was a story with a natural beginning and a natural end — a nice, self-contained little lesson. I got the feeling, however, as I was reading it, that I was part of the choir, and that here was another book preaching to me.

Maybe, as an American, I have become a little too suspicious of expressions of enthusiasm, especially for political ideas. Nothing can cause one to get a fishy look from ordinary Americans like dragging some ‘ism’ into the conversation. There is a fear of ideas — that they somehow violate ‘good taste.’ Well, I suppose they do. It’s painful to think. It’s difficult to take moral responsibility — and the McCarthy Era still reverberates. It’s always safer to be politically correct and that often means keeping silent.

I think Lee deserves admiration for his simple and straightforward storytelling and for having the courage to treat the subject with the kind of dignity it deserves. The usual contention of historians is that the aims of Lloyd George and Churchill, brought to a temporary focus by the teachings of Henry George, was a futile attempt to reach an unreachable goal — a naive attempt at “pie in the sky.” That is a pernicious lie that we hope future history will uncover.

Lee’s selection of this episode is very perceptive. It is indeed a sobering tale, a tragedy, that a good idea can be passed over, and be smothered in obscurity, while the politicians who were on fire for it, cool off and abandon it for reasons of expediency. Generally, we are not too disappointed when one or another of the political fads which animate our national debates passes into neglect. These usually come into existence to pander to some interest group or another and don’t represent a huge loss to the national welfare when they pass from the scene. But why is it that so few people can see that land-value taxation is not of that kind — that here was lost the sole best hope for justice and economic well-being? In the hard sciences and mathematics, there seems to be an inevitability that good ideas will keep resurfacing until they gain acceptance. Would that it were the case in political economy.