In its April/May 2008 publication “Current Issues in Economics and Finance: Second District Highlights,” the Federal Reserve Bank of New York presents a study by Andrew Haughwout, James Orr, and David Bedoll on “The Price of Land in the New York Metropolitan Area.”

The market value of land, apart from all capital goods (improvements) attached to it, can be measured when vacant land is sold or when a property is sold and the building is demolished. The article begins with an example of demolition: in 2000, a 3.4 acre of land 1.3 miles from the Empire State Building sold for $345 million, $2300 per square foot. The price of land can also be valued by estimating the value of the building and subtracting that from the total property value. 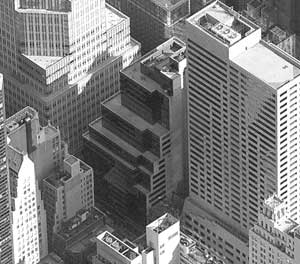 This building, shown here in the shadow of the Met Life building and other Midtown biggies, is the Roosevelt Hotel, which is up for sale at an asking price of $1 billion. Will they get it? Manhattan’s real estate bubble has kept expanding, largely due to an influx of foreign buyers, taking advantage of the weak dollar. Office rentals are stratospheric. The city assesses the land + building value at $112.5 million. So, you guessed it! It’s a 1,013-room, luxury tear-down.

When real estate prices are rising rapidly, it is really the land value that rises. The price of residential real estate in the New York metropolitan area rose by 160 percent from 1997 to 2007. This price appreciation data excludes the value of better house quality; thus it shows a large increase in the price of land.

The researchers in this article used a data set of real estate prices to measure the land values. They separated out over 6000 sales of vacant lots and purchases involving the removal of the existing structures. The authors found that “the price of an acre of raw land near the Empire State Building rose sharply between 1999 and 2006 and was more than $90 million in mid-2006.”

The study sought to correlate the value of land with the distance gradient from the Empire State Building, which they assumed to be the city center. As one would expect, land values drop as the lots become more distant from the center, though with a wide variance.

The authors note that the market value of land depends on the benefits of the neighborhood as well as anticipated changes. Their statistical “regression” analysis controls for the characteristics of the property, such as the past development of the lot, thus capturing the pure increases in land value. In their model, the price of land is the natural logarithm of the price paid per square foot for real estate of a particular type (commercial, industrial, residential) in a particular time period. The adjusted “R squared” is .76; this means that the model explains about 3/4 of the reason for the prices.

Land that was subject to foreclosure sold at a discount. The county the lot is in also contributes to the pricing differences, since the counties have differing regulations and taxes. The strongly declining distance gradient from the city center is consistent with standard location theory. The high price of Midtown Manhattan reflects its role as the center of commerce, not just for the region, but as a leading global center of commerce.

The study also documents the sharp rise of land values, more than doubling from 1999 to 2006, due to low interest rates and the real estate boom. Commercial real estate lagged behind residential real estate, as is usual in a speculative real estate boom. The authors says that the rise in land values reflected the “strength of the area’s economy” and also “a rise in the perceived value of owning vacant parcels as potential building sites to meet future property demands.”

The latter is a restrained, scholarly way of saying that land speculators were betting on ever-increasing site values. The authors do not attempt to analyze the consequences of this rapid raise of land values, especially in Manhattan, but it is evident that the rise has been much greater than the economic value of the neighborhood benefits. At the peak of a land boom, speculators buy because they expect other speculators to buy higher. Eventually, properties become priced too high for actual use, and prices stop rising. Then the speculators seek to sell, and the real estate boom crashes. This has happened first with residential real estate and we are also witnessing commercial real estate crumbling as it too gets squeezed by the credit crunch and excessively high land prices.