What a nice thing to see! An impressively laid-out trade paperback with an imposing image of the White House on its cover: a novel about a US President who gets the “location value” bug and turns his citizens on to it! Due to the good offices of David Triggs, Director of the Henry George Foundation of Great Britain, colleagues at the recent Kansas City conference got free copies — and Mr. Triggs plans another trip to the States to promote the book. 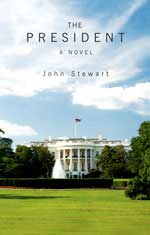 Any Georgist’s review of a Georgist presentation must have limited value, to begin with. After all, we have spent so long making points that seem overwhelmingly obviously true, and have been so stridently ignored by so many people that, well, objectivity is really no longer a possibility for us. Recognizing that, though, I’ll offer a few cautious points about The President.

It’s not Tolstoy, but it’s not bad. Its characters aren’t fully fleshed-out psychological creatures, but they’re recognizable and likable enough. The novel seems rather deliberately simple, as if aimed at a general, almost pulp-style readership; it seems an ideal book for airport bookshops, something to be picked up for idle entertainment on the way home from a business trip. It does not affect any inside knowledge of how people talk and think in the “West Wing,” but rather stays in the reader’s comfort zone of stereotypical impressions. That’s a decision that makes sense, it seems to me, and the book gains strength from it. It’s a fantasy, a “thought experiment” — and it takes itself just seriously enough to draw the reader in. (Or at least, I hope so; like I said, I’m already convinced, so what do I know?)

Somehow John Duncan, the President of the United States, a moderate Democrat, manages one morning to disguise himself in a baseball cap and elude the US Secret Service, to take an unescorted walk and experience a Moment of Clarity. He is soon discovered by panicky agents, of course, and the media have much fun with this wayward behavior. Duncan’s moment snaps him out of his deeply circumspect habits of thought. It falls to his affable, muscular chauffeur, Harry Roberts, a crypto-Georgist, to give him the message he was destined to hear.

The novel could have used some editing. One thing that’s a little off-putting is the characters’ tendency to use characteristically British expressions. They cuss like Americans, yes, but they talk about cock-ups, people rabbit on about things, situations hot up; all, alas, rather British. Another sour note is the book’s tendency to equate real estate investment with criminal behavior; every unsavory character, including the oddly obsessed rock star Glit Jones, is a land speculator.

But, such small problems proved less and less annoying as the story unfolded, and, about two-thirds of the way through, I found myself rather in the grip of a page-turner. That can’t be a bad thing. There’s a hostage crisis, an affably forward-thinking British PM, a love story starring a sweet-voiced British journalist (who quietly charms the American people), and a worldly-wise corporate magnate who sees the cat and starts telling the world about location value. Not a bad read, all in all.