By Fred Harrison. Published by the International Union for Land Value Taxation and Free Trade, London, 2008. Review by Lindy Davies.

Harrison’s latest book, the first publication of the newly-revitalized International Union, makes use of the IU’s “special consultative status” at theUnited Nations by offering the UN some clear, pointed (and much-needed) advice. Its Universal Declaration of Human Rights, Harrison writes, is fundamentally flawed and must be amended if it is to serve any meaningful purpose. The issue of property rights is the fulcrum. It is ironic that the Western concept of property rights traces back to John Locke — despite the fact that Locke himself affirmed that all people are entitled to access to land. Forgetting this, today’s near-universal assumption is that fee-simple private ownership of land is both morally and economically sound. 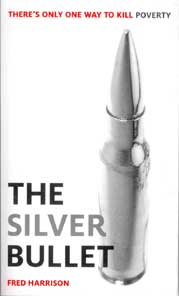 Those rights, however, are wrapped up in documents that display a curious opaqueness, as if there was something to hide. The UN’s Universal Declaration of Human Rights is the prime example. It affirms the right to private property in a way that (1) sanctions the deprivation of people’s human rights, and (2) legitimizes the appropriation of property that belongs to others.

Harrison asks his readers to add their names to a petition to amend the Universal Declaration so as to correct these deficiencies and affirm a true moral basis of ownership (see sidebar). It’s a laudable campaign — yet, had the Universal Declaration affirmed these rights in the first place, it needn’t have been nearly as wordy and vague as it is in numerous areas that touch upon the tension between public and private resources, and responsibilities. It may be that a brand-new “universal declaration” is really what’s needed — but Fred Harrison does the service, in any case, of showing the root of the UN Declaration’s insufficiency. It might be said that, lacking this clear fundamental determination of property rights, the United Nations could only produce a document that was too vague to really be taken seriously.

The Silver Bullet is forthright and clear: it insists on the fundamental importance of the issue of land tenure and land rent. Unlike “more palatable” analyses, it avoids the trap of distinguishing between “resource rents” and the rental value of all natural opportunities. By insisting on the inclusive definition of rent, and, indeed, by sticking with the term “land,” Harrison makes sure not to obscure the all-important issue of financial control of urban location values. This choice, while refreshing, useful and important, probably diminishes the book’s potential as a “blockbuster.” But that’s OK: it’s not so much a criticism as an acknowledgment of fact. Harrison writes as though everyone can see how obviously correct Georgist political economy is — and indeed, why shouldn’t he?

For decades Georgists have called for “a new P & P.” Fred Harrison has labored mightily to provide such a mass-outreach tool, and he’s come closer to doing it than anyone else has. Yet it seems clear to me —dearly as I hope to be wrong about this! — that he hasn’t achieved it. The reason, I think, is not any fault of Fred Harrison’s (though he does seem, at times, a tad jealous that Jeffrey Sach’s prophetic journeys got so much more traction than did his own). The reason is that the very notion of “a comprehensive solution to economic and social problems” has been so thoroughly shot down for so long, by so many credentialed experts, that it seems bizarre — outlandish — to suggest such a thing. Reasoned argument and clear evidence are strong, but the tide of public perception is mighty indeed.

This may make the task sound hopeless, yet I don’t think it is, and indeed, The Silver Bullet provides us with strong “ammunition.” As an introduction to the theory, practice and potential of Georgist reform in the 21st century, it is ideal. It offers an overview of development economics in the 20th century, from an unapologetically Georgist point of view. One of the many excellent talking points it offers is its overview of Botswana’s surprisingly positive economic history as a living refutation of the absurd idea of the “Resource Curse.” There are many more: the book is a superb resource.

I might have wished for a less violent-seeming metaphor, though. Could the book’s cover, with its big, gleaming missile aimed at the word “KILL,” seem, at first, uninformed glance, to call for some kind of Malthusian “final solution?” Let’s hope not. In the end, I’m convinced that there is a “silver bullet” for ending poverty, and I think Fred Harrison articulates it well. Now if only there were a “silver bullet” for getting that point across.