Living the daily struggle that George writes about in the last chapters of Progress and Poverty, wherein he warns against the inadequacy of the facade of political democracy wherever the distribution of wealth is unjust, we all must have our observations of the absurd twists of reality which are children of such a system.

Our Comprender La Economía course, which was to officially start on September 11th, had to be pushed forward to the next week due to announced electricity rationing for that week at the hour of our class. The next week, our Friday class was cut short in the middle by an unscheduled power cut. The same happened twice during the next week. At this stage, we are hoping to be able to complete the last classes of the course this coming week.

As I begin translating Bob Drake’s version of P&P to Spanish for use in the course here, I have reached the part in George’s prologue where he says that political democracy without economic opportunity will lead to anarchy and despotism. I guess I don’t need to tell you who live in the USA about that, but down here, it seems to me to be like living in an accelerated movie on the subject, as if there were people behind the scenes daily working on new ways to demonstrate this principle. For instance, when the privatized power companies decide to turn off the electricity, everything on the grid goes off, including street lamps and traffic lights. When that happens, rarely are there police to direct traffic in the day; at night, never. Friday night, as I was driving back from the class, I witnessed a near accident at an intersection which was a direct result of this situation. It is also a miracle that people don’t routinely drive into the many open manholes — they are often stolen to be sold as scrap, and not replaced by the government. Private cars (touted as a flagship sign of “progress”) clog the narrow streets, while the bus system degenerates. People buy their own generators, if they can afford to. The water cut-offs, supposedly a result of the power shortages, but probably also a strategy to soften up the population to accept the privatization of the water supply, are also turning potable water into a highly valuable private commodity. Everyone needs to store water to guard against a sudden cut-off (in the poorer areas, this can last up to sixteen hours) and there is a growing market for private provision of water via trucks. People buy up large barrels and water tanks if they can afford it — and the costs got up for everyone. You can clearly see the growing anarchy, as the naturally communal functions of government are shifted to the responsibility of the private sector.

Today’s newspaper says, “Potable Water Service About to Collapse” and in another story, “Puerto Cabezas [city on Nicaragua’s Atlantic coast] Without Water”. Given what we live with now, that could be pretty serious. According to the Director of the national water company, if the company does not receive significant new funding, potable and waste water services will be severely interrupted by December. That doesn’t look good, for living or building. As it is, we only have a piddly stream of water from 10pm to 5pm at the IHG building site. If that water crisis materializes, people will be fighting to buy water from trucks — and you can imagine what the prices will be like. 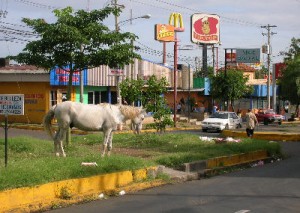 Still, as I write these lines, the georgist in me is rubbing his hands together because I sense a great opportunity to reach our students, and the population at large, with the truth of our message, and the feasibility of the solution we offer. Those who work in psychological therapy tell us that to make a successful intervention, you need to have leverage with your patient, that there needs to be a motivation, and even better, an urgency on their part, in order for them to want to change, to get better, to participate and benefit from therapy. This is what I sense happening here and now.

Since I wrote the above, last October, a hotly contentious national election came to a head, and we are now one month into the new government. The electricity rationing is down to a minimum, and the water company is undergoing major reform. Daniel Ortega took over the government with what seems, to most observers, a very mature and responsible attitude of reconciliation. Even his political foes, including the US government, admit that the new Sandinista government seems to be setting the bases for an attempt at inclusive and stable government. The mood among the population is”wait and see,” but as the days pass, a new optimism seems to be creeping into the public mind. How this will effect the IHG’s efforts to educate the people, institutions and government of Nicaragua remains to be seen, but the IHG is already experiencing increased positive results and perceiving growing opportunities. For example, the new Director of the state-run water company led Nicaragua’s most outspoken consumer interest lobby! It is as if George Bush appointed Ralph Nader as the head of the EPA! The fact that the Señora Herrera has been a cordial ally of the IHG over the last few years strikes an all the more optimistic note for us. She has offered to receive members of our group to assist them in sending the IHG tax reform proposal to the national Congress.

Another good sign is that the IHG’s first CE course of the year filled up to over capacity (86), and the phone kept ringing three days after the course started. It seems that people are starting to allow themselves to feel the possibility of real change. Our only concern would be that the Sandinista government may miss the boat and fall into some of the same traps which alienated the private sector and seriously eroded the national economy (including astronomical inflation). But those concerns are in the background because, in fact, 1) we are not back in the 1980’s with the US government mining Nicaraguan harbors, blowing up bridges and health clinics and promoting guerrilla war against Nicaragua; 2) Nicaragua is now part of the growing political-economic bloc of governments which offers support for reasonable reform initiatives, and 3) the new Sandinista government seems to have learned humility and practical wisdom in the process of losing three presidential elections over the years.

So, though you still have to be on the lookout for missing manhole covers, there is real reason to be optimistic, and we feel a sense of urgency to move ahead with the planned expanded activities of the IHG project to take advantage of what seems to be a window of opportunity in Nicaragua.