This year’s CGO conference, sponsored by the Henry George School of Chicago, didn’t cover every single thing today’s Georgist movement is up to, but it came pretty close. By downplaying local outreach, conference planners allowed themselves the freedom to offer a refreshing variety of presentations. Georgists were able to sample from a smörgasbord of ways that today’s Georgist message is presented to different audiences. Beyond our much-needed annual “recharging of batteries”, this conference offered a good bit of food for thought. 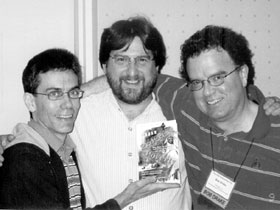 The conference officially began with a highly convivial reception in honor of Bob Drake’s abridgment/modernization of Progress and Poverty, which has just been published by the Robert Schalkenbach Foundation. Drake described his painstaking work to maintain the structure and the rhetorical power of George’s work, while bringing the overall reading level into the realm of manageability for most modern readers. He stressed that the new edition is not designed as a replacement for the original, but as a popularizer, which should, if it succeeds, serve to bring more readers to George’s original works. The new edition is an “idea-by-idea translation” of the original, faithful enough that the standard Henry George School lesson materials can be adapted to it without change, except for page-number references. The debonair Mr. Drake ensconced himself at the book-signing table, where RSF proceeded to sell all of the 100 advance copies it had brought to the event.

There had been a full day of activity prior to the conference’s official kick-off, however. Common Ground-USA held its annual meetings, and the Henry George Schools held a full-day Georgist education workshop, at which all manner of brain-stretching stuff was disseminated.

Major sessions began with panels on city planning and public transportation, the only scheduled presentations which were really germane to the conference’s stated theme, “The Self-Supporting City”. Ed Lawrence, a city planner who divides his time between Chicago and Fairhope, Alabama, set the stage with a well-illustrated overview of the particular urban phenomenon of “the downtown”, and its importance to civic and economic health. Paul Justus discussed the role of “smart taxes” in achieving New Urbanists’ goal of “smart growth.” In the transit session, Art Lyons analyzed the Byzantine politics of public-transit funding, and Ed Anderson offered a fantastic vision of a personal-pod public transit system that would, if feasible, seriously jack up land values.

After Brian Lozell’s fact-packed luncheon speech on how Chicago rebuilt itself after its catastrophic fire (yet another lesson on the economic power of land), we set out on a pair of very engaging and informative tours. First, (after an all-too-familiar train delay) we took an elevated-railroad tour into the city, and were treated with fascinating (but sometimes hard to hear) commentary on the history and economics of Chicago’s celebrated “El” by in-car guides Ray Degroote, Dave Wilson and Adam Kerman. 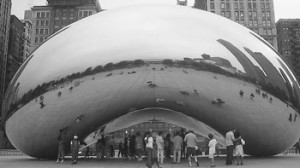 The Bean (a.k.a. “Cloud Gate”) in Millennium Park

Then, we boarded a downtown riverboat for a truly fascinating “architectural tour” of the Chicago River and Lake Michigan. Newcomers to Chicago soon learned how justifiably proud its denizens are of the city’s architectural heritage. The city’s proudest buildings show off to best advantage from the river, and the tour amounted to a short course on the history of 20th-century design.

Friday’s sessions highlighted the conference’s varied offerings. Dan Sullivan and Lindy Davies debated the efficacy of Henry George’s free-trade politics. Matt Harris vividly demonstrated the potential of GIS technology to demonstrate the economic impact of urban land. Chuck Metalitz introduced us to some of the modern “robbers” — intellectual property, the “building permissions” racket, and the taxman — who line up to grab rent before the final monopolist, the landlord, gets what’s left. Cay Hehner explored the historical dynamic in which Georgism must now fill the ideological void left by the dropping-away of Marxism. John Kelly wowed a packed session on the broad and deep biblical support for the basic tenets of Georgist political economy. Finally, Heather Remoff’s “Reading the Cat” program showcased a wide variety of Georgist creative writing, from op-eds to poetry, a screenplay and a heroic fantasy.

At the annual Gala Banquet, Bob Drake’s keynote speech had a good beat, and you could dance to it, despite its square-ish title, “Why Are We Here, and Where Are We Going?” Bob’s speech rocked the house, but not too hard, for it served as a warm-up act for his wife, jazz singer Spider Saloff, who gave us a tasty musical dessert, performing jazz standards with soul and wit, for too short a time.

The final session of the conference program was a curiously disjointed strategy session, with a panel of Dan Sullivan, Stephen Zarlenga, and Yolanda Brown. Perhaps the stated goal of “Building the Movements for Monetary Reform and Land Value Taxation” was overly ambitious. Some good general points were raised about how to approach strategic thinking in general, but no unifying themes emerged. 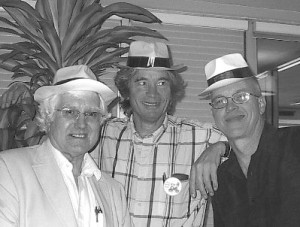 On a mission from G-d.

But that probably shouldn’t have been a surprise; after all, the session wrapped up a conference whose particular strength was in its showcasing the remarkably wide variety of Georgist analysis and advocacy.

Last, but not least, was our traditional “friendship brunch.” The occasion was appropriately silly. Sue Walton presented day-glow “Blues Brothers” fedora-and-shades to “team CGO” members. We offered toasts to our colleagues near and far, to good work done and huge tasks ahead.