(and What to Do When There Aren’t Any)

On Friday, July 21st, the 150th anniversary of Illinois Central suburban service was observed. The Illinois Central was founded by a land speculator to promote development of Cairo on the Ohio River, and by politicians, including Abraham Lincoln and Stephen Douglas. Douglas, then a United States Senator, was instrumental in securing the federal land grant for the railroad, the first in the nation. The land grant was turned over to the state. Lincoln used his connections in Springfield to quash bids for rival railroads. The city of Chicago wanted a breakwater built to protect homes built too close to the lakefront on the south side. Because no one elsewhere benefited, its construction was politically unpopular. Solution? Force the railroad to enter the city on a right-of-way it did not want — submerged lands along the lakefront, far from industry. Douglas, who owned some of these submerged lands, sold right-of-way to the railroad and was rewarded with a seat on the board for his efforts in securing the land grant. 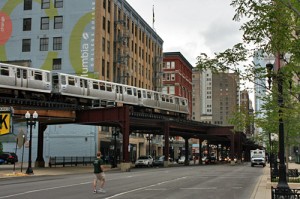 Paul Cornell was another land speculator. He owned 300 acres in what is now the fine neighborhood of Hyde Park, home of the University of Chicago and Museum of Science and Industry. Then, it was badly located, well outside the city limits. He deeded right-of-way to the railroad in return for daily suburban service to his property. Significantly, the service was operated at a loss for several years and had to be subsidized by Cornell. Eventually, the railroad would stimulate suburban development along the lakefront.

Today’s politicians have not forgotten the relationship between transportation and land value. House Speaker Dennis Hastert, who represents an area at the far western edge of metropolitan Chicago, has held farmland in Kendall County for years. He recently received a $2 million profit on land he sold. He has also secured $207 million in federal funding for the Prairie Parkway through Kendall County, a few miles from parcels he owns.

Ten years ago, the Regional Transportation Authority hired a consultant to learn of the effect of passenger railroad stations on residential property values. The consultant found a positive effect on single-family home values within 5000 feet of the stations. At 500 feet, premium is 25.8% — nearly $52,000 in 1996 prices.

Is it possible to capture some portion of land value to pay for the cost of necessary public transportation? For instance, a typical minimal Metra cost — three-man crew (one in the engine and two on the train) plus fuel and running maintenance — amounts to about $1 million a year, equal to the premium enjoyed by 20 of the best-located homes.

The Orange Line to the southwest side and Midway Airport opened 13 years ago. Intriguingly, the authors of a 1994 study found that residential land values within one-half mile of the stations were 17% higher than they otherwise would have been in 1990 — three years before the line would open. On opening day, it was 20% higher. They also found that the increase from improved transportation was 1.9% per mile from the central business district for sites within one half mile of train stations. They felt that, even by 1994, the market had not yet fully adjusted to the presence of the new rapid transit line.

A 2005 Brookings Institute study argues that the cost of transportation is critical to determining true affordability of housing. After all, it is the second highest cost in the household budget. They’d like their affordability index used in calculating mortgage and rental qualifications to avoid social policies that would force lower-income families to outlying areas with poor public transportation options because transportation costs are ignored in computing the cost of housing.

They found that, regardless of income, people in areas near train stations had lower transportation expenditures because they drove less and owned fewer vehicles. They argue that social policies should change so that housing suitable to families with a variety of income levels should be built near train stations. In the Chicago area, they found that the area around 32 stations in the city was higher density, 32 units per acre, and had the highest percentage of non-auto commutes, 38%. At 178 stations, 30 in the city, they found wasted potential as low as four units per acre and 11% non-auto commute. They found greater income diversity in the suburbs near railroad stations; in the city, they found greater racial diversity. Curiously, the study’s authors observed that the forces of gentrification were resulting in both more expensive housing replacing affordable housing and fewer total units of housing within a short distance of rail stations.

In the last ten years, housing prices have increased dramatically. This has not resulted in recovery of many neighborhoods in the city — even those areas near rapid transit stations. In certain parts of the west and south side, looking out the window of a rapid transit car, one sees lot after lot either with dilapidated buildings or long-vacant lots, probably cleared at taxpayers’ expense. This is still true years after the rapid transit lines were rebuilt at tremendous cost to the taxpayers. Would implementation of site value taxation be enough to overcome social problems that could allow these neighborhoods to recover?

In the Victorian era through the 1920’s, when the rapid transit was new and the city was filling out, pleasant communities would develop with transportation, shops, and services all within walking distance. Efficiently-placed rapid transit and commuter railroad stations were a key factor in encouraging this pattern of development. In that era, there weren’t zoning restrictions preventing the construction of multiple-family housing. There weren’t minimum requirements for off-street parking. Would eliminating these restrictions be enough to allow these neighborhoods to recover?