Every working person knows instinctively that the way to get a raise is to limit the competition. That’s the only way labor unions have ever gotten their members a higher wage. Doctors and Lawyers must have expensive degrees and licenses. Master craftsmen don’t go around teaching everyone else how to ply their trade; apprentices must wait on them hand and foot for years before learning the craft. The market for labor depends on supply and demand like any other market — and opening the borders is one sure way to keep the supply of labor high, and its wages low. 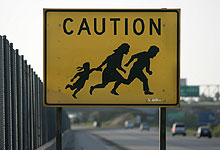 Labor is drawn to the employer with the highest wages. If Mexicans work in the United States, and support families in Mexico, the difference in the cost of living between the two countries makes a profound difference in their ability to accumulate wealth. There is a great temptation for young, strong and ambitious Latinos to sneak across the border, work for a few years and save enough money to buy a house or start a little business when they get home. This is what adventurous young men have done in every era.

So, as long as America is the land of opportunity, higher fences will increase the profitability of illegal immigrant labor. Why? Because the guy who shows up for work will not only have walked across the desert, but also climbed a 50-foot fence! He’s worked even harder to get here to take a job that pays less. Under such circumstances, the demand for illegal workers can only go up.

Could the United States seal the border? Probably. The cost would be comparable to, say, building a 2000-mile interstate highway from scratch. We could send millions of Mexicans back to Mexico; that would raise wages in those industries that currently hire illegals. But (unlike the highway), it would decrease overall production by increasing production costs without increasing worker productivity.

The vast majority of Americans consume the products and services of illegal workers — but only a small segment of American workers compete with them for work — and they are poor workers who lack political clout. Therefore, we shouldn’t expect the political process to stem the flow of illegal immigrants.

The population is probably not increasing as fast as the number of immigrants would suggest, because our domestic birth rate has declined. But, here is the real consolation. As the population of the United States has increased, so has the general level of productivity. During the last 20 years, while US population increased by about 20%, labor productivity increased by more than 47%, after inflation.

How many people the US economy can absorb under the present conditions is not clear, but if we look at some other prosperous countries, we get a clue. The number of people per acre of arable land in France is about 850; Germany, 1800; The United Kingdom, 2500; The Netherlands, 3500; and Japan, 8,000. The United States still has less than 400 people per square mile of arable land. We are not likely to have too many people any time soon.

Did the first Europeans get anyone’s permission to immigrate to their settlements at Plymouth and Jamestown? What gives a group of people the right to claim a specific part of the Earth, declare it a nation and close its borders? Most of today’s “illegal immigrants” in the US are descendants of the people who walked across the Bering Strait from Asia between 10 and 20 thousand years ago. If claiming something made it yours, I’m sure they would have uttered those words, as they made their way south and east into Mexico and beyond. — M. C.

However, while the average American worker now produces nearly half-again what s/he did two decades ago, real wages have stagnated or declined. The buying power of the minimum wage has tended downward for four decades. Most people don’t share in the benefits of all this increased productivity — and our communities grow ever more inefficient, soulless and unsustainable.

Surely there’s a better way. Look at Singapore, and get a glimpse of what is possible. At 14,000 people per square mile, it is one of the most productive countries in the world. Who knows how many people the United States could support in a just and prosperous society? Each of our major cities once supported many more people than it does now. Not only could we rejuvenate urban slums and provide healthy and comfortable housing and jobs for many more people, but we could create an orderly development that provided open space and park land in the suburbs without the sprawl that creates such intolerable waste.

Taxes now total about a third of the nation’s output. By shifting those taxes — from income, sales and buildings, to the rental value of land — we would encourage people and business to hold the smallest amount of land they could, and produce as much as possible on it. People would save by living in apartment buildings and sharing a view. Business would build the highest buildings that were profitable, and land-hoarding would stop.

Within sight of the skyline of every city, there would soon be land without market value! It might be good for building houses, or growing crops. It might be a perfectly suitable location for a small business — yet, because other land would be in such greater demand, this land could be used without any payment of rent! No one would work for someone else, unless they were offered more than they could produce working for themselves where the land was free.

Those who held the superior land would fund the costs of government by paying rent for their land. Every increase in productivity would (as it does now) increase the rental value of superior lands, providing more revenue for the needs of society — while increasing the amount that could be produced where the land is free. Under this arrangement, every additional person would increase the quality of life for everyone else — and this process would not cease until, at the point of diminishing returns, workers no longer desired to come here seeking work.

We could open the border and declare “the more the merrier.” As each person left Mexico and Central America, the value of the land in those countries would fall. In self-defense, their ruling families would implement some competitive measure to draw their workers back. Aside from shooting those who tried to leave, the only way to do that would be to raise wages.

We know that a serious tax shift that encourages the most efficient use of our resources will take time. I propose three ameliorations for the transition period: 1) We should peg the Minimum Wage to the GDP. That way, workers too, share in the benefits of increased population. 2) Let’s have the government provide minimum-wage jobs for everyone who’s willing and able to work. They can clean up the highways, fix up the parks, and replant the forests. This way, the government will have a vested interest in not letting more people in to the country than can be economically employed. 3) There is always a shortage of affordable housing. Let’s have the government provide enough public housing so that everyone on the Minimum Wage can get decent shelter at an affordable price. If we do those things, we will have eliminated the ill effects of illegal immigration on our own citizens.

However, in a few years, we’ll have another recession. What are we going to do with our non-citizen workers then? In the 1930s, they were sent back to Mexico, where there weren’t enough jobs in the best of times. If we welcome people into the country to work, we require them to fulfill all the obligations of a citizen. They play by the rules; they pay their taxes. Shouldn’t they deserve our support when there’s a hurricane or earthquake — or depression? Let’s give them citizenship as well.