“Land Tax is Back on the Agenda”. So reads the heading of an article usefully reprinted in November’s Comment, from its earlier publication in the  of 15 October. “Usefully”, because I suggest it is well for us, at this early stage in the matter, to grasp what an appalling misnomer the term “land tax” is!

In the first place, it is not land (implying acreage) that is taxed, but the land’s rental value — a value which can rocket in urban areas in even the mini-est of sites, as we know. Now these rental values exist — in some cases astronomically — whether land is up for development or not, so why should the government wish (as now seems likely) to step in merely at the point of a new development gain? Surely, in justice, either these rental values should be collected by society from every site, or none should be taken at all. For new development gains will achieve, simply, sudden new leaps in that same rental value — (recalling that all “capital values” in land refer back to rent). 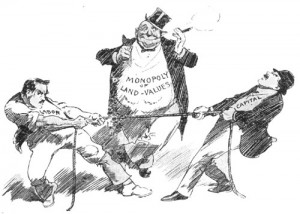 Secondly, if we decide that these rental values should indeed be taken by society, then no complex program of taxation is required to capture them. Simply — society opts to collect them, 100%, from every site.

Now would this be fair? Here we are confronted with a basic aspect of revenue-raising, since any proposal must be seen to be just if it is to gain public support — (a test, we might remark, scarcely passed by taxation!) The answer is, the community collects its rental values back. No community, no rental values! And this stands, whether there is a development permission or not, since it is the need of us all for space on this Planet which gives rental value to land.

There is another feature of land rental value which commends it particularly for our revenue — it is something that not only arises with a community, but increases with that community’s growth. Henry George drew our attention to the beauty of this natural law: that, as a community arises and grows, there arises naturally with it its own fund — a fund uniquely social in its origins — from which to meet all its social needs; and it grows as the community grows.

If such a socially-sourced fund already exists for us, right to hand, from which to meet our social needs — then what is the whole taxation business about? Can we possibly have stumbled here on the source of that never-ending gap between the rich and poor — not to mention the “widening black hole” in the Chancellor’s budget calculations?

Very likely, since revenue-raising via taxation is mightily self-defeating. Which of us does not know of people who have given up on working harder or longer hours, because “most of it will be taken in tax anyway”? And what about those famous (or infamous) tax havens abroad used by the super-rich? Or who can calculate the amount of tax lost through private cash transactions, prompted by the natural indignation felt by those who labour, that their work is being robbed of its rightful return?

If we can only see it, the failure of taxation to meet society’s needs is already written into the sloppy, self-defeating formula on which it is based — “from each according to his ability, to each according to his need”. A school teacher, doing a bit of education on the aside, once asked his class what would happen if, when exam results were read out, those having 90% were asked to forfeit a sizeable chunk of their marks, to meet the “needs” of those in the 30% range? What would be the effect upon both the 90s and the 30s?

The trouble is that, so attuned are we to the ethos of a society in which so many live in poverty, we simply cannot imagine how things might be otherwise. But the question of land rent serves us with a powerful wake-up call, presenting as it does the possibility of a new and invigorating formula, one which makes justice its bottom plank: “from each according to what he receives from the community, to each according to what he contributes to it”!

We live in a society which is truly topsy-turvy — one in which the rental wealth it creates flows to those who have not made it; while the members of the community who have created that rental wealth not only do not receive back their rightful share in that wealth, (a proportion of which could well be paid as a social dividend to every citizen), but in addition are clobbered with taxes, so suffering a doubling of the unnatural burden they bear.

If we have the smallest social conscience, we must see that the time has now come for us to take a decisive step, and to change course.

To turn to the earlier question: what is the whole taxation business really about? In brief, a centuries-long cover-up! And a cover-up it is high time that we awoke to. This cover-up is, of course, easily maintained by the false term “land tax”, which gives no hint of the real community-created values attaching to land, and hence of the robbery of the community that continues, day-in day-out, under present land tenure. Here we see how cover-up, aided by falsification and mis-education, can hold a society down for a very long time!

From an op-ed published in the Press & Journal of Aberfelby, Perthshire, Scotland, December ’05 . Illustration from the centenary edition of Good Government, Dec. ’05