Economists are lionized in our culture. Corporations, financial institutions and government departments make no moves without consulting them. Yet most of them are confounded by the pernicious riddles of modern economics. Sometimes it is alleged that our very existence depends upon their exposure and elimination.

Fred Harrison, in his new book, Boom Bust, building on earlier works such as The Power in the Land (1983) and The Corruption of Economics (with Mason Gaffney, 1994), asserts that not only are most economists wrong on a great many issues, but that their whole universe of discourse is a self-deployed illusion. It is as if the medical profession were encapsulated in Burton’s Anatomy of Melancholy (1639) and had no objective terms of reference (such as the modern science of biochemistry) to escape therefrom. To Harrison, the entire contemporary edifice of banking, fiscal policy and taxation rest on a virtual alchemy, of pathological taxation and magic mantras.

The italicized words appear in the chapter titles of Boom Bust. It’s no secret that this is a polemic, a vigorous exercise in public advocacy. The riddle is the business cycle. The paradox is the “benign perniciousness” of volatile house prices. Mephistopheles appears in the form of banks, Chancellors of the Exchequer — especially the current one — and evil itself in the guise of land speculation. Purgatory for us all will be the collapse of the global real estate market around 2010, leading to huge economic dislocations, credit rationing, recession devolving into depression, middle class impoverishment and general societal decrepitude.

Harrison’s title sets a tone of overstatement that will put off some readers. They will be joined by skeptics who look disdainfully upon “apocalyptic economics”, gleefully recalling Ravi Batra’s failed predictions of depression for 1990. The economic depression of the 1930s is a unique historical nightmare that few today regard as repeatable. There was a severe recession in the early 1990s. It did not become a 1930s-style depression, although some countries, such as Japan, have still not shaken off the after-effects.

Yet Harrison has enough documentation — including agonizing statements from Chancellors of the Exchequer and the Federal Reserve Board — to make us sit up and notice. If, as you read this book, you were to glance at your portfolio statement which describes your rock-solid investments in real estate, it might arouse some degree of suspicion. Harrison would not be impressed. He dismisses the current economic “groupthink” as the explanation for the numbing homogenization of modern economic discourse.

Discourse, its modes and manipulations, both political and economic, is integral to Harrison’s thesis. In the Prologue he quotes Irwin Stelzer on how Alan Greenspan is “famous for his ability to use language in such a way that it ceases to be a means of communication.” Harrison disparages the “economic metaphysics” of the dismal science and its equally dismal political mouthpieces. Definitions, language and statistics are no doubt muddled in modern econospeak, but perhaps that is how the all-important metaphysical foundation of confidence is maintained. After all, confidence is the ghost in the business cycle. If the current ever-rising land prices were factored into the inflation statistics, then the result would be 20% interest rates! Harrison wants us to discard the language of modern economics and go back to the classical statements on value, wealth, economic rent and the theories of equitable and efficient taxation found in Adam Smith, David Ricardo and Henry George. 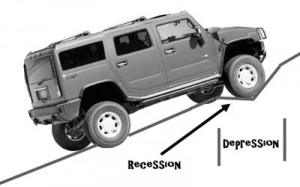 Harrison’s core thesis is that there is an eighteen-year real estate cycle — not a law of nature, but a product of perverse economics and hijacked political institutions. The history of the cycle is analyzed in some detail. Most of us have lived through several of these cycles; 1956-1974, 1974-1992 and the current one, forecasted to bottom out in 2010. Harrison also notes the mid-cycle recessions in 1965, 1983 and 2001. His thesis states that the regularity of these cycles cannot be explained by disequilibrium of supply and demand, or external economic shocks, or manic speculation on the stock markets, but the misallocation of capital into a speculative real estate, or more accurately, into land speculation. (It is essential that “land” be correctly defined as any of the givens of nature, such as the electromagnetic spectrum, airport landing slots or your average 50 by 90 municipal building lot.)

Harrison rails against the people and institutions who have blithely allowed economic rent to be privatized rather than returned to the coffers of the community. We should not rely on income and sales taxes to run society. Here is another exquisite irony of modern economic life, according to Harrison: we are “simultaneously both windfall winners and income losers.” Politicians have done everything possible to ensure that we are not taxed on our unearned gains from real estate ownership. It is with the earned income that you must render tribute. It is no wonder the Romans called their finance ministers Counts of the Sacred Largesses. The only revenue agents who focus on the windfalls in the real estate market are the lowly and much-despised property tax assessors.

Harrison shows that the conventional view of monetary policy — as the principal weapon of economic stabilization — is another grand illusion. The eighteen-year boom-bust cycle has persisted despite the inflation-fighting objectives of monetary fine-tuning. Increasing rates to cool real estate speculation tends to plunge the manufacturing sector into recession. Modern economists chalk this up to providence — but Harrison sees the pattern as all-too-human, and thinks that the governmental capture of economic rent would put a stop to the madness.

Are we hard-wired for gambling? The casinos are not short on customers, as governments have lucratively discovered. Homeowners have found the banks more than willing to gamble on the seemingly ever-appreciating price of real estate. If Harrison is right, the 20% and 30% increases of recent years have created a mortgage-debt monster, and trading-down in the house market, instead of up, will become the fashion of the next decade. But its nastier by-products, such as homelessness, environmental degradation through urban sprawl and the misinvestment of capital will be the ever-present headache of future politicians.

Harrison wants us to establish a system of institutions and policies that will ensure economic stability and equal prosperity. For him, the only other option is to wallow forever in the gyrating economics of real estate speculation and boom-bust cycles.

Francis Peddle is a Professor of Philosophy at the Dominican University College in Ottawa and a lawyer in private practice. His is the author of Cities and Greed.