It is the general view that the US economy has outperformed most of the rest of the world in the past several years. Judging by real GDP growth rates, this is true. Yet the reason why is obvious, easily explained, and disastrous in its consequences: the US credit machine has no parallel in the world. It is geared to accommodate absolutely unlimited credit for two purposes — consumption and financial speculation.

There has developed a tremendous and growing imbalance between the huge amount of credit that goes into these two uses and the minimal amount that goes into productive investment. Instead of moving to rein in these excesses and imbalances, the Fed has clearly opted to sustain and foster them.

Today it is customary to measure economic strength by simply comparing recent real GDP growth rates. It always becomes fashionable when US economic growth is higher than in Europe. 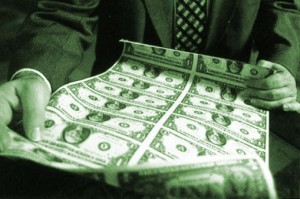 From a long-term perspective, however, economic policy and economic growth are about “physical resource allocation”, that is, available tangible capital stock and labor. How much of the current production is devoted to consumption and how much to capital investment? Looking for economic health and strength, generations of economists have focused on two economic aggregates: “Savings and investment” — in particular net savings and net investment.

It used to be a truism among economists of all schools of thought that the growth of an economy’s tangible capital stock was the key determinant of increased productivity and subsequently of good, high-paying jobs. And it also used to be a truism for economists that from a macroeconomic perspective, tangible capital investment in factories, production equipment, and commercial and residential building represents the one and only genuine wealth creation. But in today’s new money culture, policymakers and economists make no distinction between wealth created through saving and investment in the real economy, and wealth created in the markets through asset bubbles, engendered by extremely loose money and credit.

In 1996, an article entitled “Securities: The New Wealth Machine,” (yy John C. Edmunds in Foreign Policy) explained how securitization — the issuance of high-quality bonds and stocks — has become the most powerful engine of wealth creation in today’s world economy. Whereas societies used to accumulate wealth only slowly, they can now do so quickly and directly, and “the new approach requires that a state find ways to increase the market value of its productive assets.” In such a strategy, “an economic policy that aims to achieve growth by wealth creation therefore does not attempt to increase the production of goods and services, except as a secondary objective.”

This is a perfect description of the current economic thinking that is today ruling our world, not only in corporations and the financial markets, but even among policymakers, elevating wealth-creation, that is, bubble-creation, to the ultimate of wisdom in the policy of economic growth.

It is not profits, savings and investment that drive America’s economic growth. It is America’s unparalleled credit machine, and that alone, which makes all the difference in economic growth and wealth creation between America and the rest of the world.

All the economic growth of the past two years, anemic as it was, is traceable to a seemingly endless array of asset and borrowing bubbles.

The US Fed and its army of member-banks, in effect, have become serial bubble-blowers. First the stock market bubble; then the bond bubble; then the housing bubble and the associated mortgage refinancing bubble. As a result, consumer spending has been surging well in excess of disposable income for years.

The idea was that sustained and rising consumer spending would in due time stimulate investment spending. It has grossly failed to do that. My assumption rather is that consumer spending will slow as the asset and consumer borrowing bubble are sure to fade. Seeing no big investment recovery, I expect a surge in inflation on all fronts, on consumers and producers as well.

Abdelmenem Jamil Addas is a professor of financial markets, at the College of Business Administration, and a student at the Henry George Institute. He is based in Jeddah, Saudi Arabia. This article originally appeared in arabnews.com.