“The new Mason Gaffney book” is a major event – well, among Georgists, anyway – and I’m going to rave about it. It’s as clear a statement as one is likely to find of a message that desperately needs hearing. The only bone I have to pick with it has to do not with what it says, but – alas – with how it is presented. We’ll return to that, ere we end. 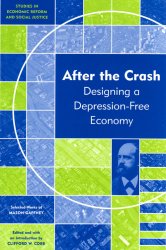 After the Crash contains three essays. In the first, “The Role of Land Markets in Economic Crises,” Gaffney’s case is laid out with virtuosity, adding his own observations on cycle development to the classic ones of Homer Hoyt. Light dawns after passages such as:

A rise in land prices cannot simply flatten out at a high plateau because the increment has become part of the expected return that buyers are paying for, and lenders are relying on. So prices that cannot rise further have to drop: there is no equilibrium level at the inflated prices of the boom.

Gaffney adds one important element to Henry George’s theory of booms and busts. George held that speculative land prices simply go up and up until producers cannot pay them. Gaffney observes that recent crashes have been precipitated by a collapse of land value. This is a consequence of the Speculation overheats land prices in high-value locations – but people can get easy credit and they want to build. Demand increases for marginal locations – and taxpayers’ money provides the new infrastructure needed there. But, financing for sprawl development is based on the speculative- bubble value of land. So a point will inevitably come when land at the fringe is oversupplied. It can’t find buyers; loans can’t be serviced; the crunch is on.

Gaffney details the economic effects of real estate taxes on buildings, and on land, showing how building taxes not only retard development but also lead to greater inequality – because wealthier people tend to use more space, and the poor tend to be crowded into capital-intensive areas in which new building is more deeply penalized. He goes on to lay out in detail the familiar – to Georgists – points that taxation of land value, combined with frequent reassessment, confer both efficiency and equity benefits with no downside at all, slowing speculation and taking the air out of the bubble.

He surveys how the capital-intensity of production has accelerated throughout the 20th century – and, since the early 1970s, has done so while wages have declined. This is doubly striking when we realize that most statistics on this omit government capital – roads, public buildings, and great huge piles of military stuff. Not only that, energy has also been substituted for labor at an increasing rate. These processes jibed with conventional notions of efficiency, but they could not possibly be sustainable. Gaffney finds a fundamental misconception underlying these errors: the notion that capital is always interchangeable, and because it is made by labor, demand for capital always means demand for labor.

According to this view, all capital is like a hammer: it enables a worker to perform more effectively by complementing labor and increasing the value of labor. The idea that some forms of capital might substitute for labor and reduce wages and employment does not enter the picture.

In fact, there is capital, and capital. Large capital investments, which are almost always debt-financed over a long term, employ far fewer workers than does investment in other forms of capital. What other forms are there? Inventories, materials, crops – things that turn over quickly, and the majority of whose value is added by labor. Many advocate stimulating new house construction as a way to increase employment, but Gaffney shows that to be illusory. Don’t we need buildings? Well, yes – but when land and buildings are going idle, putting up new buildings – served by new sewers and roads – doesn’t help matters.

Henry George’s theory is necessary to the new basis for macroeconomics, but not sufficient. This is because George (along with Keynes) scorned the Austrians’ contributions to capital theory. According to Gaffney this has led to a blunder by followers of George, who – seeing capital and labor as functionally identical – have favored the un-taxing of capital, even if taxes on labor stay constant. Gaffney sees the main goal of macroeconomics as to maximize the input of labor – put people to work – while incentivizing the most efficient use of land and capital (including the use of land as a waste dump). In this regard, Gaffney displays an ability to pithily sum up thoughts that some of us have been trying to stammer out for years:

It is not a question of stopping growth. There is no need to divide into factions for and against growth. We can grow by combining more labor with the same land and capital. It is simply a matter of modifying processes and products and consumption. Each time capital recycles it can embody new concepts as well. Growth of capital is not needed for progress; turnover is. Since one way to substitute labor for capital is to turn over capital faster, this also accelerates embodiment of new knowledge in real capital.

The third essay in the book, “Money, Credit and Crisis,” was adapted from classroom notes for a college course on the subject.1 It is remarkable for its clear-headed placing of first things first, in laying out a monetary policy that is entirely consistent with the macroeconomic framework he is shaping. This is particularly useful at this historical moment, when so many people are exercised about financial-sector abuses, and so many monetary-reform concoctions are pouring forth. Gaffney explains how fractional-reserve banking, per se, performs the useful service of providing liquidity and credit in response to market demand. But it can – as we’ve seen – get quite badly fouled up, and the main cause of that has to do with the sort of thing that’s accepted as collateral.

Gaffney calls for a return to the “real bills” (a.k.a. “English Banking School”) doctrine of self-liquidating loans, based on collateral that turns over (relatively) quickly, and is never, ever land. (This could be mandated by regulation, but it might be observed that land value wouldn’t be available for collateralization if it had already been collected by the community.) The basic message is that the now-pervasive collateralization of land value (not to mention derivative instruments based on assets composed of collateralized land value) introduces failure into the banking system as a structural inevitability. It simply won’t do; it’s always been a bad idea, and it is the Elephant in the Room in any discussion of financial-sector problems.

Before we go: a few words on the book’s presentation. One can’t help but notice that its appearance, pricing, marketing, etc., are remarkably understated. True, it is a scholarly work for an academic audience, and such books aren’t supposed to toot their own horns too much. But come on: at 218 pages, the hardcover edition is priced at a whopping $45. Books like this seem designed to be archived rather than read. The small, spidery type of the American Journal, printed on glossy paper, is uninviting; you have to want to learn what this book says.

Something seems amiss if we compare, say, the diffident presentation of this incredibly important book with the all-out market blitz afforded to flapdoodle such as 2005’s The Fair Tax Book. Unfortunately, Wiley! Blackwell doesn’t do pop books. It’s too bad. Gaffney’s insights certainly deserve a wide readership, and he is a lively writer who could function well in a pop setting. Indeed, Gaffney’s occasional tendency toward glibness has been fully tamped down in this volume by the skilled, yet rather severe editorial hand of Clifford Cobb (whose name, oddly, appears on the spine of the book instead of Gaffney’s).

The middle essay, “A New Framework for Macroeconomics,” is longer than the other two, and seems to be marketed as the real intellectual meat of the book. According to the blurb on the Schalkenbach Foundation’s website, it “draws on the previous findings of Knut Wicksell, and demonstrates for readers how excessive investing in durable capital of slow payback can destabilize and then freeze our modern economy, which requires constant circulation and renewal of capital to function properly.” All very true — but could there have been a more arid way of saying it?