Economists seem to be on a mission to maximize complexity. Things like, say, monetary policy seem steeped in cabalistic alchemy far beyond the ken of normal citizens. It seems downright quaint that ordinary mortals like our students could come to any meaningful economic understanding. “In the real world,” we’re told, “things are more complicated than that.”

This should not be accepted uncritically. It’s true that many things are highly complex, intricate, even abstruse (the mechanism by which lengthened northern growing seasons caused by increased concentration of CO2 combined with decreased ocean reflectivity, can change ocean currents, alter birds’ migratory patterns and freeze the British Isles). Many more important matters – things that citizens need to know about – are much more easily grasped (quick shifts in the balance of atmospheric gases can be dangerous). For over a century now, Georgists have taught that it’s within the powers of any normally intelligent person to grasp The Big Picture in political economy. We should not be the least bit apologetic about this; it is a vital truth.

It’s quite important to be aware of the goal of an endeavor. What do we hope to achieve when we “study economics”? Market behavior is multifarious in the extreme. Competition is keen; predicting entrepreneurial success can be a highly sophisticated, data-driven process, and much of today’s “econ” is about the parsing of elasticities and quasi- rents: cascading torrents of data for graduate students to analyze mathematically and publish papers about. It’s great stuff to be sure, useful in analyzing situations; but it has precious little to do with the economic decisions faced by citizens, and nations – in other words, with the problems of poverty and “paroxyms of industrial depression.”

In Henry George’s political economy, the goal is to understand the natural laws that govern production and distribution. In service of this goal, the factors of production are defined as three – mutually exclusive and completely distinguishable in their functions. Anyone can understand that! The three-factor scheme is too simple for microeconomic analysis, and you know what? That’s fine, because microeconomic analysis isn’t what we are doing. No blame to people who want to do that; they can major in Econ, and knock themselves out. It’s just that when they try to tell us that our three-factor scheme is too unsophisticated, we need to – gently, but firmly – explain to them that in the real world, things are simpler than their equations. As a Georgist writer (me) explained,

Natural opportunities are functionally different from wealth, and can be clearly identified as such. The factors of production are plainly different from each other. Let’s imagine factor payments as three colors that get mixed together in the gross receipts of a firm: rent is green, wages red and capital- yield is blue. Mixed together, they become brownish-gray. It’s awfully hard to get any of the original colors out. But before they get mixed, Georgist policy calls for the land portion to be taken – while it is still green – and then the entrepreneur’s profit can be appropriately purple.*

Lately we’ve been told – by Georgist sympathizers, no less – that the simple three-factor, “single tax” model of the remedy won’t do, because there is a “money monopoly” that’s just as important as the land monopoly, the eradication of which is an equally high priority. Now, forgive me for being simple-minded, but I suspect this to be a complicating factor and, as such, I’m suspicious of it. 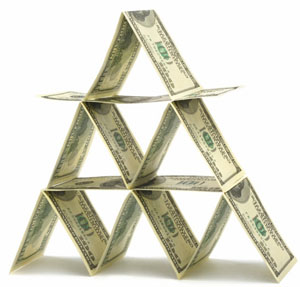 The basic thesis goes something like this: Money is essential to a modern economy. Efficiency leads society to adopt a universal money (having to use many competing currencies leads to confusion and waste). Government is the most universal and powerful force in society; therefore government should issue money (Henry George agreed that this does accord with an ideal state of things). Yet we persist, stupidly and unwisely, in allowing private banks to loan money into existence. Therefore, merely by using money, we place ourselves ever-more deeply into debt.** Since money in loaned into existence at interest, we can never discharge the debt, because the existing stock of money is always less than the interest + principal owed on it – so we are, essentially, screwed.

Mason Gaffney deals with this issue cogently in his recent book, After the Crash: Building a Depression-Free Economy. He explains how the basic factor that induces mischief and instability into the banking system is not fractional-reserve banking,3 but the collateralization of land value into a speculative sum on which the amount borrowed is based. This doubly-wrong feedback loop induces the entire economy to revolve around land speculation. The banking system is the hammer by which the wedge is driven.

However, if we live in a world in which land and its rent are private property, it becomes nearly impossible to see this, let alone entertain reforming it as a real possibility.

The forces of obfuscation – the conventional wisdom, in other words – are strong and resourceful. As we court their favor, they strive to corrode our understanding. Our main weapons against such corrupting influences are – as they have always been – sensible definition and consistent logic. That logic leads me to ask this: Suppose we ended fractional-reserve banking. The government would spend (rather than the banks loan) money into existence; the profits of seigniorage would accrue to the community. But the tax and land-tenure systems would remain unchanged. Would anything be even the tiniest bit better?

*In the Afterword to The Science of Political Economy, abridged edition, Robert Schalkenbach Foundation, 2006

**This is refutable in the space of a footnote. Yes, money is loaned into existence – but it is paid back out of existence. Interest is not owed on the entire stock of money at a given time, but rather on the amount of loans outstanding at that time, which is much less than the total stock of money. Once money is in existence, and used as a medium of exchange, no interest is owed on it – and this is by far the most common use of money. There are problems, to be sure, with public assumption of risk in various forms, leading to private privileges. But if risk is not socialized via deposit insurance and other guarantees, the process of money-creation by banks per se is neither unjust nor inefficient.