by Ed Dodson and Lindy Davies

Ed: In your response to the comments you received regarding your “Georgist theory of history” article, you make the statement that Fannie Mae and Freddie Mac have helped to “cement landed privilege in place” – so much so that the GSEs deserve to be called “the Devil.” Do you really believe this is the case?

How the GSEs affected the residential property markets, affected homeownership and even the distribution of rent within society requires a good deal of thoughtful discussion. When I managed the residential mortgage loan program for a bank, the GSEs enabled us to make fixed rate mortgage loans and sell them in the secondary market, allowing us to increase our lending activity without the interest rate risk. The creation of mortgage-backed securities then provided a mechanism for investors to acquire assets that could be sold in the same way any bond is saleable.

Fannie and Freddie accomplished some other good things. To give just a few examples: uniform forms of promissory notes and mortgages, uniform eligibility and creditworthiness standards, innovative programs to expand homeownership among minorities, women and first-time home- buyers — all developed in conjunction with housing counseling groups and other advocates for these underserved groups of people.

Lindy: Well, Ed, you’re right – it does invite thoughtful discussion. My “The Devil” remark was tongue-in-cheek, of course. But I did mean the underlying point, yes. It seems to me that if it weren’t for the Land Question, an awful lot of things in the “conventional wisdom” would indeed be right and true — and since the Land Question is so thoroughly blotted out of most conversations, those things really do seem right and true. One of those things, I suspect, is the “benefits” provided by Fannie and Freddie. I’m taking the radical Georgist view here — not the practical political one. If the entire economy depends on land speculation, and the tax system is biased in favor of home ownership, then it seems wise to help as many people become homeowners as possible.

Ed: Until the creation of the FHA back in the 1930s, banks would not make a long-term, fixed rate loan to anyone who sought to purchase a residential property (note, here, I try to resist the use of the word “home”). By agreeing to protect the lender from the risk of loss due to borrower defaults, the government increased the demand side of the equation but also (we certainly agree here) enabled landowners to close the widened window of affordability by raising land prices. The FHA program did nothing to protect banks from interest rate volatility, however. This would require the creation of a secondary market for mortgage loans. 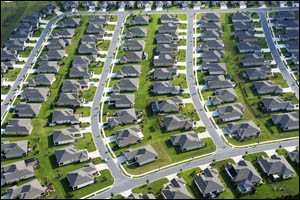 Lindy: By smoothing out the risk as they did with these mortgage- backed securities, the GSEs increased the demand for land. Isn’t it true that this put a double squeeze on the other 34% or so of US families that can’t afford to “buy” a home? It increased land rent outright, and reduced the supply of rental housing. It made the poor poorer.

Ed: I do not see the outcome as quite so clear. The demand for land came because after the Second World War the government provided veterans with funding for college educations (leading to higher incomes and higher aspirations to become property owners, independent of parents and the extended family living arrangements that existed prior to the war), with VA mortgage loans at low fixed rates and almost no down payments. Add the creation of the interstate highway system and the stage was set for the conversion of farmland to subdivisions. The housing stock in the cities had been deteriorating since the Depression began. The result was a new pattern of living: one family in single-family detached housing. The rate of homeownership increased quickly, then reached a plateau. Huge numbers of apartments were also constructed almost everywhere, some of which were built with various subsidies and made affordable to lower income individuals and households. Also, there is a percentage of people who live in apartments who have the financial ability to be an owner but choose to lease an apartment. Fannie Mae served the affordable rental housing market by purchasing low income tax credits.

Lindy: Nevertheless, I was suggesting that, given those historical facts, the availability of subsidized mortgages was, itself, a factor that increased the demand for land. And the fact that some people have reason to choose renting over buying doesn’t deny that our system favors home-buying over renting. In a broader sense, all of these trends got everyone thinking in terms of land ownership being the “American dream.” (They called it “homeownership,” but it meant landownership!) It made most voters into land speculators — and, as booming values became a supply of easy cash, this just became a warm, fuzzy, happy thing – for a while.

Ed: No argument there. But, I do not think there was a conscious set of policy decisions made to hide the real impact of land rent monopoly. As I have written elsewhere, land speculation has always been an integral part of the American System, hardwired into the American creed, part of the game. We know the havoc this created, but getting others to see the problem and then want to do something about it, well, you know all about that side of things.

Lindy: True enough! Yet I think we agree that eliminating land speculation through the Georgist remedy was, therefore, needed all along, and could have been successfully implemented at any point. Now, Fannie and Freddie found creative ways to game the system for the benefit of all the millions of minor land speculators out there. Does that make them “part of the problem”? I mean, hey, they were just playing the cards they were dealt; they weren’t actually evil. But I don’t think they brought us any closer to a just and prosperous society. The reverse, I’m afraid.

Ed: The game is rigged and has been. The top people at Fannie and Freddie never understood the full nature of the game. So, in one direction the programs we designed added fuel to the fire. And, then, we had to come up with ways to mitigate the damage done by rising land prices. I used to say that what I did every day was to join thousands of others putting our fingers in the dike to hold back the flood as best we could.

But, there is this: By 2003 I was able to convince the senior people in my division [at Fannie Mae] that LVT was the key to community revitalization and affordable housing. So, I put together a PowerPoint presentation explaining LVT and the company sent me on the road giving talks on the subject. I took Josh Vincent with me to Pittsburgh, in fact, where we spoke to a group of 20-25 civic leaders. None of them had any idea that Pittsburgh had had a two-rate property tax or what the implications were.