Here are all these people demonstrating on Wall Street — and now it seems to be spreading to Boston, Chicago and other cities. They call themselves ” 99%” who have been abused and exploited by the one per cent who have bankrupted the global economy. It’ been suggested that these protesters have ” in the game” because they owe tens of thousands on student loans and cannot find fulltime work. They’ had to move back in with their parents — that is, if their parents’ homes haven’ yet been foreclosed on.

The occupation of Wall Street has a live video feed and lots of online presence; it may be the first event in US history whose self-generated coverage overshadows that afforded it by the news media. Is this the ” Spring” come to America? The Wall Street occupiers have pledged not to leave until some major systemic change comes about. The exact shape of this change has not been specified — and that tempted many early observers to shrug the event off as a sort of fashionable hipster stunt. But these folks are talking about the horizontalism of what they’ trying to do. They aren’ making any demands of government, they say, because government can’ be trusted to even hear what they’ saying, much less respond in good faith. And if they aren’ talking to government, then who are they talking to? Why, who else could it be but their fellow citizens? 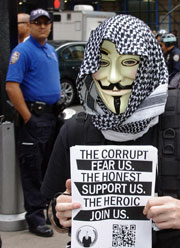 How are we Georgists to respond? Do we want to be in their number? These folks are talking about the very problems we seek to solve. Alas, most of them cannot coherently state the nature of the problem, much less figure out how to solve it. How frustrating! We can supply that — but how? If a bold Georgist gets up on a soapbox in Liberty Plaza and eloquently expounds Real Solutions, who will listen?

After I first read Progress and Poverty, I put a lot of effort into searching for its fatal flaw. Eventually I think I found it — though it didn’ dampen my enthusiasm for the cause. Here’ how the HGI puts it — as optimistically as possible — in the readings for its Applied Economics course:

Henry George believed that ” government in more than name can exist only where wealth is distributed with something like equality — where the great mass of citizens are personally free and independent, neither fettered by their poverty nor made subject by their wealth.” And yet he proposed to use that very democratic system to bring about the reform that would create such a state of society. This could, perhaps, be called an oxymoron — or, a dual challenge to George’ followers.

This would imply that as the rich get richer and the poor get poorer, democratic dysfunction gets worse — which certainly seems borne out by the follies we’ lately been watching in Washington. So what is to be done? We earnestly and ardently seek local legislative progress toward rent-for revenue. We seek to do a better job of educating more people about fundamental economics. We do these things, because we have to do something; the alternative is to stay as drunk as possible. Yet it may well be — and it seems more and more likely — that the just and prosperous economic order we envision will not come about unless, until, some major calamity totally derails the current system, just smashes it to bits.

That happened in the Soviet Union — and Georgists rushed in to offer a sane way of shaping a new order. It is generally held that their efforts failed. But we should not be so hard on our colleagues: their efforts came closer to succeeding than many realized, because they inspired an organized campaign to discredit them. If we are clear about the political landscape of the world we actually live in, we have to see that as one of the most heartening developments in the history of the Georgist movement.

We need to stay light on our feet and learn how to improvise. It’ very hard to tell what’ coming; we are under that ancient curse of ” in interesting times.” If you’ really lucky, you might get pepper-sprayed by the police — or lambasted in the Wall Street Journal.