The title is “in your face” — what does she mean, “The New Jim Crow”? We have an African-American President; Affirmative Action is well-entrenched in education and employment; people aren’t anywhere near as freaked out over mixed-race couples as they used to be. For crying out loud, the Civil Rights Act was forty-eight years ago! Surely we’ve long since moved past Jim Crow! Haven’t we? Michelle Alexander, a highly-credentialed civil rights lawyer — she has clerked for Justice Harry Blackmun, and directed the Civil Rights Clinic as an associate professor at Stanford Law School — once thought so, too. “Ten years ago,” she writes in the introduction, “I would have argued strenuously against the central claim made here — that something akin to a racial caste system currently exists in the United States.” 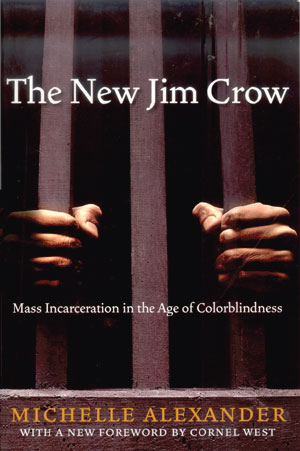 The case she makes is inescapable. What makes this book so valuable is the clear connection it makes between the War on Drugs and the mass incarceration it has engendered, and the mistaken idea that the United States has moved past its terrible obsession with race. Today’s prevailing cultural narrative sells the idea of a colorblind society. But if that is so, then how can we explain the overwhelming systemic bias in our criminal justice system? If, despite our decades of progress and good intentions, a racist ideology is still imposed on society, it indicates that the people of the United States still have not let go of it. For racism is an ideology. There is a vital difference between prejudice, which is a personal attitude, and racism, which is a political force seeking actuation in society. Michelle Alexander cites a great wealth of evidence that this political force is still potent today.

Every part of the “War on Drugs,” from pre-arrest police procedures to the appalling vacuum of resources or support afforded to ex-convicts, is administered in such a way as to disproportionately penalize Blacks and Latinos, particularly Black and Latino men, and most particularly Black men. No doubt this isn’t news to the many HGI students who are in prison — but it may shock some of our readers to find out just how widely this is known. Consider, for example, this report of a student from the University of Chicago, where a law professor arranges police “ride-alongs” for his students:

Each time we drove into a public housing project and stopped the car, every young black man in the area would almost reflexively place his hands up against the car and spread his legs to be searched. And the officers would search them. The officers would then get back in the car and stop at another project, and this would happen again. This repeated itself throughout the entire day. I couldn’t believe it. This was nothing like we learned in law school. But it just seemed so normal — for the police and for the young men.

Alexander identifies a historical pattern of drift, during which real racial progress seems to be happening — but it leads to a crackdown. After the abolition of slavery, voting and civil rights were established across the South, and a number of African-Americans were sent to the US Congress. This was followed by the Jim Crow legislation that created official segregation in every aspect of life. Poll taxes, literacy tests and other means were employed to deny voting rights. Similarly, the decade between the Brown v. Board of Education decision in 1954 and the Civil Rights Act ten years later marked the end of official racial discrimination. With discrimination in housing declared illegal, and affirmative action programs taking hold in education and employment, the US seemed, on the surface at least, truly to be moving toward becoming a “color-blind society.” Officially, and in the popular mind, that’s what the US is today. People are no longer discriminated against, imprisoned and denied opportunities because of their race. Only “criminals” deserve such treatment.

The “War on Drugs” is widely associated with the crack cocaine epidemic that began in the 1980s. The recession of the early 1980s, coupled with the removal of urban manufacturing industries, hit minority communities very hard, and undoubtedly this increased the temptation to get involved in selling drugs, including crack. It is telling, however — and not widely remembered — that the Reagan administration announced its “war” before the devastating effects of crack cocaine started appearing in the news.

The extraordinarily punitive character of the War on Drugs is clearly shown as Alexander compares it to the campaigns that have been waged against drunk driving. “Unlike the drug war, which was initiated by political elites long before ordinary people identified it as an area of extraordinary concern,” the movement to crack down on drunk driving was a grassroots movement led by mothers of its victims. At the end of the 1980s, drunk drivers were responsible for some 22,000 deaths annually, and overall alchohol-related deaths were estimated at about 100,000 a year. At the same time, “the total of all drug-related deaths due to AIDS, drug overdose or violence of violence associated with the illegal drug trade was estimated at 21,000 annually.” However, drunk drivers, who are mostly white and male, are usually charged with misdemeanors, and sentenced to fines or community service. People charged with drug offenses are most often convicted of felonies, sent to prison, and forced to bear the burden of a felony conviction for the rest of their lives.

A convict freed from prison in the United States today has a very, very tough way to go. Some are lucky enough to have supportive families and friends; many do not. Voting is no longer a possibility in all but a handful of states. And in a time of high unemployment, the dreaded “box” — in which a job applicant must indicate his/her status as a convicted felon — is an almost insurmountable barrier to successful employment. Police surveillance is a fact of life; even public housing is unavailable to convicted felons. Alexander writes, “Criminals, it turns out, are the only social group in America we have permission to hate. In ‘colorblind’ America, criminals are the new whipping boys. They are entitled to no respect and little moral concern.”

Some readers may wonder at the emphasis this book places on race. Perhaps they’ll admit that the “War on Drugs” is a bad policy that has forced too many people into prison. But drug crime correlates with urban poverty, which correlates with race — how does this prove a deliberate racist policy? It might be instructive to recall that racism was indeed part of the Law of the Land, in the original US Constitution, in the Dred Scott decision and the Jim Crow laws. However, these racist laws were bitterly controversial in each case. They were not codified in law because they conformed to anyone’s rational model for the Rule of Law, but rather because there was a social movement demanding that they be on the Books. In time, the legal process removed specifically racist laws — yet the social movement remained. Michelle Alexander’s thorough compilation of evidence shows beyond doubt that the “War on Drugs” blatantly and overwhelmingly discriminates against people of color. This suggests that the racist movement still holds power in US society, using the seemingly “blind” processes of crime and punishment as its instrument. This unfortunate fact shouldn’t be avoided by those who claim to work for social justice.