There are only two ways in this world to gather wealth: make it or take it. All economic policy debate concerns allocations based on these two “sources.” Taxes are hated because they are a take, leaving less for the guy who worked at making. Mostly the argument over taxation focuses on how much to take and what to spend it on. But, just what constitutes a “take?” Georgists are the stubborn outsiders of economic theory who refuse to wink at all the taking that pretends to be making. They look directly at the question and draw unsavory conclusions about how great fortunes are accumulated. The emperor funds the leading economic departments, and Georgists are shown the door for their sartorial observations of naked aggression. 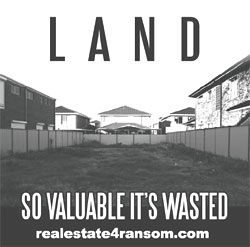 The most famous of Murray Rothbard’s many denunciations of collecting land rent for public revenue was that by taxing away land’s market value, the tax would destroy its own base. Rothbard was confusing selling price, which depends on the owner’s ability to collect rent in the future and would hence would be destroyed if the full rent went to the community, and rental value, which would remain, and constitute the tax base. — L. D.

But, if one wishes to present an image of intellectual and academic honesty, one can’t always ignore the opposition. “Critiques” must be offered. Overwhelmingly, the critiques are straw men — Murray Rothbard’s is a famous example. This can be surprisingly effective because readers, already inclined to agree, will believe the critique provides sufficient “investigation” into Georgist theory. I have never met a mind closed to George that has not been preempted by one of these straw men. None of these “critics” has ever accurately described Georgist principles. Rent is the species of income that comes without any production, without any “make” — and these straw-man critiques nearly always try to deny that there is any “take.” Instead there is this magical thinking about rent: obviously it’s not from “make,” but critics of Georgism vehemently deny that it involves any “taking.”

One of the more prevalent straw men is the so-called labor theory of value, which is a phrase Henry George never used. Modern Georgists don’t need to deny the subjectivity of value. But consideration of value shows it comes from exclusion. Where there is not exclusion there is no value. When we make a choice we take one opportunity and exclude the other. When we buy a cake, we part with the cash. When we eat the cake we exclude “having” it.

These two are the “welcome” or rather “acceptable” forms of exclusion; we think the workings of the universe enforce them. If one could eat the cake and still have it, cake would have no value. Likewise, air is important to us, but only if its access may be restricted or impaired does it acquire value. Come some rationale for private ownership, such as “all commons are a tragedy,” then suddenly we would all be ready to cough up some coin for our next breath. If we had previously bought into that rationale, and had never known “free air,” we would accept the airlord’s right to take his due. We would pay for every breath for our entire life and think it right and honorable.

We all know the questions that some deists started asking about god and king: What makes him so special? “Our equality is self-evident!” In time it started to dawn on us that the king’s authority was a bit overstated — that the people themselves are the only legitimate source of such authority. At last we could all pursue our happiness without any unwelcome taking. Well, almost. Alas, to secure a strong enough coalition to stand viably as a new nation, the “enlightened” republic was forced to define slaves as property.

The semantic of “property” which included men as chattel has since been improved — another so-called “make” was moved to the “take” column. But there are other ways to make “property” synonymous with “taking from those who make,” and of course any that remain would be thought honorable and right.

Georgists assert that a man can only be said to own himself if he can control what he has made and have his share of access to the nature that is needed to make things. All production is the taking of nature and changing its form. All life is production. So, independent self-ownership depends on equal access to nature. If some people can exercise exclusive access to natural resources, then all the rest are their slaves. And though non-owners can buy or rent access to natural resources, that changes nothing — a slave who can buy his freedom is still a slave.

The Georgist concept of property does not conflate “make” with “take” — that conflation which leads to the creation of that super class of “some people” who profit by natural exclusion, who create think tanks, and who don’t like having their privilege laid bare by independent and amateur economists.

The more scarce resources become, the more wealth they will be able to take. It was once the norm (in the USA) for one wage earner to be sufficient for a family; now, two (barely) are. What happens when it takes three, five, seven workers to feed a family? (It already does, in mal-libertarian test cases like Haiti, Cameroon, Bangladesh…) A real free-market would have no “take.” Georgists are the only standing defenders of a truly free market. A better name for what people miscall the “free market” today would be “kleptomarket.”

The left buys into the conflation too. Without understanding privilege, they blame the free market for the sins of the kleptomarket. When they propose the wild policy of letting people have the freedom to keep what they make and own their destiny, the left lumps Georgists in with the robber barons. The focus of the left is on intervention and political meddling. They see the problems as market-caused instead of privilege-caused — and therefore their only option is to reduce freedom even more.

There is no honest critique of Georgism from right or left. They both fail to acknowledge the presence/function/importance of rent, the huge, constant, systemic redistribution coming from the force of resource exclusion. The growing wealth gap is proof enough that the redistribution, the take, is gigantic. If objects fall, there is gravity — even if one can’t see or formulate it.

Finally, between hard right and hard left, there are the long-suffering middle-of-the-roaders, who may even acknowledge that treating the symptoms may not cure the disease, but at least it’s better than nothing. But is it? How has moderation worked so far? Without King John, there would be no Robin Hood. The left never exists without property privilege. The status quo of endless conflict and competition between the two is very profitable to the insiders on both sides. For this reason alone Georgists will never be invited to the party. In games of political maneuvering, it’s too easy to gain currency by agreeing to black ball outsiders. The critical ingredient to change that is courage.