At the recent CGO conference, I was to participate in a debate with advocates of a “Property Tax Independence Act” (PTIA). This proposed constitutional amendment in Pennsylvania has also been dubbed “House Bill 1776.” As it turned out, none of the PTIA advocates showed up — but here are a few of the things I wanted to tell them.

Moves to eliminate the property tax have been common in recent decades in Pennsylvania and elsewhere. Some “tax relief” bills and constitutional amendments have been passed, with results ranging from mixed to disastrous. Although California’s Proposition 13 still has passionate defenders, their tone has become increasingly desperate.

UrbanTools has always researched and helped implement programs that reduce the pressures of taxation on all strata of society, from poor to prosperous. We believe that a functioning market system augmented by a stable public revenue system is the best option for government, particularly state and local governments, as federal aid dries up.

Pennsylvania is indeed a relatively high-tax state: the nonpartisan Tax Foundation has consistently placed Pennsylvania in the top ten in state and local tax burden. However, although it’s popular to blame this on the property tax, the claim does not stand up to scrutiny. Using Tax Foundation figures, the property tax provides 29.9% of state and local revenue. That places Pennsylvania right in the middle of the pack: #22, significantly below the national median of 32.4%.

One of the less-discussed facts about property taxes is that they are local. People can vote to raise or lower them. This April, the town of Medford, NJ voted a higher local levy above the set tax cap. A Pennsylvania state legislator or County Commissioner from an area close to a state border like Maryland’s is seeing growth from inflow, and greatly increased spending, contrary to decades of tradition. We shouldn’t be surprised. Yet, most Pennsylvanians live in rural areas with one big town usually serving as the county seat. It might surprise a citizen of, say, Blair County that their property tax burden is in the bottom third of the nation’s counties. Yes, in Blair, Elk, Cameron and many other counties in Pennsylvania, the property tax is a bargain

Eliminating the property tax would launch these affordable places into uncertainty. Pennsylvania’s unwieldy state equalization system desperately needs reforming. And, the state’s overall tax system has much to do with its lack of competitiveness. The Pennsylvania income tax is flat and wage-based, burdening even the poorest Pennsylvanians. There is also a local earned income tax — again a wage tax, paid in addition to the state levy. 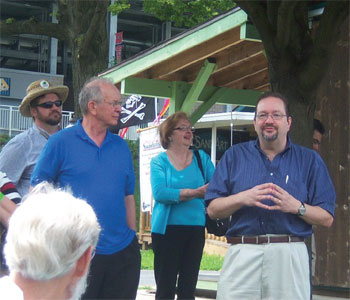 The author tourguides on Harrisburg’s City Island, in front of its snazzy new, municipally-owned stadium.

Are property taxes driving people out of the state, as PTIA advocates claim? There are a lot of reasons why people are leaving Pennsylvania, but it’s unlikely that property taxes are one of them. It is true that New Jersey has high property taxes, which contribute, along with very high income, sales, and corporate taxes, to real distress. However, when one looks nationally at states that rely on one tax more than others, clear differences appear. Several states that dodged the Great Recession — Texas, New Hampshire, Nebraska — have relatively high property taxes coupled with minimal to no income tax. States that have been historically poor, such as New Mexico, Louisiana, and Mississippi, have relied to a far greater degree on sales taxes. Such states have lousy schools, lousy health and are not great places to live.

Despite all these facts, PTIA advocates blame the property tax for Pennsylvania’s troubles, ignoring other far more harmful taxes. The solution it offers is increased sales taxes and increased income taxes! The PTIA bill would have to raise about $24 billion a year to replace the school property tax — and Pennsylvania’s sales tax rate is already 6%. The sales tax couldn’t raise all the needed revenue without becoming absurdly burdensome, so the state income tax would have to rise as well — up to the high levels of states like Connecticut, California and Ohio.

The sponsors of HB 1776 pointed to one state that was considering eliminating its property tax: North Dakota, one of the most sparsely populated states in the USA. Some were tempted by this idea because the state’s coffers are currently swollen with revenues from gas, oil and other resources, but that won’t last forever. Fortunately for them, 76% of North Dakota voters just rejected the abolition of property tax. Still, perhaps the USA would have gained an overall benefit, had North Dakota made this mistake. In our federal system, the states are indeed the laboratories of future policy.

True, the property tax, as constructed, is a lousy tax. It falls disproportionately on what people do with their own dimes and their own time. The property tax is actually two taxes: a tax on land values and a tax on building values. The original meaning of “Commonwealth” envisioned a place where people can make a living, succeed, be happy, and be legally secure in what you they have earned. One part of the property tax, the tax on buildings, is indeed corrosive to prosperity and freedom. As we all know, when you fix up a house, or build one from scratch, your tax liability increases significantly. The tax on land values is the only tax that collects what a community creates.

That’s why Pennsylvania has the Keystone opportunity zone, which is a confused, privileged and preferential way to get out from under a bad tax system. We’d suggest that instead of trading one bad tax for a basket of bad taxes, Pennsylvania should expand on its use of the land value tax, to encourage freedom and prosperity — as do Australia, Singapore and Hong Kong. The land value tax is already used in 20 cities and school districts in the state of Pennsylvania. In some cities annual property taxes have been reduced for some homeowners by up to 80%, without resorting to other taxes! Instead, revenue is provided by land value, an immobile source of revenue which is created by local effort, services and community.