There’s been a great deal of excited conversation recently, off-line and on, about social media. Young Georgists (imagine! Young Georgists!) are pointing to tremendous opportunities, and I don’t doubt that they’re right. 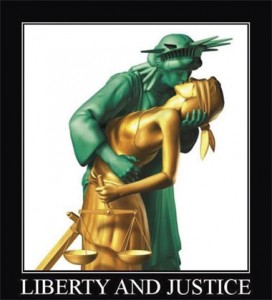 Yet, as this is still a print publication, aiming for a longer time-horizon than one finds on Facebook, a few comments might be worth making.

I confess to a certain wistfulness. Seems just yesterday when I was one of the youngsters urging us to geonomize the Internet. The HGI’s Web presence was once fresh & hip. (Are things fresh, or hip, anymore? What means that now?) Now the site seems dowdy: “Well, it looks like it’s been there for a while… I guess that’s good.” I am reminded of a set of rules coined by Douglas Adams: “Anything that was in the world when you were born is normal and natural. Anything invented between when you were 15 and 35 is new and revolutionary and exciting, and you’ll probably get a career in it. Anything invented after you’re 35 is against the natural order of things.” I see what he meant; there seems something fundamentally demonic to me about Twitter, for example, but I may be overreacting.

There is no denying that social media is bringing new, valuable people into the Georgist orbit, creating expanding ripples in the information sea. But when we oldtimers check in, and we hear these youngsters newly-rehashing points that were comprehensively rehashed decades ago, we wonder where the “there” is. Fogeys like me, accustomed to the languid pace of email and the Web, have trouble pacing the new marketplace of ideas. I was discussing presenting my online “Mannahatta” seminar in video form. One of the young guys asked how long a video I was thinking of; I replied, oh, maybe as long as 30 minutes. “Thirty minutes!?” He nearly fell over. He suggested reducing the length by a factor of ten.

Those of us who crave dialogue, who seek validation via old-school stuff like journal articles, are bound to be frustrated. Social media isn’t about that. It’s about Buzz! Linking! Making contacts! Connecting! Are these not just the things that Georgists have desperately needed to do for the last, oh, forty years!?

Jacob Shwartz-Lucas and his merry band of Facebooksters have been creating and sharing piles of geoist pix; two examples are shown here, and a few more have been sprinkled through the pages of this issue. It costs exactly one mouse-click worth of effort to show such a picture to every person on one’s Friends list. That’s a heck of a lot easier than standing on a streetcorner handing out fliers. The effect is incremental, aggravatingly unquantifiable, and undeniably untrivial. Hey! We’re economists. We’ve heard of network externalities. The more people do these good things, the better these good things are to be doing. 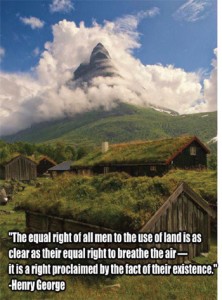 I believe I have enough familiarity with the minds of both Onliners and Georgists to make one recommendation. Both groups are unherdable gangs of cats. They might all up and decide to go somewhere (Flash Mob!) but they’re not going to do that because some Mature Adult told them to. However, the people who control movement funds tend to see themselves as Mature Adults, so there’s a potential problem. People, especially creative young people who are fizzing over with groovy ideas (What about groovy? Are things groovy anymore?) need to keep body and soul together, and may ask for funding. I’m not saying they shouldn’t get it, but I am saying that they shouldn’t have to be told by Mature Adults what they must do in order to get it. I suggest that our movement’s Mature Adults identify, if they can, a cohort of creative-young-people-full-of-mos- def-ideas, and pay a living wage to as many of them as is feasible — just for doing what they most want to do, which is to proclaim from the world’s technological rooftops the good news about how to create a just and prosperous economic order for everyone.