Murphy’s Law was in effect at this year’s CGO conference. One hotel, with which we’d had a contract, went out of business on us. Three city council members of Pennsylvania LVT towns indicated their intentions to join us on two key panels, but didn’t. Our tour bus driver inadvertently drove us way around the wrong way before a (very brief) visit to the Milton Hershey Museum. Dan Sullivan and Josh Vincent were primed to debate advocates of abolishing the property tax in Pennsylvania; they also failed to show.

Of course, these little curves that fate threw our way paled in comparison with those Harrisburg, Pennsylvania has weathered. The state capital city was already distressed by the early 1970s, due to deindustrialization and population loss. In 1972 it was hit with a devastating flood in the wake of Hurricane Agnes. The Susquehanna River is prone to periodic flooding, anyway — but the Agnes flood was a doozy, leaving widespread damage. Things went from bad to worse, and by 1982, Harrisburg was listed as the second most distressed city in the US. But, then, it began slowly but surely to climb out of depression. 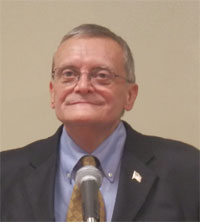 Using two-rate LVT policy, along with development-friendly initiatives championed by Mayor Stephen Reed, Harrisburg’s economy improved dramatically. In a decade’s time, the number of businesses on its tax rolls increased from 1,908 to 5,976, and taxable real estate values increased by 754%.

Then, in 2004, Harrisburg floated a bond, and secured a contractor to expand its trash-to-electricity facility, which had been in operation since 1972. Everything that could have gone wrong with this endeavor, did — the contractor had no experience with this large a project, and the city failed to secure a performance bond on it. Cost overruns and environmental concerns mounted. The initial plan was for the project to be a net revenue-raiser for the city by now; instead, it has landed Harrisburg some $320 million in debt and flirting with bankruptcy. The debacle led to Mayor Reed’s defeat in the 2009 Mayoral race (he had been the longest-serving mayor in Pennsylvania history). Ironically, bankruptcy has also been on the table when Reed took office in 1982. He rejected it — as did his successor, Mayor Linda Thompson, this year. 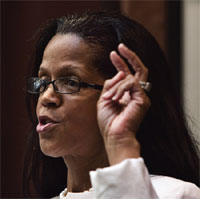 Both of the Mayors addressed our conference, and both affirmed their strong support for LVT. Mayor Thompson, at the opening reception, gave a feisty, fact-loaded speech accentuating her hands-on approach to restoring faith in Harrisburg’s power to solve its problems from the ground up. Mayor Reed delivered a stirring keynote address in which he placed rent-as-revenue policy squarely in the center of an encompassing vision of societal revitalization, with cities leading the way.

Both of the Mayors, as well as State Senator and gubernatorial candidate Jack Wagner, demonstrated that decades of LVT advocacy in Pennsylvania has indeed borne fruit. It was heartening to hear prominent invited speakers actually endorse our proposals — and even congratulate us for making them! 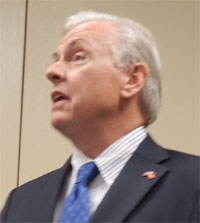 The theme of this year’s conference was “An Effective Role for Every Georgist.” The program included demonstrations of skills and techniques, and discussions of strategic planning. In a worthy, if not so well-attended, pre-conference education program, Mike Curtis proved that he’s gone as far as anyone ever has toward making the “Cause and Law of Interest” not just comprehensible, but actually engaging. Also, yours truly discussed the HGI’s process of discovery and thought toward developing a revised set of economic definitions for Principles of Political Economy. The regular conference program also featured three well-received education sessions: Alanna Hartzok showcased the Earthrights Institute’s online course, Land Rights and Land Value Capture; Lindy Davies demonstrated the HGI’s Mannahatta seminar, which uses the map and history of Manhattan Island to show the laws of wealth distribution; Mike Curtis offered a thought-provoking seminar on exactly how the property tax on buildings decreases the marginal incentive to build taller, more compact structures.

In another extremely valuable education-oriented session, Jacob Shwartz-Lucas discussed how using fresh visuals, in the forms of short videos, photo/cartoons and infographics, can yield very substantial outreach benefits. Ed Miller built on Jacob’s presentation by detailing some of the ways in which we can make effective use of today’s Internet, and Erich Jacoby-Hawkins focused on one important way of doing so: using the public-editable features of Wikipedia to set the record straight and make sure the relevant facts about Land Value Taxation and Georgist history are not overlooked.

After Mayor Reed’s inspiring banquet speech, two special awards were given. The Economic Justice Advocate award was presented to Gil Herman, who regretted being unable to attend, but heard his ovation, and thanked his colleagues, by phone. And, a special “by permission of Henry George” stogy certificate was presented to Bill Batt. All that was left, then, was for a bunch of weary, inspired colleagues to repair to Sue and Scott Walton’s hospitality suite for one last round of good conversation.