Free Trade Doesn’t Work: What Should Replace It and Why by Ian Fletcher, 2011, Coalition for a Prosperous America. Review by Lindy Davies

Imagine! More controversy about free trade. The same old arguments spin around and around. For Georgists, though — at least since 1890, when Henry George’s Protection or Free Trade was read in its entirety into the US Congressional Record — are there really any new insights to consider?

“You bet there are!” exclaims author, HuffPost blogger and think-tankist Ian Fletcher. He warns that free trade policies are pushing the United States into industrial decline. No fewer than 32 emphatic blurbs from across the political spectrum introduce this book as an essential 21st-century read. For Fletcher, free trade is a hidebound theoretical dogma, thoughtlessly promoted as truth, whose prosperity-sucking tentacles are destroying society before our eyes!

Georgist Journal readers might be tempted to wonder why we should care about this book — if, as seems likely, it is just one more protectionist screed. True, its author currently cuts a more dashing figure in the rounds of punditry than any Georgist. But should we care? Having read Fletcher’s annoying book, I’m forced, reluctantly, to admit that we should. Free Trade Doesn’t Work raises some real issues that Georgists ought to consider, if they wish to avoid being labeled archaic and quaint. 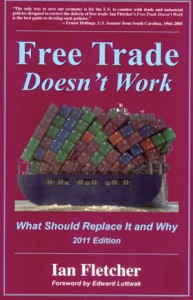 Its 268 pages of main text refer to a whopping 885 endnotes; many of them simply direct the reader to where the current point has been stated elsewhere with even greater élan.

This book probably isn’t the most advantageous place to get the needed updates, though. For Fletcher, free trade is an uneconomic ideology that has crippled the American economy, and its effects will only get worse. He tells us that the United States was founded on protectionism; our emergence as a global superpower depended on the support we gave our infant industries; only our blind allegiance to pro-market Cold War rhetoric made free trade seem attractive, and just look how things have turned out!

Curiously, Fletcher never spells out what he means by “free trade.” One might be excused for this, given the term’s many connotations — but, then again, it is the topic of his book. In the opening chapters he writes as though the reader clearly knows what free trade is: the ruinous policy that the US has been pursuing. But what is it, exactly? Is it eliminating import duties? Removing safety and environmental regulations? If the US has a free trade policy, why does it have some 400 pages of tariff rules? Fletcher even goes so far as to say, in his chapter on the utter falsity of the theory of comparative advantage, that “fairly open trade, most of the time, is a good thing.” But gosh, isn’t that a fairly accurate description of US policy — the very “free trade” policy Fletcher excoriates?

Henry George ultimately defined free trade quite idiosyncratically — in an inclusive, radical way, envisioning a state of society of which the removal of import duties is only a small part of the solution:
“Free trade means free production. Now fully to free production it is necessary not only to remove all taxes on production, but also to remove all other restrictions on production. True free trade, in short, requires that the active factor of production, Labor, shall have free access to the passive factor of production, Land. To secure this all monopoly of land must be broken up, and the equal right of all to the use of the natural elements must be secured by the treatment of the land as the common property in usufruct of the whole people.”

It turns out that many economists have agreed, for some time now, that some public encouragement of key industries is less than fully daft. Paul Krugman won the Nobel prize in 2008 for his work in this area, on New Trade Theory (and he wrote that many of the key ideas in his work had been developed by Swedish economist Bertil Ohlin in the 1930s). The basic notion is that certain capital-intensive industries offer increasing returns to scale, once they reach a certain threshold of output. It therefore yields benefits to support such an industry before its output reaches that threshold. This becomes particularly true in a modern economy in which capital is highly mobile — because once productivity gains have been in achieved in a relatively high-wage, developed economy, they can readily be transferred to lower-cost facilities in other countries.

Even Henry George, staunch free trader that he was, hinted that this could be the case:

As an abstract proposition it is not, I think, to be denied that there may be industries to which temporary encouragement might profitably be extended. Industries capable, in their development, of much public benefit have often to struggle under great disadvantages in their beginnings, and their development might sometimes be beneficially hastened by judicious encouragement. (Protection or Free Trade, chp. 26)

George was not sanguine, however, that government would be competent to choose which industries should receive encouragement. And, he clearly explained why tariffs are the most unfair and inefficient means of providing such help. George really believed that the market should do the encouraging — but if public support were to be given, it should take the form of bounties (a.k.a. subsidies).

One other reform that would help, Fletcher says, would help would be a value-added tax. All the major developed nations employ a VAT. Since the US doesn’t, he notes, this amounts to a tariff on US exports and a subsidy on imports (because their wholesale and retail sales weren’t subject to the importing coutry’s VAT).

Ian Fletcher shares Henry George’s doubt that the political process can be relied upon to choose which industries to protect. His favorite solution is to avoid playing favorites by implementing a “natural strategic tariff” of 30% on all imports! Raising the price of imported goods (and their home-made competitors) by 30%, he reasons, will rebuild US manufacturing industries and reduce unemployment. He does admit that this solution would probably not work for weaker economies than the US’s, and that “if we do not cultivate the existing strengths of our economy, a natural strategic tariff will not do us much good.”

Fletcher’s recommendation seems extreme. Yet, we must admit that the old-school Ricardian position of never, ever offering any encouragement to domestic industry may go too far in the opposite direction. How are we to sort this out?

I think it would be helpful at this point to recall Henry George’s points on “the real weakness of free trade” and “the real strength of protection.” For George, the tariff issue is just one part of a much larger economic reality. The traditional Ricardian/Georgean view boils down to:

Modified to the Fletcherian/Georgean view, it becomes:

Putting the matter this way, I think we can suggest alternative methods for encouraging those strategic industries. Let’s admit that certain key domestic industries need encouragement. I think the reader will admit that an industry can be encouraged just as effectively by lowering its production costs as by increasing the retail price of its products. So, how about this for an industrial policy: We could remove all taxes levied on an industry’s products, at every stage in the production process, and simultaneously eliminate taxes on the wages of all the workers in that industry. And, we could use land value taxation to eliminate land speculation. This would ensure access to the nation’s best locations, those places most suited to carrying on that particular industry, and at no higher cost than before.

However, I agree with Ian Fletcher that we probably ought not trust government with the responsibility of choosing which industries should receive such powerful support. We should probably just apply it across the board.