The 28th conference of the International Union for Land Value Taxation and Free Trade was held in Buenos Aires, May 15th to 18th. The conference theme was “Housing, Land and Social Inclusion: A Taxation System to Achieve it.” Thanks to Héctor Sandler for making this conference possible by introducing three organizations based in the City of Buenos Aires as joint hosts with The IU. Prof. Sandler also arranged for the Faculty of Law, Buenos Aires University to provide the conference venue. The conference was cosponsored by the Argentine Association of Budget and Public Financial Administration (ASAP) and the Institute of Economic Training (ICE), Héctor Sandler’s organization. ASAP is the Argentine affiliate of the International Association of Public Budgeting (ASIP), which also collaborated in the conference’s planning. 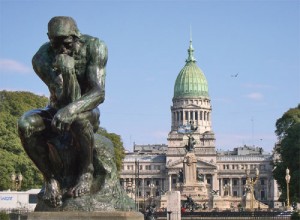 This conference was a very well-deserved tribute to Professor Sandler, Argentina’s venerable and charimatic Geogist, who has spent decades bringing our philosophy to his countrymen. Héctor was responsible for arranging the program, and he chaired many of the panels. Though well into his 80s, he was unfailingly clear and persuasive. His younger brother Guillermo, son Ernesto, and granddaughters, Georgists all, were recruited for presentations in what was at times a family affair.

Guillermo Sandler, Héctor’s brother, an economist in his own right, directs the Program for the Study of Economics of the Public Sector in Argentina. Granddaughters Natalia Arbelo and Patricia Abelenda offered compelling graphical presentations that demonstrated how much empirical data exists in support of Georgist claims. Their land value maps and economic rent estimates were all supported by solid numbers. This was a highlight of the conference, I thought, and deserves a much broader presentation. (For examples, see ESRI.com: “City of Cordoba, Argentina, Modernizes its Land Registry Administration;” and http://mapa.buenosaires.gob.ar/)

Ernesto Sandler’s other obligations meant his paper was read for him. But the IU is now considering how, with others, his book, Toward an Economy Without Barriers, might be published in English, and the summary we were privileged to receive suggests that it is well warranted.

A thought-provoking set of introductory materials made it clear that Argentina once had a very strong Georgist movement, and in fact was able to enact a national land value tax for a short time. It failed to take hold, however, due to changes in government administrations and lack of popular understanding — proving that education and public support are essential to the policy’s success. Guillermo Andreau, by early training an agricultural engineer but whose current focus is the right of access to land, spoke about the deprivations resulting from that denial. His explanation for the corruption of economic, moral, and policy sciences in Argentina’s history echoed much of what we know from Mason Gaffney’s account in The Corruption of Economics.

Three presentations explored contemporary challenges in China. Roger Sandilands, an economist at University of Strathclyde, presented a paper on “Housing Policies and Urban Land Values in China: Lessons from Latin America and Singapore.” A later session allowed Fernando Scornik Gerstein and Dave Wetzel to contrast their predictions for China’s future. Fernando saw the policy of leasing land for new developments as a hopeful sign. Dave Wetzel was less optimistic, noting that China’s leasing policy fails to collect the economic rent on all sites, and fails to capture land value increases during the period of the lease. For example, when one new subway railway was built, no plans were made for local government to capture the land gains over the 70-year life of the lease.

Quisia Gonzales talked about the treatment of minorities in Honduras, about which she was able to speak firsthand. Wendy Rockwell, who has made Costa Rica her home for years, gave a PowerPoint presentation based on graphics collected from many sources illustrating the merits of land value taxation. Peter Meakin’s paper on South Africa argued that the nation’s constitution mandates that land value taxes should be employed. He has been contemplating a lawsuit to challenge this contradiction. Frank Peddle contributed a densely philosophical paper on land rights from an international perspective; the paper, which deserves a close reading, will be online shortly. Fred Harrison explored the looming prospect of world conflict, based on the specter of increased debt, depression, and growing contradictions of capitalism. This thesis will be spelled out more fully in his next book.

Two of the Argentine presenters were American-trained economists. Professor Raul Cuello studied years ago at Columbia with Georgists Carl Shoup, Lowell Harriss, and Bill Vickrey. His paper, titled “Economic Thinking and the Tax Structure,” traced lots of early economics, emphasizing the importance of William Petty, a British economist, scientist and philosopher in the time of Cromwell. Petty’s ideas were influenced by Thomas Hobbes and Francis Bacon, anticipating Adam Smith by half a century.

Claudio Lutzky, who received his graduate education at George Mason University, spoke on climate change solutions, particularly a carbon tax. His paper would also be presented a month later at the Rio conference on Sustainable Development. Later, I took the opportunity to refer him to Peter Barnes’ book, Who Owns the Sky (1991). Prof. Lutzky was much intrigued by Barnes’s elegant proposal to auction rent of the air-pollution sink for what revenue it can provide.

of proximate land sites. He presented two case studies. The first examined the redevelopment of London’s East End Canary Wharf area, where vacant and derelict sites were transformed into high-rise employment centers. The second was the redevelopment of the Jubilee Line, which has increased values by £13 billion while the line itself only cost £3.5 billion to rebuild. Dave showed that all capital investments in a locale, not just transportation, generate increased site values that should be returned to the public, whose investments created them. The slides in his presentation contrasted the wasted opportunities in some areas with the prosperity generated in others.

Like all conferences, this one offered lessons for the future: publicity could have improved the sporadic attendance, and a registration list of those present, distributed to all, would have allowed better networking. Name tags, with affiliations, and written in large letters, would also have helped. Unfortunately, security against pickpockets and theft was inadequate. Despite the prestige of the National Law School where all our meetings were held, some of us lost valuable items in purses, knapsacks and briefcases. There might have been greater opportunity to see a bit more of Buenos Aires than what time was budgeted. The city of 15 million offered far more opportunities for visitors than we had time to see.

The cost of this conference was surprisinly managable. There was no registration fee, so with airfare, hotel and all the other incidentals, my total cost was about US $1,500. All and all, it was an event well worth attending — so, don’t cry for Argentina!