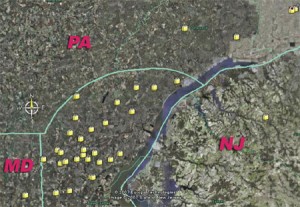 Here is a Google Maps image, showing shopping malls in Northern Delaware and its neighbors.

Some of the most depressed communities in Pennsylvania are sandwiched between Philadelphia and sales-tax-free Delaware. Even people who live in the border city of Chester, Pennsylvania, drive into Delaware to spend their money rather than spend it in their home town. This has left Chester with no quality retail center at all. Chester also has almost no new construction, other than what is subsidized by redevelopment agencies. What it does have is abject poverty: 42% of Chester’s residents had incomes below the poverty level in 2009, compared to 16.4% statewide. It also has about eight times as many murders, twice as many rapes and over three times as many robberies per 100,000 people as the national average. Chester does have about 15% less ordinary theft than the national average, but this isn’t really good news. Ordinary theft is mostly theft from stores; having very few stores means there can be little store-theft. (source: www.city-data.com)

Even the King-of-Prussia merchants, located northwest of Philadelphia in what was once the busiest shopping area in the country, lose the patronage of Philadelphians who prefer to drive a bit farther to shop tax-free in Delaware.

Commerce moving from southeastern Pennsylvania to Delaware has created a situation where there is fierce competition within Delaware and very little competition near Delaware. The tax discount of 6-7% is therefore magnified into a much greater differential overall. Even chain stores that have the same pre-tax prices on either side of the border will hire more people and provide better services where competition drives them to do so. This snowballs on itself, and Pennsylvanians shop in Delaware, not only for the tax savings, but because the overall shopping experience is better.

It’s Not Just Delaware…
— There is a massive flight of both businesses and residents from northern Massachusetts, which curtailed its property tax rates and now relies heavily on sales and income taxes, to New Hampshire, which relies almost entirely on local real estate taxes.
— According to the New York Times, shoppers routinely travel from New York City, where the sales tax is 9.25%, even on clothing, to New Jersey, where the
rate is 7% and clothing is tax-exempt.
— Many West Virginians even do their grocery shopping across state borders to avoid that state’s 6% sales tax on food. 54% of their population lives in counties that border other states, and none of those
other states tax food, according to an article by The Tax Foundation.

Proposals to increase sales taxes will increase the tendency to shop out-of-state. The effects are not linear, but compound upon themselves. That is, the added tax-avoidance incentives created by a increasing a sales tax differential from 0% to 1% are not nearly as great as created by raising the differential from 7% to 8%. This is because there is a threshold beyond which people will take steps to avoid the tax. The higher the tax differential, the greater the number of customers who will fall under the threshold, and the more stores in no-tax states will compete to attract those customers. It is not just a matter of traveling to make a purchase, but also of holding off on purchases in order to buy more goods at once in a no-tax market.

Sales taxes, like income taxes, also contribute to unproductive non-purchase alternatives. The “tax wedge” between what a product costs and what a worker takes home discourages purchase. As a result, the skilled mechanic moves his own furniture and the skilled furniture mover fixes his own car because both are discouraged by sales and income taxes from enjoying the benefits of cooperation. 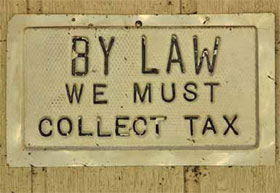 The only tax that does not create a “tax wedge” is the real estate tax. Although the building portion of the tax does discourage production somewhat, it is more than offset by the encouraging effects of the portion falling on land values.

While all taxes discourage new businesses, sales tax is the worst in terms of discouraging startup and marginal businesses trying to compete with established, successful businesses. A new business does not pay income taxes until it turns a profit, which usually takes from three to seven years, but it bears the full brunt of sales taxes immediately.

Replacing real estate taxes with sales taxes disproportionately benefits the most established and well-endowed businesses, which enjoy the most expensive locations. While neighborhood merchants are usually located on ordinary streets with modest real estate values, chain stores tend to be located at the convergence of major highways where land values are exceptional. If chain stores blessed with exceptional access to taxpayer-funded highways are to pay the same taxes as small merchants struggling in marginal locations, those small merchants are going to be in trouble.

It has long been known that all taxes come out of land values. John Locke noted back in 1691 that;

It is in vain in a Country whose great Fund is Land, to hope to lay the publick charge of the Government on any thing else; there at last it will terminate. The Merchant (do what you can) will not bear it, the Labourer cannot, and therefore the Landholder must: And whether he were best do it, by laying it directly, where it will at last settle, or by letting it come to him by the sinking of his Rents, which when they are once fallen every one knows are not easily raised again, let him consider.

Thus we see that real estate values are very high in Delaware, not only in the retail areas, but in the surrounding communities, as people prefer to live where there is convenient access to quality retail stores and services. As a result, Delaware communities get higher real estate tax revenues from lower real estate tax rates. What sales-tax states gain in sales-tax revenues, their property owners lose in land values. This either reduces property tax revenues or forces up rates. Who can deny that Chester and other Pennsylvania communities near the Delaware border have lost value as they lost commerce?

The claim that a national sales tax will not have such deleterious effects, and will end the tax evasion and snooping involved in income taxes, ignores the effects of sales taxes on smuggling and black markets. A proposal to invoke a national sales tax of 23% (which is really about 30% on top of the original asking price)

*The national “Fair Tax” proposal called for applying the tax rate to the item’s price with the tax already applied, effectively placing a tax on the tax.

would not replace federal income taxes as claimed, even if they taxed everything. The figures used by national-sales-tax promoters even took real estate sales into account, as if the same house would bear the brunt of a 30% sales tax every time it resold. Note that a national sales tax would be on top of state sales taxes, meaning that states who keep their own sales taxes in place would have rates as high as 39%. If these states follow the advice of sales tax advocates and replace their own income taxes with sales taxes, rates could approach 50%.

The effect on unrecorded sales would be staggering. Roadside produce sales will increase, with the farmers pocketing the proceeds and pretending no transactions had transpired. Businesses with underpaid workers will wink at a tolerable amount of employee “shrinkage,” (i.e., theft). Business owner-operators will charge less to those who “don’t need a receipt,” and so on. And because it will be so easy to evade the sales tax, a new bureaucracy of spies and investigators, every bit as intrusive as the IRS, will be needed to hunt down scofflaws who have the nerve to trade with one another without paying tribute. Employees will no longer have to report what they earned, but business audits will become so horrific that small businesses will disappear under the weight.

Because sales and income taxes are easily avoided at local and state levels, their use shifts power to central governments. The Jeffersonian principle of keeping governmental power close to the people is therefore undermined. As taxing power has shifted from local real estate taxes to state and federal sales and income taxes, so has political power shifted from local, citizen-dominated municipalities to lobbyist-dominated state and federal levels.

Yet even if we accept the premise that big government is necessary, there is no need to choose between sales and income taxes. Government can raise all the revenue it needs by following the original tax plan of the Founding Fathers under the Articles of Confederation. This country was born rebelling against a sales tax on tea and against the Stamp Act, which enforced another brand of sales tax, and calling for taxes to be levied against the value of land. If we were to shift toward the tax system originally advocated by our founding fathers when the revolution was on and they still needed popular support, we would have neither a sales tax nor an income tax. Prices would be more stable, government power would be local, and the economy would thrive.