Joseph Stiglitz’s latest book takes up the theme that the health of a democracy depends upon the strength of a middle class. American society’s middle class has been in jeopardy for more than three decades. In part, this stems from changes in our economy: a decline in manufacturing together with the rise in the information and financial services industry. But it is also explained by government policies that have been captured by the machinations of powerful special interests. These interests have been able to reorient our economy in ways that extract wealth from others yet do nothing themselves to earn it. Rent seeking has has become a high art in American society.

Much of this has been accomplished via the process that cognitive psychologists call framing, “the manipulation of frames, and thus perceptions and behavior” by which the public makes judgments and decisions. For example, Dr. Stiglitz points to the insidious influence of the “Chicago school” of “market fundamentalism” — the idea that markets, left to their own devices, are optimally efficient, and that government therefore has a minimal role in directing economic affairs. According to Stiglitz, these ideas fly in the face of empirical evidence in almost every instance.

…hidden and open transfers and subsidies from the government, laws that make the marketplace less competitive, lax enforcement of existing competition laws, and statutes that allow corporations to take advantage of others or to pass costs on to the rest of society. The term ‘rent’ was originally used to describe the returns to land, since the owner of the land receives these payments by virtue of his ownership and not because of anything he does…. The term… was extended to include monopoly profits, or monopoly rents, the income that one receives simply from the control of a monopoly. Eventually the term was expanded still further to include the returns on similar ownership claims.”

Stiglitz tends to default to this mainstream conception of “rent” in his writing. Yet he has, on occasion, offered support for Georgist policies that assert the particular economic character of land as a factor of production. He presented one of the original papers in 1977 to introduce what is now known as the “Henry George Theorem.” Yet, his public finance text, even in the most recent edition, makes no mention of this powerful public-policy option. Then again, in his 2010 monograph for The Roosevelt Institute, Stiglitz wrote:

One of the general principles of taxation is that one should tax factors that are inelastic in supply, since there are no adverse supply side effects. Land does not disappear when it is taxed. Henry George, a great progressive of the late nineteenth century, argued, partly on this basis, for a land tax. It is ironic that rather than following this dictum, the United States has been doing just the opposite through its preferential treatment of capital gains.

But it is not just land that faces a low elasticity of supply. It is the case for other depletable natural resources. Subsidies might encourage the early discovery of some resource, but it does not increase the supply of the resource; that is largely a matter of nature. That is why it also makes sense, from an efficiency point of view, to tax natural resource rents at as close to 100% as possible. The well-designed auctions described earlier enable government to capture most of the rents derived from government owned assets. 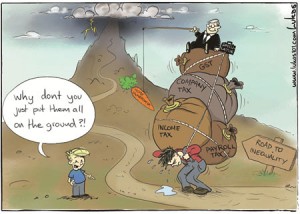 In a recent interview, Professor Stiglitz urged that some of the bankers most responsible for creating the current financial crisis should be jailed. This book is a bit more circumspect on the point, but it is clear that he holds the financial industry primarily accountable for the problems we face. Our problem is that people see little moral difference today in how one makes one’s money, as long as it is not illegal. There are those who regard earning an income as more virtuous than speculating, but the latter is by no means shameful. The investment firm Smith Barney years ago ran a television ad featuring a smug John Houseman intoning “We make money the old-fashioned way — we earn it.” It appealed to a sentiment that is becoming rare. It is not clear that Stiglitz goes so far as to distinguish between virtuous earned income and thieving rent-seeking, but he’s getting close.

If it isn’t theft, it is at best inefficient and anti-social.

The bottom 90 percent of the population gets less than 10 percent of all capital gains…. Salaries and wages accounted for only 8.8 percent of the income of the top 400, capital gains for 57 percent, and interest and dividends for 16 percent — so 73 percent of their income was subject to low rates. Indeed, the top 400 taxpayers garner close to 5 percent of the country’s entire dividends…. “We have created an economy and a society in which great wealth is amassed through rent seeking, sometimes through direct transfers from the public to the wealthy, more often through rules that allow the wealthy to collect ‘rents’ from the rest of society through monopoly power and other forms of exploitation.”

Exercised as he is about rent seeking, however, Professor Stiglitz pays essentially no attention to land rent — arguably the greatest reservoir of what rent-seekers seek. The reason for this isn’t clear. Is it because this is where the middle class gets its dribble of rent when their homes are sold for a small gain? Then, there is more discussion of the high compensation for corporate executives than there is the palpable rent from natural resources. That’s not something that I can sort out.

Stiglitz does identify, in passing, recognized instances of rent-seeking in mineral and fossil fuel resources, the electromagnetic spectrum, the pharmaceutical industry and in the insurance and finance industries. He is willing at least to regard the field of economics as amenable to some sort of moral discourse, unlike so many of his colleagues who regard it as value-free. But that judgment extends for the most part to his view of it as inefficient, and distributively unfair. It is not clear that he would

go so far as to call its practices and judgments immoral. That is what separates him from those of us who are Georgists: most of us would prefer to think of economics as a continuation of moral philosophy.

3. “Principles and Guidelines for Deficit Reduction,” The Roosevelt Institute, December 2, 2010, Working Paper No. 6.