In the United States, our Great National Hoopla is finally over, and the political landscape is largely as it was before all those billions were spent. I suppose we should be grateful for the unprecedented economic stimulus given to radio and television stations. It is easy (almost required, really) to be cynical about the political culture. But I think there are reasons for hope.

For one thing, voters approved same-sex marriages in Maine, Maryland and Washington, and rejected a measure to outlaw them in Minnesota. That suggests to me that, little by little, despite well-funded fearmongering, people can wise up to the obvious truth. My son Eli, 15, reported proudly that his high school’s mock election had voted in favor of Maine’s same-sex marriage initiative. There’s no way that the student body of my high school, not even back in the freewheeling early 70s, would ever have done that. Slaves are slaves, women cannot be trusted with suffrage, queers are loathsome perverts who prey on children, and land is private property. The times could, just possibly, be a-changin.

Not only that, but the very extensively examined journey of Hurricane Sandy could have actually tipped the zeitgeist on climate change. Pre-landfall tracking was obsessive in every form of media. Though, to be sure, this exemplifies news reporting in our new age of instantaneity (We tweeted three seconds before the networks!”), the sheer weight of meteorological data on Page One indicated deep concern. Because, let’s face it, we knew sea levels were rising and weather patterns were changing. We weren’t sure how soon things would Really Get Weird, but we knew stuff had been going on. Lower Manhattan and the Brooklyn waterfront got some bad flooding; seven East River subway tunnels filled with salt water (though the MTA did a creditable job of getting almost all of them back in service inside of three days). Folks lost power up and down the Eastern Seaboard, and things were kinda bad for a bit — but the populous and wealthy Northeast Corridor can bounce back, if any region can. In the long run I think a bullet has undoubtedly been dodged.

It will take creativity, courage and luck to deal with this problem in the

decades ahead — but I think the first step in that thousand-mile journey has just now been taken: a critical mass of people have become willing to admit that it is happening. Sorry, I’m about to immodestly quote myself; these words, written ca. 1997 for our course in Liberation Theology and Land Reform, come to mind:

One such sign is the emergence of global environmental problems and dangers. They could well prove to be a blessing in disguise. The atmosphere and the oceans belong to no one and everyone. No nation can unilaterally solve global pollution problems, and yet all nations are menaced by them. If (as seems very likely) global pollution problems worsen to the point where they threaten large-scale loss of wealth and livelihood, global cooperation on the environment will be inevitable. Once we cross that threshold, other forms of transnational cooperation will see less outlandish, and arbitrary boundaries will become less menacing. 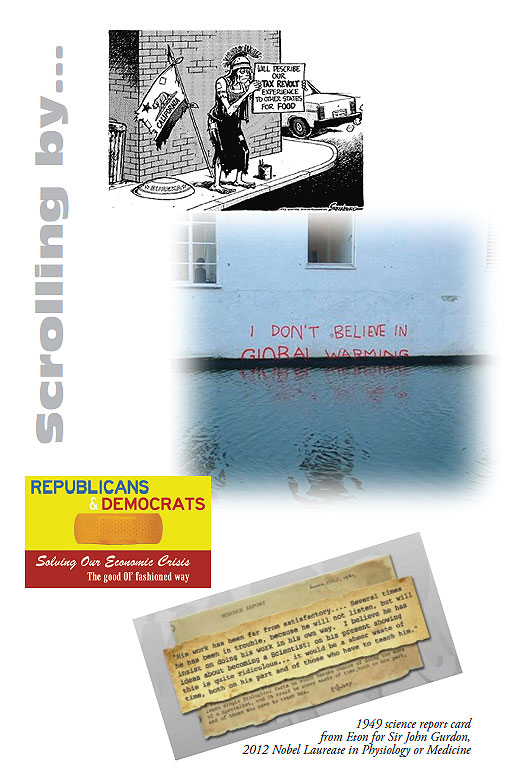