Georgists have more substantial things to say than any of the heterodox politico-economic groups on the Internet. On the Internet, though, we tend to look tired and unshaven, in a dorky suit. It’s time to dust ourselves off and get to the task of cleaning up our Internet presence. 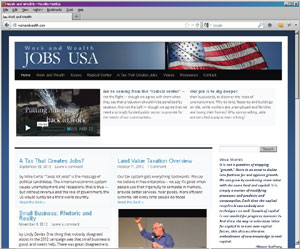 The immediate question on most people’s minds surrounding election season is jobs and the general state of the economy. The Robert Shalkenbach foundation has recently created a site devoted to the issue of creating jobs — and aims to make this site its test for effective use of online media. We’ve created a Facebook page for it as well, a social media portal to the website itself. Many have clicked the “like” button, and informed me that the website looks great — and that they’re proud to share it with those they are introducing to LVT.

Some longtime readers might be wondering about the sudden enthusiasm for social media. What’s all the fuss about?

Here’s a fact that will get your attention: as of October 2012, Facebook has one billion users! That’s “billion” with a “b.” Not all of those “users” are active, but the majority are. Still more use other social media tools, such as blogs, Twitter, YouTube, etc. Over half of social media users are younger than thirty. It’s a vast and fertile ground for outreach, and our movement’s utilization of it lags far behind many others who have (alas) far less substantial things to say.

So, by this point you should have already pulled out your laptop, looked at workandwealth.com and registered for Facebook. What next?

Go to the LVT Facebook page. This discussion group has 333 members. (I haven’t yet accepted the 5 requests from people who have asked to join the page since I started writing this article.) These are people making formal requests to join our Georgist conversations. If you’ve spent years trying to engage people with an awkward elevator speech, you know how good it feels when people actually seek you out to learn more! That happens daily on the Facebook LVT page.

The LVT page is for discussion. For specific action plans, there is also a Facebook page called “LVT Task Force” which requires users to post items such as emailing public representatives, editing specific wikipedia pages, and obtaining help with technical issues, among other things. It is a collaborative tool for our movement.

In addition to Facebook , a small group of us have been meeting weekly via Google Hangouts. We’ve developed a weekly agenda, set up plans for creating a non-profit and applying for foundation grants. We are working with designers to create branding tools and constituent parts of websites such as video organizers, carousels, 3D text imagers, and other tools that we can transplant to various Georgist websites. We’re hoping to be the technological Johnny Appleseeds of the Georgist movement.

I believe we must invest more effort in developing our web presence. It’s the best way to pull in new funds via crowdfunding websites, new people and skills via social media, and new projects via Google’s panel of tools such as “hangouts” and “docs.”

The great power of the Internet, and particularly of social media, is illustrated by the economic concept called the “network effect.” A network can create a positive externality in which the more users a network has, the more valuable it is to every single user. I really want to make sure my Georgist colleagues understand this — so they can stop feeling isolated in their lonely work! The network effect demonstrates that if we use social media collaboratively, your contribution to our movement’s work can be much greater than the sum of each of our individual efforts.