Eaarth: Making a Life on a Tough New Planet, by Bill McKibben, 2010, St. Martins, and Drift: The Unmooring of American Military Power by Rachel Maddow, 2012, Crown. Review by Lindy Davies

Georgists have long consoled themselves with some version of this thought: “What we’re offering the world is a fundamental truth. Maybe nobody is listening to us now, but sooner or later, they will, because it’s the only thing that’ll work.” Well, friends, I just finished reading two books that would, I think, convince any sane person that our civilization cannot afford to keep doing what it is doing — that right now we really, really need something that works.

Bill McKibben has been sounding the warning about climate change for quite some time; his first major salvo, The End of Nature, was published in 1990. The current volume is not a warning, however. It catalogues the obvious evidence that we are already dealing with the consequences of global climate change. He believes the changes that have been wrought are so severe that our planet has been changed in essential ways, and therefore needs a new name. McKibben says it is time to face up to the fact that

We’re not… going to get back the planet we used to have, the one on which our civilization developed…. We’re like the guy who smoked for forty years and then had a stroke. He doesn’t smoke anymore, but the left side of his body doesn’t work either.

Unlike some green-thinking folk, McKibben is not eager to rub our noses in told-ya-so; he seems actually fond of his fellow human beings, despite their mistakes. He even retains some optimism — possibly because he lives in Vermont. (I’ll never forget seeing the Vermont contingent pass by at the New York “No Nukes” rally in 1982. They were green and proud, two whole blocks long in the parade, far more than any other state.) McKibben contends that we still have a time to fashion a livable future on our wounded, compromised Eaarth. The key to success will be in hunkering down, expecting less in terms of transport and global reach, creating healthily local economic patterns. This should not, however, turn us into a society of bunker-defending survivalists. In the past, frontier communities were self-sufficient by necessity, and people felt their isolation keenly. Today, necessity may move communities once again toward self-reliance — but unless things get really horribly bad out there, they will remain connected to each other and to communities of all kinds via the Internet. 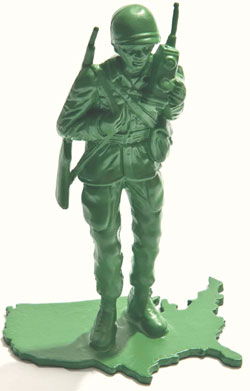 It’s interesting that a strong contingent still denies the reality of climate change. To me, the most memorable moment of Mitt Romney’s speech accepting the Republican nomination was when he sarcastically recalled how Barack Obama had promised to begin to heal our planet. It was a laugh line. Mitt promised instead “to help you and your family.” Undoubtedly, climate change is a live wire in this year’s political discourse, mainly because of the weak economy. However, such sensible political calculations don’t explain the big cheer that Romney knew he was going to get; it doesn’t explain the vehemence of climate-change denial. There is a certain contingent for whom anthropogenic climate change is, literally, unthinkable. Why? Because it is a global problem. There is only one atmosphere, and it is indivisible. Therefore, the climate change problem cannot be addressed at the national level, or understood in nationalistic terms. In the dog-eat-dog economic climate in which we live, that is a bitter pill for American exceptionalists (or Chinese industrialists, for that matter) to swallow.

That brings us to Rachel Maddow’s Drift, which offers us more surprises than McKibben’s Eaarth, but is no less worth the upsetting experience of reading. Maddow shows how US administrations, starting with that of Eisenhower, making decisions that were each, in themselves, understandable and often sensible, ultimately created a US military estabishment that is grossly oversized, uncontrollable and unaccountable. It was taken for granted during the Cold War that the United States needed such awesome military might — despite Eisenhower’s last-minute warning about the dangers of a military-industrial complex. Successive administrations found uses for the military, and reasons to continue devoting huge resources to it. (Currently the United States annual military spending is $1.735 trillion, more that the next 14 highest military budgets put together — over $55,000 per second.)

When it came to actually using military power, however, US Presidents, starting with Lyndon Johnson in Vietnam, had to reckon with the political realities of sending America’s sons (and eventually daughters) into foreign wars. Johnson avoided calling up Reservists to active duty in Vietnam, because that would involve so many regular Americans that it would force him to consult Congress. Instead, the Draft was stepped up — and because college deferments were allowed, the troops that ended up fighting in Vietnam were far poorer, less educated, and had more minorites than the general population. Johnson’s effort to fight the Vietnam war solely under the authority of the Executive Branch had much to do with the tragic unfolding of that war. After Vietnam, the US Legislature overrode President Nixon’s veto to enact the War Powers Resolution, which disallowed presidents from engaging in any military operation for more than sixty days without Congressional approval. This question about the limits of executive authority to fight wars has been in play ever since.

Maddow’s engaging accounts of the personalities and concerns of each era allow her to show how reasonable, intelligent people could have made the decisions that, nevertheless, led step-by-step to the ungodly mess we’re in. This sort of pragmatism shows up in her concluding list of recommendations for walking it back, such as

The “imperial presidency” malarkey that was invented to save Ronald Reagan’s neck in Iran-Contra, and that played as high art throughout the career of Richard Cheney, is a radical departure from previous views of presidential power, and it should be taught and understood that way…. Republicans and Democrats alike have options to vote people into Congress who are determined to stop with the chickenshittery and assert the legislature’s constitutional

prerogatives on war and peace….

Probably the most bracingly disturbing sections of Drift are those in which Maddow assesses the state of the US nuclear arsenal — its extent, its frighteningly poor state of repair, the glaring lack of any coherent rationale for continuing it. By her calculations, the US has spent more that $8 trillion, in current dollars, on nuclear weapons since 1950, “more than that half-century’s federal spending on Medicare, education, social services, disaster relief, [non-nuclear] scientific research, environmental protection, food safety inspectors, highway maintenance, cops, prosecutors, judges and prisons… combined.” Meanwhile, we have thousands of nuclear warheads that we don’t need. Some of them are so obsolete that no technicians exist who know how to service them.

So, friends, there you have it: two books — well worth reading, if you can steel youself to the task — that explain how, and why, we simply cannot afford to live like this any more. Now, are we daft enough to think this offers us any reason for optimism, or even hope? Perhaps we should be. I am convinced, and I suspect that you, dear reader, are too, that there is only one way to provide society with the wherewithal to solve these deep social problems. I further suspect that neither Bill McKibben nor Rachel Maddow, despite their intellectual courage and valuable contributions, shares this most important insight. That means that we really have only two choices. We can either a) watch reality TV and stay drunk all the time, or b) immediately STEP UP our Georgist efforts, like never before.