The Council of Georgist Organizations returns to Pittsburgh this year, for its 33rd conference, August 6-10. The occasion marks the hundredth anniversary of Pittsburgh’s adopting of the (two-rate) land value tax, the nation’s first Georgist victory in a large city. We also mourn the United States’s adoption of the income tax, a reform that was originally designed to capture rental income, and was strongly supported by many Georgists — but, alas, by slow degrees it turned into a payroll tax that grabs revenue from struggling workers. Major sessions will examine the history of Pittsburgh, the Single Tax movement, and the nation. 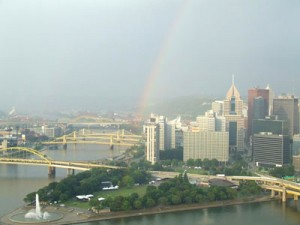 The afternoon of Tuesday, August 6th will be devoted to pre-conference education sessions, sponsored by the Henry George Institute. They’ll feature Mike Curtis, Bob Jene, Ed Dodson and Lindy Davies, showcasing new presentations and materials, and confronting the challenge of keeping Georgist curriculum relevant without diluting its fundamental messages. At the opening reception on Tuesday evening, Ed Dodson and friends will present a “reader’s theater” presentation of “Historical Voices on Land.”

Sessions on the first full day of the conference will focus on the highs and lows of Pennsylvania’s experience with land value taxation. Dan Sullivan will recount Pittsburgh’s long history of LVT success, and the disastrous botched reassessment that led to the city’s abandoning the two-rate system in 2001. A video of the 1989 hearing on the proposal to replace Pittsburgh’s wage tax entirely with LVT will give insights into the real-world debate. Leaders from Clairton and other LVT cities in Pennsylvania will recount their experiences with the reform: its beneficial incentives, and the continuing challenge to achieve up-to-date, economically valid land assessments.

On Wednesday evening: A hundred years of Georgist music — a sing-along compiled and hosted by Paul Justus.

Thursday’s sessions will open with an important presentation by historian Alex Wagner Lough on how the 1913 income tax divided the Georgist movement in the US. Next a panel will explore how the Commons Movement approaches fundamental land rights, particularly in Pittsburgh.

Thursday afternoon’s bus tour will provide “A Grand View of Pittsburgh” — a look at how land value tax has affected the city. At the Heinz History Museum Tour, we’ll learn how the Washington family’s illegal land speculation started the French and Indian War. Then we’ll fortify ourselves for the return trip with dinner at the Spaghetti Warehouse.

Friday will feature a panel on transportation and land value, with four experts detailing the challenges of providing for public transit needs in Pittsburgh and Allegheny County, and the potential for land value capture to make a positive impact, as has been seen in London, and in Washington DC.

There will be two sessions on using today’s technology for movement-building, hosted by Jacob Shwartz-Lucas and Ed Miller. First will be a “Why” session, explaining the potential of social media and showing the progress that’s been made so far with powerful online tools such as Facebook, Google Docs, Prezi and Asana. This will be followed by a “How” session: hands-on tutorials for people who want to use these tools themselves: bring your laptop. Lindy Davies will use an examination of land speculation around New York City subway stops as an example of how to pull together data from various sources into a muckraking presentation.

At the Gala Banquet, the illustrious Josh Vincent will rock the house with his wise words on movement-building through collaboration and team-building. Finally, on Saturday morning we’ll gather for our traditional champagne toasts and farewells.