Some theologians have speculated that the story of Adam and Eve was a metaphor for the transition from hunter-gatherer tribes to agricultural tribes.

In modern versions of the Bible, God commanded Adam to till the garden. However, Young’s literal translation says, “And Jehovah God taketh the man, and causeth him to rest in the garden of Eden, to serve it, and to keep it.” Nothing about tilling. Continuing, “And Jehovah God layeth a charge on the man, saying, ‘Of every tree of the garden eating thou dost eat; and of the tree of knowledge of good and evil, thou dost not eat of it, for in the day of thine eating of it — dying thou dost die.’”

In ancient Hebrew, from which this is taken, the words for “good” and “evil” are also the words for “life” and “death.” So, the tree of life and death is what? Perhaps it is the tree that a primitive (probably a woman, because women stayed in the camp areas while men hunted) raised from a seed. In other words, those who try to speculate on what kind of fruit it was miss the point — that it was a fruit that had been brought to life by “Eve,” as opposed to a fruit that nature had provided. 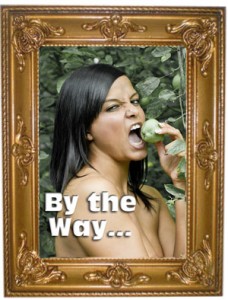 When the serpent seduced Eve into eating of the tree, he said to her, “God doth know that in the day of your eating of it — your eyes have been opened, and ye have been as God, knowing good and evil [life and death].” In other words, her eyes were opened to agriculture.

So the women, symbolized by Eve, took the blame for “seducing” the men into depending on farming. This was the beginning of an alienation from nature, because all the critters that would eat their crops were no longer sharing the earth with them, but were a pestilence upon them. And, for that matter, so were other humans, if they had no concept of property in such things.

It was also the beginning of of the division of labor, as some must tend the crops and others must stay up and guard (police) the crops. And so we have the birth of the police function. Moreover, the farmers were in the valleys, the most vulnerable locations of all, and were threatened by the more mobile tribes of herdsmen. The “surplus value” they created made them targets for plunder. So, a military function arises. The advantage of growing crops is offset by the fact that the actual workers must feed these others, who, by virtue of their military and police functions, have all the power. Ultimately, it would become the initiatory force behind property in land.

Let’s look at the specific curses the Bible says God put on Adam and Eve.

To Eve: “Multiplying I multiply thy sorrow and thy conception, in sorrow dost thou bear children, and toward thy husband [is] thy desire, and he doth rule over thee.” Anthropologists confirm that hunter-gatherer societies tend to be more matriarchal and gender-egalitarian, while farming societies tend to be patriarchal with more male privilege.

To Adam: “…cursed [is] the ground on thine account; in sorrow thou dost eat of it all days of thy life, and thorn and bramble it doth bring forth to thee, and thou hast eaten the herb of the field; by the sweat of thy face thou dost eat bread till thy return unto the ground, for out of it hast thou been taken, for dust thou [art], and unto dust thou turnest back.” Indeed, “dirt farmers” are always “eating dust,” and when land cleared for farming depletes and has to be left fallow, it becomes overgrown with thorns and brambles, and farmers, unlike hunter-gatherers, worked from birth to death, straining at both ends of their lives.

Man was no longer part of nature, and could no longer live the idyllic life that Eden symbolized, and would make him a slave to “the ground from which he hath been taken.”

And Jehovah God saith, ‘Lo, the man was as one of Us, as to the knowledge of good and evil; and now, lest he send forth his hand, and have taken also of the tree of life, and eaten, and lived to the age,’ Jehovah God sendeth him forth from the garden of Eden to serve the ground from which he hath been taken; yea, he casteth out the man, and causeth to dwell at the east of the garden of Eden

As farming populations grow, hunting and gathering will no longer support them. They have, in effect, cast themselves out of the Garden of Eden. Thus, if this interpretation is correct, the “original sin,” the sin that is passed down from generation to generation, is the transition from natural man to man against nature, from hunter-gatherer to farmer, from being one with the land to being bent on conquering the land.

The very next story in the bible is a condemnation of Cain (the farmer) for killing Abel (the herdsman). This is also clear in its symbolism, although I suspect Cain got a bum rap, because these bible stories had been passed down through tribes of herdsmen, not tribes of farmers.

One thought on “Thoughts on the Tree of Knowledge”