One of the issues we face in every society is how best to limit the powers of government to those essential to individual liberty, equality of opportunity and the protection of our equal right to a healthy physical environment. History and our contemporary experience both support the conclusion that there is no fixed set of functions to be performed by government at all times and in all places.

Henry George concluded that the place for societal intervention is wherever monopolies exist, whether natural or orchestrated by the collusion of private interests. Changes in our technological capabilities and in our scientific understandings alter those dynamics. Markets that are highly competitive may become quasi-monopolistic. Markets that are subject to monopolistic forces suddenly are challenged by the introduction of new technologies and lose their influence over prices and market share.

For at least some of us, one the most serious public policy challenges is the ways in which our methods of production are accompanied by the erosion of the life-sustaining capacity of the planet — not in some safely distant future time, but within a few generations. The near-term risks of the unknown, cumulative consequences of our impact on the planet are severe. To continue to accept pollution and habitat destruction as unavoidable by-products of economic production is suicidal. 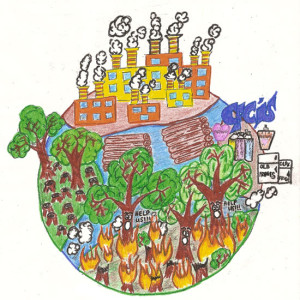 Henry George’s articulation of the Law of Rent offers some insight into how to respond to these challenges. The imposition of regulations prohibiting the discharge of waste or pollution into the environment would, by raising the cost of compliance, reduce rents yielded from the land directly involved — at least for the near term. At the same time, a cleaner environment would make contiguous and relatively close tracts of land more desirable, hence more valuable. Aggregate demand for land, and rental values, would then rise.

What we know is (all other things being equal) that potential users of any land are likely to bid more for access absent restrictions on use than where society imposes restrictions and requires stringent compliance with regulations calling for zero waste and zero pollution. Under the current means by which government raises needed revenue, the polluting entity or individual counts on the costs of remediation being absorbed by others. The public collection of the full potential annual rents changes the reasons for that behavior.

Ours would be a much better world if all people embraced the principle that we each share a responsibility for protecting the planet’s life-sustaining capacity. Unfortunately, we are far from such a day. To quote James Madison:

Any rational person should recognize the need to protect the quality of the air we breathe, the water we consume and use, and the surface land where we reside, work and play. As yet, we still have not developed the technologies and processes to meet our material needs without waste and pollution. Or, perhaps more accurately, the cost of implementing such processes are viewed by many producers as far too high for the benefits experienced. For some, self-interest rather than shared responsibility will bring them to support the public collection of ground rents in lieu of revenue from other sources.

To protect our equal birthright to the planet, I am willing to empower our government to impose the desired zero zero waste/zero pollution outcome on those who use land. How producers get there is best left to their own ingenuity, however. Forcing compliance with a complex list of specific actions is neither necessary nor desirable. What potential users will be willing to pay as rent will fall to a level acceptable to producers capable of average efficiencies. Then, in an effort to maximize profit margins all producers will adopt innovative process management techniques to minimize their cost of compliance.

The great benefit to us all would be positive externalities. With clean air, clean water, less land devoted to landfills, no storage issues for spent nuclear fuels, etc. there would be more than adequate revenue for infrastructure and other public goods and services. An annual citizens’ dividend might then become a reality. We would not be constantly faced with the public expenditures for clean-up and remediation. Not only poverty but the many environmental-related illnesses and disease would diminish to insignificant levels. There may also come a day when self-control and a widely-held cooperative spirit will diminish the necessity for government interventions.

Such positive reforms might be politically feasible at the national level. But, what about pollution that degrades the entire world’s atmosphere? Might there be a free-rider problem at the level of various sovereign governments?

The world came close to something really important when many countries signed the Law of the Sea Treaty. The US would not, because corporate interests made skillful use of propaganda about US sovereignty being undermined.

What is the moral basis for claims of sovereignty? There is none. As Carl Sagan wrote years ago, when the planet is viewed from space there are no borders present. We are one. We just have not come to terms with that fact. The hatreds that existed a thousand years ago are still a potent factor in human interaction. The right to migrate from one part of the planet to any other part of the planet is a fundamental human right, limited only by the potential to carry a communicable disease or because of a history of criminal behavior. However, peaceful coexistence seems to require that the planet be divided into enclaves where people who want to can live together under specific societal norms. If there was a global rent fund to distribute pro rata to every person, this might allow for a gradual softening of the hatreds and prejudices so that a more peaceful future could emerge.