Recently I heard a rather inspiring TED talk by George Monbiot on the notion of “rewilding.” Monbiot was discussing how the reintroduction of wolves into Yellowstone National Park brought about a wonderfully unpredictable series of cascading ecological benefits. It would seem likely that the wolves would help to control the deer population, which they did — but all kinds of other groovy things happened. The threat of wolves stopped the deer from foraging in exposed areas near streams, which the deer had been overgrazing. This sparked a revival of undergrowth and, eventually, trees along the stream banks. The new flora there provided habitat for many kinds of mammals and birds, but also served to strengthen the streams’ banks, which served to decrease soil erosion and nutrient loss, which further reinforced plant life on the banks. This local habitat-restoration attracted beavers, who industriously engineered the local habitat to attract even more species of wildlife, including fish and aquatic birds. So, Monbiot noted, the reintroduction of a top predator changed not only species’ behavioral patterns, but actually altered the physical landscape! He went on to explore the potential benefits of “rewilding” in many other places. 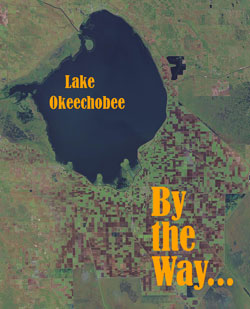 I was reminded of that idea this morning when I heard a report on NPR about how time was running out for the state of Florida to acquire a large parcel of land south of Lake Okeechobee for the purpose of repairing and restoring the ecology of the Everglades. (Well, they could still buy the land in the future; they would just have to pay the “full market” price, rather than the discount $9,358 per acre that had been negotiated, if the state were to act by the Oct. 2013 deadline.) Who holds title to the land now? US Sugar.

If ever an area deserved to be “rewilded,” it’s this one. The huge ecosystem of the Everglades depends on a large flow of water southward from Lake Okeechobee. But this is the area that has been drained and farmed for sugar cane. Not only does this cut off the flow of replenishing water to the everglades — the sugar farms also generate huge quantities of phosphorous-laden runoff into the lake. Recent heavy rains (and, one might assume, rising sea levels generally) have necessitated the opening of waterways to allow the lake’s excess nutrient-rich water to flow out toward nearby coastal communities. But, this causes algae blooms that play havoc with aquatic life and can actually be toxic to humans.

The obvious thing to do is to get rid of the sugar farms to the south and east of the lake. But to buy the land, as much as 300 square miles, would cost the state some $1.75 billion (and quite a lot more, past the October deadline). In this economy? Florida’s Tea Party-friendly Governor, Rick Scott, is loath to ask for that much from the state’s taxpayers; indeed he is proposing to sell off, to private developers, some of the lands that Florida already holds for conservation. Gov. Scott purports to believe in free-market solutions to such problems, as opposed to the “big government” policy of buying up land held by private companies. 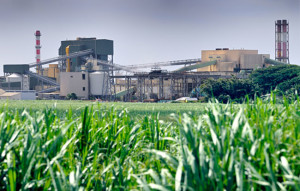 Rick Scott’s allegiance to the “free market” in this case is — to use the gentlest possible term — misplaced. There are few markets in which the spastic, blundering hand of Gummint is more evident than that of sugar in the United States. To begin with, the US has a longstanding policy of propping up domestic sugar prices with high tariffs; the “normal” price of sugar in this country is much higher than world levels. This means that when US demand for sugar is lower than normal, which it happens to be at the moment, the federal government is obliged to buy up large amounts of the stuff — to the tune of about $300 million for the current year. The government doesn’t allow itself to compete with private sugar producers, so its stockpile cannot be sold to the food industry. Where does it go, then? Why, it is dumped, at a huge loss, into the boondoggle ethanol industry, where it adds a touch of sweetness to the 30% of the entire US corn crop which is unprofitably burned as subsidized, unsustainable biofuel.

But the hits keep on coming! The US corn crop is subsidized in many ways, from the blunt edge of price supports to the subtle biochemistry of genetically-engineered superseeds. We grow a whole lot of the stuff. So much that even after the three cobs out of every ten that we burn in our cars, we’re able to make High Fructose Corn Syrup by the supertankerful, a sweetener that is, cheap, convenient and deeply unhealthy. This has contributed to the epidemic of childhood obesity as well as the dreadfully unfortunate glut of cane sugar, which made it attractive for US Sugar to consider selling off its Everglades holdings in the first place.

A few back-of-envelope calculations will serve to show how monumental a no-brainer this issue really is. US Sugar employed 9,924 full- and part-time workers in Florida as of 2008, amounting to one tenth of one percent of Florida’s labor force (it probably employs fewer now, due to the sugar glut). US Sugar pays an annual total (2008) of $12.8 million in property taxes. If we assume that the 187,000 acres cited in the 2008 purchase-option deal are their entire holdings, that amounts to a tax of $68.45 per acre.

The “discount” purchase price agreed to in the 2008 deal was $9,358 per acre. This gives us the following equation:

Solving for rent per acre, we end up with an annual rent of $345.24. That’s a low-end figure, because the actual selling price is almost certainly higher than the 2008 price (which was negotiated at the bottom of the market). But, anyway, let’s say that, because of the community’s role in creating that land’s value, as well as the land’s paramount ecological importance, it would be fair for Florida to levy the full annual rent, so defined, for holding those Okeechobee acres. In that case, US Sugar would be socked with a property tax bill of about $64.5 million — quite unsupportable for such a bloated, subsidized business.* They would flee, and Everglades denizens of many species would breathe a whole lot easier.

*It wouldn’t be an unthinkably huge burden, though: US Sugar’s combined state and local tax liability was $49.2 million in 2008. If they paid their land rent, we could release them — and all other businesses — from those other pesky sales and income taxes, and other levies on production.