The Editor’s comments in the Spring Issue on whether a movement or an organization best serves Georgists’ efforts brought to my mind a remarkable article written many decades ago. “Prisoners of the Organization or Servants of the Spirit” by W. J. Brown (an M.P., and so, knowing whereof he spoke) published in The Spectator in 1949. Brown unfolded how irremediably, simply on account of its hierarchical structure, an organization formed to promote the noblest of ideas comes eventually to betray it. The preservation of the organization itself, presenting the idea, becomes in time the ultimate priority.

Enlarging upon W. J. Brown’s article, my next great discovery was a book worthy of inclusion in every Georgist course today: Our Enemy the State, written by the 1930s author A. J. Nock, and mentioned in a footnote to his article “Isaiah’s Job,” which chanced my way in the 1960s. The public library, which finally unearthed a copy from the bowels of the prestigious London School of Economics, would not allow its removal. 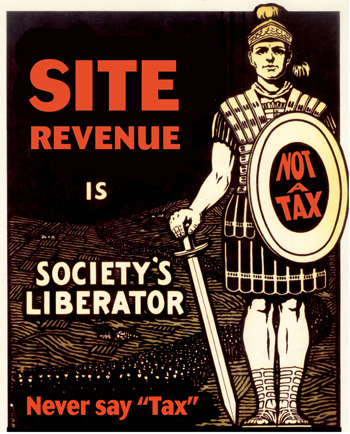 Reading the scribbled comments in its margins was like touching hands in the darkness. Covertly then (in case disallowed) I bit-by-bit managed to photocopy every page of this gem. (I now know about the excellent Nockian Society, which provides copies: 42 Leathers Road, Fort Mitchell KY 41017 )

Nock had been introduced, in his student days, to the work of Henry George, which he immediately pronounced to be ‘it!’ Nock’s work, written from a richer background than W. J. Brown’s, proved invaluable to a deeper understanding of the working of our society (whose division between rich and poor had perplexed me from childhood). Hence, in my reading of A. J. Nock’s chapter in which he focuses on society’s most exalted organization, the State, I came across this “star passage”:

Bearing in mind that the State is the organization of the political means, and that its primary intention is to enable the economic exploitation of one class by another, we see that it has always acted on the principle… that expropriation must precede exploitation. There is no other way to make the political means effective. (Emphases mine)

Who, then — standing already on the bedrock of Henry George’s work, and having chanced on W. J. Brown’s illuminating article — could miss the significance of Nock’s masterful summing-up of his book’s main purpose: “to show why the State’s system of land tenure came into existence” — and how, consequently, “if this system of land tenure were broken up, obviously the reason for the State’s existence would disappear, and the State would disappear with it.”

Having long pondered the matter of how our economic structure is woven into the political realm, I have become almost despairing of how our movement, in its organizational aspect, continues to look to the political realm to achieve the necessary radical reform. For, as A. J. Nock points out, any reversal of the present land injustice must destroy the State’s very raison d’etre.

How indeed can we expect anyone to saw off the branch of the tree they are sitting upon? Hence must follow a question of elementary common sense: how could any organization, dedicated to reversing land injustice, ever consider an alliance with the political realm? Just imagine a people’s movement looking to the politicos — for whom people at the bottom of the pile and at the grass-roots feel nothing, today, but outrage and scorn.

Yet this — looking to the political element for an alliance — seems the only explanation for another strange feature of our movement (in its organizational aspect): its tolerance of, indeed preference for, the term “Land Value Taxation” — a term full of absurdities, and indeed treacheries, as we shall see. To list some of these:

1) Land has no capital value (neither God nor the Big Bang having issued an invoice for land, as someone said) — so how can any tax be placed upon it?

2) Since the payment of land’s rent, annually, to the community, is in essence a re-payment of a community-bestowed windfall gain, how could it ever possibly be called a tax? Prime absurdity!

3) Our persistence in using this fallacious term “Land Value Taxation” successfully maintains public ignorance concerning a beautiful natural law of economics: the Law of Rent. There is no natural law of taxation, an arbitrary instrument of human devising, ever shamefully instrumented by politicians to increase the gap between rich and poor. How could we possibly sully the concept of Rent with an association of this kind?

4) This maintaining of public ignorance concerning a natural law of Rent, through our favoring of the vocabulary of Taxation, betrays our movement’s essential purpose (and the heart of the work of Henry George): the bringing of society into alignment with this great natural law.

5) All that people in general know concerning taxes is that they are bad — the less taxes the better, and best of all would be no taxation at all. Exactly what we could be telling them! We have failed primarily because people did not understand our tax vocabulary! Clear evidence of this can be seen in Geoff Forster’s article in Progress, May-June 2003, which says, “Louis Wasserman’s 1963 assessment revealed that only a few voters understood that they actually benefited from LVT; most voters regarded LVT as a tax like any other tax.” Precisely!

6) To parley on endlessly about taxes is the perfect delaying game: For instance: what percentage of tax is required? Taxes never, of course, collect 100% of their base! By contrast, there can be no parleying about Rent: Rent is rent, one hundred per cent. (But it is a word to cause consternation to the politicos, of course!)

7) Debate can continue — equally uselessly — as to whether the Rent will be enough to replace taxes. For as Richard Giles (among many others) has been assiduously reminding us, all taxes in the end are paid out of rent.

8) Society in its natural state (i.e., living in accord with the natural Law of Rent) exists in an environment of natural revenue abundance — which makes today’s policies of austerity a monstrous scam. This abundance the vocabulary of Taxation can never reveal.

9) Having seen that land has no capital value, we are left with the crunch question: What is it that they are buying and selling in the land market? There is only one monetary value that attaches itself to land (attaches itself to, not arises from): the annual rental value of sites. These annual rentals, in direct contravention of the Law of Rent, get converted into a phony, landowner-claimed “land-capital” value: essential underpinning of a land market, ultimately bringing vast dispossession of the people via land monopoly. Hence the vital matter of the 100% collection of land rent by the community. The vocabulary of Taxation cannot reveal this to us — and is not intended to.

I wonder whether some Georgists, blinded by their longtime use of the term “Land Value Taxation,” fail to perceive the perfidious nature of the land market. A letter at the start of the Spring issue actually commended the continued operation of a land market, as though it were a virtuous thing! We sorely need to get back to some of the blazing statements on the land question by Henry George — proclaiming the great moral question at the heart of his work:

The truth is, and from this truth there can be no escape, that there is and can be no just title to an exclusive possession of the soil, and that private property in land is a bold, bare, enormous wrong, like to chattel slavery.

Are we actually promoting private property in land — the very thing that is so clearly an anathema? We must take Henry George out of that dreadful fiscal cupboard we have locked him into — and send him forth into the world full-bodied again!

The treacherous terminology of taxation must be expunged from Georgists’ vocabulary; we must have no further truck with it.

There is another way in which this perfidious vocabulary has blinded us, or dumbed us down. For since the “capital” value of land being touted in the marketplace turns out to be a masked parade of stolen goods — so also are those mortgages which brought the banking world down. By far the greatest part of their value lay in that trumped-up “land price” — sky-rocketed by the inevitable price of Monopoly: the “mother of all monopolies,” Earth itself, that all have need of and none can make.

Today’s monstrous “debt” exists only in reverse: a debt of such magnitude now that it can never be repaid — after centuries of stolen land and stolen rents, along with the stolen lives of incalculable millions and the incalculable sufferings they have endured.

Surely we, who know it better than any, owe it to those still-trampled millions to declare non-existent the “debt” now so outrageously loaded upon them — loaded upon them by centuries of institutionalized robbery.

But to reveal this would make fools of the politicians, of course — along with all the big institutions of today which are their hangers-on, all solemnly, endlessly conferring on how this monstrous “debt” can be “resolved”!

In our crazy preoccupation with the politicians, we have forgotten the people waiting to hear our still unspoken words. Then let Viktor Schauberger ring out to us in the voice of Henry George himself: “Our only hope for the future is for those who see clearly the mistakes of the past to shout it from the rooftops, so that people bring in a change that can never be reversed.”*

The people! A movement! And the natural Law of Rent, exposing the robbery and the lie of debt — NOW!

* Quoted from memory. Viktor Schauberger, Austrian forester and genius of the 20th century, “Water Wizard,” ever embattled against the politicians of his own time — with whom, as with Henry George, we have yet to catch up.

One thought on “Rent — or Tax? Radical Land Reform by Its only Realistic Route”