The obvious benefits of exchange, both domestic and international, led Adam Smith and the other classical economists to oppose tax and other barriers to domestic and international exchange, including domestic excise taxes, tariffs and quotas on imports, and government-protected monopolies. These arguments sufficiently impressed the drafters of the US Constitution in 1787, that they included the “Commerce Clause” (I:8:3), which effectively prohibited states from levying tariffs against each other. In England, David Ricardo vigorously opposed the so-called “corn laws,” which imposed heavy tariffs on the import of grain. Enacted at the behest of large landowners, the “corn laws” increased their rents at the expense of workers’ wages. The laws were repealed in 1846 due to a growing free-trade movement, which by then had broad support among English merchants and manufacturers.

The classical economists vigorously opposed monopolies (single sellers) and monopsonies (single buyers), both local and national. Both practices — and often the same corporation engages in both — yield economic rent from constraining production and exchange. Monopolies arise from government grants of privilege. That’s true both for “natural monopolies” like the ownership of land, and artificial monopolies like the exclusive right to sell a certain good or provide a certain service. Smith especially attacks the mercantile guilds that controlled occupations in the cities. To become a tailor or a baker, you had first to be accepted by guild member and serve years as an unpaid apprentice. Like today’s Medical or Bar associations, the guilds acted as cartels, keeping up prices by restricting membership and preventing competition.

While cities created guilds, monarchs or Parliament issued charters. These were special trading privileges, such as a monopoly on silk imports or the right to found a colony, granted to influential nobles or merchants. In fact, tariffs often served to protect these monopolies  —  and enrich the monarch. England, France, Netherlands, Spain and Portugal were perennially at war over trading monopolies. The British Navigation Acts barred the American colonists from manufacturing, and forced them to trade only with the mother country. When the British East India Company teetered on the verge of bankruptcy, Parliament gave it a special monopoly to sell tea in the colonies — inspiring the 1773 Boston Tea Party. The colonial revolutionaries played on British-French animosity to get vital French aid. The classical economists hoped international free trade would put an end to war!

The classical economists did not oppose all taxes. On the contrary: they supported taxes on the value of land and other natural resources. The British “financial revolution” of 1690-94 was founded on a stiff land tax (four shillings to the pound — 20%!), used to pay interest on bonds. (The bonds were issued to fight an ongoing war against the French.) Land taxes did not impede exchange, but rather fell on passive wealth.

Changes in Law and Reality

The world has changed in significant ways since the time of the classical economists. Governments have become a larger part of modern economies: in 1900, US government spending was less than 7 percent of GDP, and most of that was local government. Today, government spending is around 40 percent of GDP, and half of that is federal. Other major changes include: 1) the proliferation of corporations; 2) the appearance of new and often mysterious non-physical “products” including “financial products” like “collateralized debt obligations” and 3) the increasing power of giant international oligopolies.

Corporate charters were once a scarce privilege. They were granted by governments one at a time for specific purposes, such as founding a monastery, a trade guild, a colony, a town, or a college. Charters also went to “joint stock companies” like the British East India Company, with its monopoly on trade with India. Typically, such charters granted limited liability, meaning that members or investors were not personally liable for losses. In the case of trading monopolies, limited liability made it easier to raise money.

In the US, only in the nineteenth century did state governments begin to grant private owners a right to incorporate — setting off a race to the bottom in lax requirements — a race won, in our time, by Delaware. By the end of the century, monopolistic and monopsonistic abuses by the “robber baron” trusts, such as Standard Oil and AT&T, led to demands for federal action. Eventually, first during the “trust-busting” era of the early 20th century, and again during the 1930s, large corporations were broken up or otherwise restricted. Thus government came to rein in privileges once too freely granted.

Starting in the Reagan Administration during the 1980s, policy shifted towards deregulation, and serious anti-trust activity petered out. National and international mergers accelerated. The Glass-Steagall Act of 1933, prohibiting commercial banks from engaging in investment banking, was repealed in 1999, facilitating bank mergers and helping to bring on the crash of 2008.

The classical economists thought of “exchange” in terms of physical commodities — wheat, sugar, cloth, coal, steel, gold and silver. Today’s markets, domestic and international, have expanded beyond physical products. We have large international markets in contracts, such as stocks, bonds, futures, patents, broadcast licenses, fishing rights, and even in “derivatives” like credit default swaps. Along with markets in contracts comes a vast thicket of international treaties to make those contracts enforceable. Many of these contracts, such as patents, in fact convey monopolies — so now we have international markets in monopoly rights — the antithesis of the original concept of free trade. 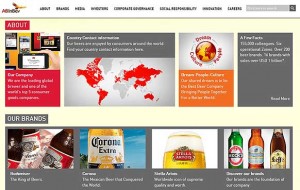 In Cornered: The New Monopoly Capitalism and the Economics of Destruction, Barry Lynn reports the growing power of international oligopolies. A handful of giant corporations — sometimes only one — now dominate almost every field of production or service. For example, two giant distributors, InBev of Belgium and SAB of South Africa, control the world beer market — including famous brands like Budweiser, Michelob, Stella Artois, Kirin, Tsingtao and Corona.  Almost the entire worldwide optical business, from manufacturing to sales outlets, belongs to a single giant Italian firm, Luxottica. The giant multinationals of course do as monopolists traditionally do: They restrict output to raise prices, reduce variety, and cut back research on new and better products.

The multinationals also act as monopsonists — sole buyers. In this role, they squeeze suppliers, eliminating many altogether and forcing the survivors to take shortcuts. The US auto companies, GM, Ford and Chrysler are no longer vertically integrated as they were a generation ago, each with their own independent supply chains. Today they all rely on the same handful of parts suppliers. The squeeze on suppliers by Walmart or Apple helps account for the appalling working conditions in Bangladesh or China. More ominously, according to Lynn, the reliance on very few stressed-out suppliers creates a serious risk of global disruptions. For example, there have been recurrent shortages of vaccines and cancer drugs due to technical problems at the plants of the few remaining manufacturers.

Ironically at the same time that the classical economists were promoting free trade, England led the pack of Europeans in conquering and exploiting overseas colonies. They forced these colonies to deliver cheap raw materials to the mother countries, as well as slaves to the Americas, and to accept unwanted goods in exchange — notably opium in China. Today, the colonial empires are gone in name but not in reality, as multinational corporations fill the Swiss bank accounts of local strongmen in exchange for minerals and agricultural commodities.

In this way, the international oligopolies also create a serious risk to world food and other agricultural staples like cotton and oils. By continually forcing down prices, the oligopolies have put many “inefficient” third world producers out of business. For example, Haiti stopped growing rice twenty years ago. Consequently, when bad weather, pests, war, or other crises damage crops, prices skyrocket and food riots break out due to the lack of alternative sources.

The proliferation of protective regulations in modern nations raises major questions for international trade, especially trade between developed and less developed nations: Whose rules should prevail, and how should rules be enforced and by whom? For example, should developed nations limit imports from third world nations that pay low wages and don’t enforce worker safety laws? What about shrimp from Southeast Asia, where shrimp farms are destroying mangrove swamps? What about palm oil soap, when palm oil plantations are destroying Indonesian rain forests? Finally how should nations deal with the international oligopolists, who have the implicit or even explicit support — including military support — of the US and other powerful nations?

In the transition from classical to neoclassical economics, the meaning of the terms “free market” and “free trade” subtly changed. The term “free” came to mean “free of government interference.” This is sheer ahistorical nonsense. From the earliest times that people have regularly met for exchange, government has necessarily provided at least a safe physical space. That government might have been no more than the local chief, who protected the traders for a cut of their profits. The early Sumerian, Chinese and Egyptian governments not only provided market places; they also built roads to those markets. They established and enforced systems of weights and measures, as well as standardized forms of money. They also drew up sets of rules, such as the Code of Hammurabi, and provided courts to resolve disputes. In the time of Christ, under the Roman Empire, it’s no surprise to find money-changers in the temple courts, along with all sorts of other merchants — because that was a nice, safe, central location for a market. 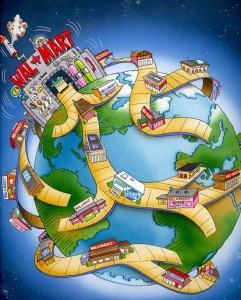 Genuine free markets require governments that actively prevent coercion, fraud or monopoly. Good modern governments also help participants find the information necessary to make good decisions, such as requiring accurate labels. And they restrict transactions that could do damage outside the market, for example, barring trade in skins of endangered cats, or requiring background checks on gun purchasers. Even further, genuine free markets require governments that provide some sort of social safety net, including bankruptcy protection, to enable participants to risk innovation, and to protect losers when tastes and technology change. Yet conventional economics textbooks assume genuine free markets just pop up spontaneously like mushrooms after a rain.

While “free markets” implicitly assume a single government, “free trade” necessarily implies the involvement of multiple governments. That’s where problems really begin. Different governments have different rules for labor, property rights, environment, health, consumers, patents, finance and many other areas. They also incline to protect “their” citizens and corporations against the others, regardless of merits.

International trade agreements originally — and to some extent still — serve a reasonable purpose. “I’ll reduce tariffs on steel imports if you’ll reduce tariffs on wheat imports.” That’s always a tough deal to make given pressure from domestic producers of steel and wheat, as well as possible job losses for workers producing steel and wheat. But such a deal increases competition and lowers costs overall, while domestic safety nets should compensate losers.

The new style of trade agreements, GATT-WTO, especially bilateral agreements like NAFTA, Columbian and Korean free trade agreements, and the proposed new Trans-Atlantic Free Trade Agreement (TAFTA) and the Trans Pacific Partnership (TPP) — these are different animals altogether. In essence they say, “I’ll enforce your monopoly if you’ll enforce mine,” and “I’ll wipe out my regulations if you’ll wipe out yours.” They are the ultimate gift to multinational monopolists, granting them worldwide protection from competition and regulation. They are royal charters on a global scale, constraining the domestic policies of subordinate nations just as the old British East India Company controlled Indian trade and taxes.

Free domestic trade remains vital to economic functioning, subject to reasonable restrictions for protection of consumers, workers and the environment. Free domestic trade should also include protection from monopolists and monopsonists — a central idea of the classical economists, but now almost forgotten.

Genuine free international trade remains vital too, especially for smaller nations. However international “free trade” has often come to mean in practice freedom of multinational monopolists to strip natural resources from third world countries, to gouge consumers and squeeze suppliers. This is quite the opposite of what the classical economists meant.