How can some of the richest places on earth pay so little in tax? The poorest county in the Commonwealth of Massachusetts is Berkshire County. The postindustrial collapse of the United States took a large toll, taking population and hope away from the westernmost part of the state.

It also should come as no surprise that Middlesex County leads the state in most economic indicators, as demonstrated by its stratospheric property values. What’s really interesting, though, is Nantucket — at once a county, a town and a naturally gated community. Its property value shows that it truly punches above its weight, exceeding Berkshire County by about $1 billion. 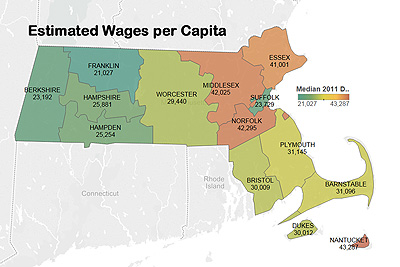 “What’s the connection?” you might ask. It’s a fair question; the answer is a matter of tax incidence. Massachusetts has a flat income tax rate of 5.3%. There is a higher bracket of 12% that falls mostly what we would call capital gains. There’s also the sales tax of 6.2%, and a business tax of 8%, which is also a flat rate. The ‘Taxachusetts’ of old now has a friendly environment for labor and capital, more competitive with New Hampshire. But, can Massachusetts take the leap and encourage free markets the way New Hampshire does? That would mean heavier reliance on the 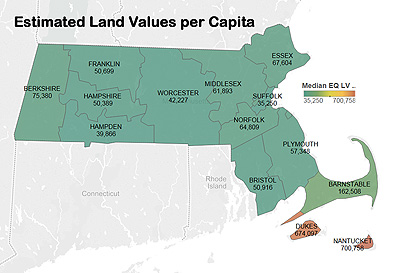 property tax, to the exclusion of other harmful taxes. Currently, Massachusetts has trouble paying its bills. Pension obligations are shaky. Wages provide about 50% of state tax-generated revenue. The best alternative that anyone’s come up with recently has been casinos, a strangely regressive idea from Governor Deval Patrick, who has since moved on to Mitt Romney’s old stomping ground at Bain Capital.

Gambling and the flat income tax are ostensibly designed to help the struggling citizens of Berkshire County and poor cities like Holyoke and Springfield. But, because they are both extremely regressive, they will do exactly the opposite. What’s the alternative?

Cities and towns already impose a property tax on land, buildings and personal property. Taxpayers must maintain services and infrastructure that have been in place for hundreds of years, even though the industrial economy has evaporated in many areas. That’s why we have the conundrum of Berkshire County, whose residents can’t afford it, imposing a massively greater real estate tax burden than Nantucket, whose totally can.
For policy recommendations, we look to the likes of Adam Smith, Joseph Stiglitz or Henry George. Those three wise men agree that community created land value depends upon neither the investment of capital nor the investment of labor. Community created value ought to be returned to the community

The Wealth Is in the Land.

This is the first estimate of what the statewide land value tax would provide at a nominal rate. We are starting with a rough estimate of land values at about 40% of all taxable real estate. Since buildings require hard inputs of labor and capital, we recommend not including them in any statewide property tax; taxing buildings is an unnecessary drag on the state’s economy. Once the task of data-collection is completed, it will be possible to determine what a state land value tax would raise in each municipality — and therefore to specify what savings individual taxpayers would enjoy.
Using a blanket estimate of land values comprising 40% of total value in each county, we apply the current income tax rate of 5.3% and apply it instead to land values.

Middlesex would still pay the most, although we would be removing the income tax in that most vital economic center of the Commonwealth. All the other counties would save — except for two: Nantucket and Duke’s (think Martha’s Vineyard and Chappaquiddick, and other happy hunting grounds for our modern plutocrats).

The key to this reform is understanding that the summertime is the only time to be in these two counties. Nantucket’s year-round population is about 10,000; it increases sixfold in the summer. In Martha’s Vineyard, there are about 16,000 year-rounders, and up to 100,000 in the summer. When we talk about taxing land values in Massachusetts, we’re talking about having very wealthy and powerful people take on some of the tax burden that’s currently felt by those who bus their tables, clean their houses or — further away — sit in sad poverty and idleness in towns like Berhskire County’s North Adams.

Note to the reader: This article is presented as a thought experiment, not a fully-documented policy proposal. — J. V.