Readers may have noticed a lack of Letters to the Editor in recent issues. It’s not because we don’t want them! It’s a situation that has puzzled me. I mean, I don’t flatter myself that thousands of people drop everything to read every word the minute their GJ arrives — but I have no reason to believe that our number of opinionated readers has fallen that far. 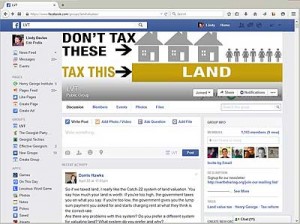 Could it be that Georgists are spending more of their energies discussing these issues online, in realer time? Recently the LVT discussion group on Facebook got its 1,000th user. Here are some excerpts from a recent (April 22-25) conversation there.    — L. D.

Darris Hawks — So if we taxed land, I really like the Catch-22 system of land valuation. You say how much your land is worth. If you’re too high, the government taxes you on what you say. If you’re too low, the government [buys you out with] the lump sum payment you asked for and starts charging rent at what they think is the correct rate. Are there any problems with this system? Do you prefer a different system for valuing land? What system do you prefer and why?

Shea Lafayette Valentine — It makes the risk of confiscation too high. I still prefer objective assessment (math) with error bars.

Darris Hawks — Can you describe the process for me for objective assessment in a way that I could explain it to a republican who thinks the mention of the word tax makes you a communist?

Mark Foster — The moral case for capturing unearned rents, which I do believe is very strong and worth making, seems to demand an equivalently strong materialization in its real world mechanisms…. But taking this too far is a mistake imo, we don’t need perfect valuations, or capture all of the rent to make it a great deal fairer than what we have already…. The Sun Yat Sen catch 22 is sort of fun hypothetically, but I think it would spook far more people than it appeals to, especially if it applied to residential property. I’m sticking with LVT vanilla.

Henry Law — Land should not be taxed on the basis of its selling price anyway. Anyone who understands LVT properly would not advocate this. Land price is a proxy for land rental value. LRV for tax purposes must include the actual tax already paid, i.e. it is gross rental value that is the basis of the tax.

Fred Foldvary — The effective way to implement LVT is for government assessors to obtain the value of land and rent from market prices. If the title holder disagrees, he may then either appeal to a board, or self-assess. Let the real estate professionals do the initial land valuation.

John Burns — That never occurred in Denmark. Money was diverted into enterprise, not rent seeking, and land values rose as land was in demand for enterprise purposes. This was unexpected. In the long term, land values would drop overall as the economy settles down with boom-bust eliminated. Land values will never be zero across the board as some land is always more desirable by its location.

Henry Law — …Land has a rental value. Under LVT, some of that value is collected as public revenue, the remainder goes to the land owner. The selling price is the capitalisation of the revenue stream retained by the land owner. The rental value does not drop just because government is collecting some of it. Under an LVT system it would change but that is for other reasons. e.g. the margin would rise, vacant land would come into use and people would be able to pay more for land if they were not paying other taxes. The effects go in opposite directions.

Nathan Johnson — Darris Hawks, by what means would the government decide whether to tax you on what you say?

Henry Law — John Burns, It is land prices which drop under LVT. Land values, i.e. rental values, don’t necessarily drop, though they might. Reduction of existing taxes tends to drive land values up.

John Burns — People go into enterprise when starting out. They do well and make enough to then move over to rent seeking, like buying houses (land). Or like McDonalds, using enterprise (hamburgers) as an enabler for the greater gains in rent seeking (appropriation of commonly created wealth shown in land). Land “prices” is what it is about when you are buying land. Value is abstract, cash is reality….

Think of LVT as a running maintenance charge. I know a man with a 15 year old Jaguar car. He bought it new and it has only done 8,000 miles and is immaculate. It is worth no more than a 13 year old Toyota Avensis in good condition, because the people who pay £1,500-2,000 for a car will not want to pay the “heavy” service charges for the Jag. The Toyota a is cheap to maintain. The overheads drop the asking price, even for a car which is clearly of greater quality.