The debate over the Trans-Pacific Partnership, or TPP, arouses Great Passions. This is not a new thing. Debates over international trade have aroused great passions for the better part of two centuries. Why do these questions seem so intractable?

The basic argument for free trade is quite simple. They make nice lightweight hats in Panama, excellent cigars in Cuba; London has deep wellsprings of legal scholarship; poppies grow well in Afghanistan. It pays to do more of what you do well, trading your surplus with others who are good at making the things you want.

I’m old enough to remember when “imported” products had cachet. If someone is willing to go to all the way over there to get the stuff, it must be better! Right? I was chagrined to encounter my own illogic in this regard when, in a Glastonbury pub, I ordered some Tanqueray gin. It was my favorite brand here in the states. I thought I’d enjoy it at its source, but the barkeep had no idea what I was on about. He went and asked his more-experienced mate, who explained that Tanqueray was just the rotgut they bottled for export. “You want Gordon’s” he said. Was I being hoodwinked? The gin & tonic tasted pretty good, but I was confused; in the US, Gordon’s is the rotgut. Economic behavior is complex. Often, value is shown to be subjective; in blind taste tests, a surprising number of people choose the rotgut.

You can’t deny that international trade has many advantages. Asparagus, for example, is a spring vegetable with a short growing season — yet you can pretty much always get it at your supermarket. In 2009 the United States imported 344 million pounds of asparagus. Most of it came from Peru, where tariff reductions, aimed at incentivizing crops other than coca, have had a good effect. But, winter comes to the Southern Hemisphere during California’s growing season. The US managed to export 16.4 million pounds of asparagus in 2009. (The asparagus champion is China: 88% of world production.)

Protectionism, on the other hand, can create real problems: the SUV craze, for example. By the turn of the century, the US auto industry had hit the skids. Detroit’s reputation for innovation, snazzy design and high resale value was a bygone thing. Tariffs and quotas increased the price of imported cars, but not enough. What to do? Rather than working to build a better vehicle, the US auto industry, with help from the tax code, set out to build a 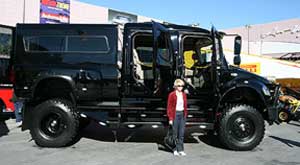 better market. Automakers already offered well-established brands of pickup trucks. Because these were designed as work vehicles, they were subject to less-stringent CAFE emission standards — about 40% less than passenger cars. The running gear was already in production; all they had to do was to slap luxury bodies on them, with air-conditioning, nice upholstery and sound systems: Voila! The Sport-Utility Vehicle was born. They were big, heavy, carbon-belching gas guzzlers — and, if you use an SUV for work, even a little, it can entitle you to a larger tax deduction than a regular-size vehicle! Make no mistake: the SUV is a harmful phenomenon that was almost entirely created by protectionism.

More complicated than that

Starting with the North American Free Trade Agreement (NAFTA), however, the international trade debate started to be about more than simple trade in goods. If it were just a matter of free trade, we’re told, it would be fine, but NAFTA also restricted nations’ rights to protect their environments, or the safety of their workers. These “nontariff barriers to trade” were disallowed under the agreement. Transgressions would be adjudicated by an unelected panel, whose members would represent the transnational corporations that helped to write the trade rules in the first place! Thus, critics claim, NAFTA (and, to a greater or lesser degree, every international trade pact that followed) served to undermine national sovereignty and increase the power of multinational corporations.

The NAFTA agreement was over 300 pages long. Proponents of free trade point out, sensibly, that you don’t need 300 pages of regulations to cut tariffs. Chapter 11, which deals with investor protections, is particularly notorious. It provides, essentially, that a business may sue for damages if a country’s regulatory policy reduces the profitability of an operation that a business has established there. This is a big part of the much-talked-about “race to the bottom.” After all, escaping regulation is a big reason why corporations have moved where they’ve moved.

Public Citizen has published a handy chart of all the Chapter 11 suits that have been brought to date, against the United States, Canada, Mexico and eight other nations (now known as NAFTA-DR/CAFTA). It is interesting reading. A few facts jump out:

Was NAFTA more bad than good?

The TPP has been called “NAFTA on steroids” — but there is probably some hyperbole in that. NAFTA serves as the basic model for multilateral trade agreements in the 21st century: tariff reductions, investor protections, mind-numbing complexity and opaque process. One way, therefore, to sort out our thoughts about the prospect of the TPP is to ask whether, on balance, NAFTA has been a good thing. A clear answer to that question, however, is not forthcoming: there is a whole lot of partisanship out there.

I tried to sample various points on the ideological spectrum to try to get a handle on that question. Everything is rhetorically churned-up; one must wait for the mud to settle — but agreement slowly emerges on a few points:

…there is a real risk that individuals moved from low productivity-employment in a protected sector will end up zero-productivity members of the vast ranks of the unemployed. We can argue over why our economy isn’t performing the way it’s supposed to — whether it’s because of a lack of aggregate demand, or because our banks, more interested in speculation and market manipulation than lending, are not providing adequate funds to small and medium-size enterprises.

Even the conservative Peterson Institute on International Economics, which issued a detailed report in praise of NAFTA on its 20th anniversary, concedes the precipitous rise of inequality — but “Whether globalization makes a major or minor contribution to the good fortunes of the ‘top 1 percent’ is another question, one that we do not explore.”

The Obama administration stands resolutely behind the Trans-Pacific Partnership. Indeed, critics of the agreement may end up making common cause with congressional Republicans who simply want to thwart anything Obama tries. For his part, the president has urged us not to equate TPP with NAFTA. For instance, the Washington Post reported:

Obama… has urged Democrats not to view [the TPP] in the same frame as past deals, such as the North American Free Trade Agreement. The president said the TPP aims to boost workers’ rights and environmental standards for businesses in some Asian nations. “Don’t fight the last war,” Obama said.

Nevertheless, the devil is in the details, and wow, are these international trade pacts ever detailed. Though the basic shape of the TPP (basically) resembles that of NAFTA, there is one very significant difference: its strategic significance. It is more than just a trade thing; it is part of Foreign Policy. The “giant sucking sound” that Ross Perot famously predicted would come from NAFTA never really materialized — but there has been a significant suction of jobs Chinaward. The People’s Republic of China keeps its own counsel on trade matters; it is not the least bit interested in entering into a trade pact with the US, and it would like to have as much economic influence over its Pacific-rim neighbors as it possibly can. Thus, if the United States fails to secure a trade partnership with the countries in the region (a region which, in today’s shrinking world, includes places like Chile and New Zealand), China most likely will. And it will do so under even less stringent safety and environmental rules, arbitrated through even less transparent mechanisms, than are likely to be in force under the TPP.

There is a reason why trade issues get so complicated, run hundreds of pages, take tens of years to negotiate and are never adequately explained. I think there’s a basic, structural reason. The same reason explains why the US Tax Code is so absurdly huge and abstruse. It has to do with privilege: large and small.

Privilege is the Product

Here’s the thing: we live in a political/economic world, today, that is utterly suffused with privilege. Economists talk about “rent seeking” — but that term is subtly inaccurate, I think; it implies that rent needs to be actively sought — when in fact, it’s everywhere, all around us, influencing every decision we make. We might not get the rent. Most of us get very little of it, indeed. But we know it’s there to get. What else explains the insane popularity of casino gambling, sports betting, state lotteries? 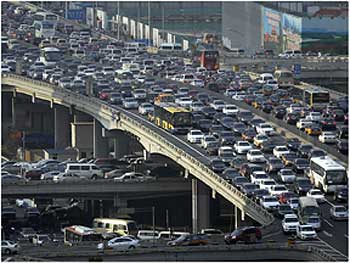 China: Not so many bicycles, these days

What modern trade agreements do is apportion privileges. Though they do serve to lower tariff barriers, which is a good thing, calling them “Free Trade” is an Orwellian inversion. That’s why they they must be complex — every local widgeteer wants to preserve his widgetorium’s profitability (oh, and the jobs, those too). Competitiveness at whacking out widgets is not what counts; one does not get ahead by actually making things. It’s all about connections and pork.

That means that in our economy, the real product is privilege. Goods and services are merely the understory, the context in which privileges are traded. The text of a NAFTA or a TPP can be seen as a modern Domesday Book — a record of allotted spoils.

How did we get here? Well, I think that many people have a sense of our messed-up economic order as a dystopian market of privileges, to which actual production is incidental. However, not very many many people realize that these everyday privileges, these little bits of trade protection or union contracts, patent, subsidy, or tax-deductible charity organizations, are small change. All of them are just offshoots of the basic privilege, the mother of privileges, and the one that will still be left even if, one by one, those small privileges are all abolished.

An economy in which privileges are the product is, by its nature, inefficient. We waste time and energy, in bribing and whining, that we could apply to figuring out how to make a better widget with less work. Getting rid of a small privilege — such as, say, the menu of pork that makes a Ford Expedition seem like a sensible vehicle choice — makes the whole economy more efficient. When the economy gets more efficient, the factors of production — labor, capital and land — are worth more. Labor can work harder, and produce more capital. But you cannot — ever — do that without land! Owners of land, as such, make no contribution to production, yet they collect an ever-increasing fee, just for allowing land to be used. That is the mother of privilege. That is, as Henry George so aptly put it in 1886, “the robber that takes all that is left.” It’s something we usually take for granted. Just the way things are. Yet it is the source of all the complexities and dysfunctions that underlie the debates on international trade. Until we understand that, we’ll never make sense of “trade issues.”