All who stand for truth and justice cannot but acknowledge that the greatest challenge facing mankind today is not political democracy but economic democracy.

This assertion is supported by the fact that the gulf between the haves and the have-nots is ever-increasing. Africa has produced 50 billionaires in the last year. Nigeria boasts the richest woman on the continent — a continent that is bedevilled with grinding poverty.

It is indeed paradoxical that embarrassing poverty should continue to thrive in an age when push-button technology has made the production process so much more efficient. The misinformed fallaciously attribute the endemic lack and want in the society to the overstretched carrying capacity of the world’s resources. The challenge before the world is one of equitable distribution: too few people controlling most of the wealth. Nigeria’s outgoing President Goodluck Jonathan admitted this much at a recent media event.

The development story of Nigeria is a tragic case of squandering of riches by the political class. Nigeria is a classic case of the rentier state, to the utter shock and bewilderment of the helpless suffering masses. Even our overseas development partners, who connive with our leaders to plunder our nation’s wealth, are amazed at the brazenness with which we steal and waste our own resources. 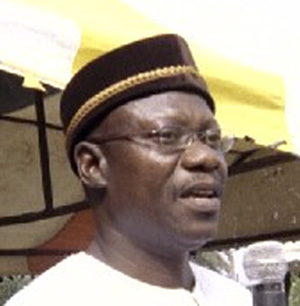 A recent account of our GDP placed Nigeria’s economy at number one in Africa, ahead of South Africa. But such growth has not elevated the living conditions of the common people, who ask, “Can we eat statistics?” From the hamlets and villages to the cities, the problems are rampant: grinding poverty, palpable frustration, kidnapping for ransom money, oil theft, deadly insurgency and other social vices like prostitution and cultism in our schools.

According to the Agriculture Ministry, Nigeria has spent over a trillion Naira over the last thirty years subsidizing corruption in the fertilizer supply chain. The result is that farmers do not get fertilizers to improve farm yield; subsequently more foods have to be imported. These same fertilizer scammers become double beneficiaries: they are also among the main food importers.

The oil sector, however, boasts the highest level of corruption. Billions of dollars in petrol subsidies have found their way into dubious petrol dealers who are often well connected to the corridors of power. The public demand for the Federal Government to release its audit report on an alleged missing $20 billion in oil revenue falls on deaf ears.

Crude oil sales account for over 80% of Nigeria’s foreign exchange earnings. This overdependence on oil has made the Nigerian economy susceptible to oil price shocks in the international market. Now that the oil bubble has burst again, Nigerian leaders are calling for more sacrifices. There are threats of job cuts in the civil service, starting with the devaluation of the currency.

There are also calls for the masses to continue to fast and pray for the Nigerian economy and her leaders. Nigeria is a deeply religious country. For millions of Nigerians, the question of whether these leaders deserve our prayers is real, not rhetorical. Nigerian lawmakers rank among the highest-paid in the world.

According to newspaper reports, US Senators earn $174,000 per year, and British Members of Parliament earn $64,000. A Nigerian Senator, on the other hand, takes home the annual  sum of $1.7 million, and a Member of the House of Representatives gets $1.45 million per year. And this is the trait from the national to the state and the local government levels. The common parlance for those who have won elections into public office is: “This is our turn.”

How can we change this mindset? Henry George was right when he identified the socialising of rent as the way out. If everyone is guaranteed equal right to the earth’s resources, all the special privileges and monopolies that distort the distribution of wealth would not be there.

Our politics today is laden with political patronage, resulting in governments being held to ransom by a few.

That Georgists have the solution to the challenges of wealth distribution is not an overstatement — but how do we get those who already have their fingers fully on the pie to let go for others to have a piece too? Sometimes I cannot help thinking that only an Alodia style revolution can effect the change we so desire. And then again, we as Christians believe that Jesus Christ will someday come and effect the sweeping change that will truly usher in lasting peace, justice and prosperity.

For now, as dedicated Georgists, we shall continue to appeal to the conscience of our politicians, and to the reason of our fellow citizens, about how to entrench justice and equality for all.