Godfrey R. A. Dunkley was one of the mainstays of the “International Union for Land Value Taxation.” As far as I know he joined every one of the IU’s international conferences until the 21st century when he went into his eighth decade, and he was almost always joined by his wife Yvonne.

Godfrey was committed to the idea that all citizens should equally share the values of nature and society, the spirit of which he got in his younger days at the School of Economic Science in London, where he joined courses in Practical Philosophy and in Economics. He also used to attend the school’s annual conferences held at Waterperry near Oxford. 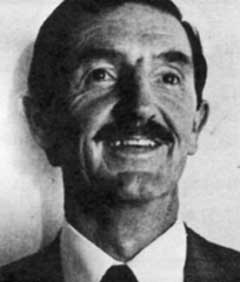 Yvonne and Godfrey and their family lived most of their lives in Cape Town, South Africa, where Godfrey practiced as an electrical engineer. Together with others who shared his views, he took active part in discussions about political problems in RSA, lobbied for Land-Value Taxation at local and national levels and explained to active politicians how Henry George’s theories could be used in practice.

In 1990, years before the end of Apartheid, he published his book That All May Live: Guidelines Towards a Better Society about the way in which black and white people could live together in harmony in the Republic of South Africa.

In 1994 Godfrey visited Copenhagen, Denmark, where — at a public meeting held by the Danish Henry George Foundation — he spoke about the issues dealt with in his book That All May Live. At that occasion he visited Per Møller Andersen’s and my homes.

Some years ago Yvonne and Godfrey emigrated from Cape Town, RSA, to West  Australia to live nearer to their son and his family who had already settled down there. Here Godfrey joined and was actively engaged in The Georgist Education Association of Perth.

Godfrey was one of the world’s stout proponents of Land-Value
Taxation. He will be long remembered and missed not only by his surviving relatives, but indeed by the international Georgist community.

All honour to his memory.