Pity the poor Georgists; they mean so well; they have such admirably momentous ambitions, but they’ve put all their eggs in one nineteenth-century basket. There’s so much more going on today! So many sources of privilege and exploitation — so many like-minded activists with whom we could make common cause! Yet here we remain, stuck in the aqua terra of land. Now and again some prominent (or, even, potentially prominent; we’re pretty desperate) commentator comes along, pats us on the head, and offers a list of nostrums that that’ll get us out of the mud!

The concept of “rent” is a very important one in Progress and Poverty, and Georgists have been talking about rent for a long time. We’ve done so in isolation, mostly; we’ve gotten pretty lonely. This means that when someone out in the Real World mentions rent, or even (Ooh!) rent-seeking, we become ferklempt.

Henry George said, “We must make land common property.” It’s been hard to get many people excited about this. Recently, though, there has been a spate of pundtiry concerning  some things that should be owned — and looked after — in common: there is now a Commons movement. This has excited some of our colleagues nearly to a state of fidgetyness.

The notion of dividends is another million-dollar idea. Nobody likes taxation! Candidate Arselarge wants to collect the rent of land for public revenue. Candidate Bigbutt wants to share the rent with you in a Citizen’s Dividend! Who’s got your vote? 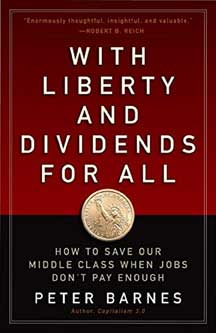 Barnes’s other books include Capitalism 3.0 and Who Owns the Sky?

Yes, Georgists have toiled for so long in such obscurity that they deserve some sympathy for enthusing over Next Big Things; life is long. But, assuming that we care about actually bringing about a just and prosperous economic order, we can’t excuse fuzzy and superficial thinking. If these easy workarounds, these flashy billboards, actually worked, they’d have already occurred to us. How do I know that? Because they have. Many times.

Which brings us to the works of the “writer and entrepreneur” Peter Barnes, especially in his latest book, With Liberty and Dividends for All, the promotional tour for which included a stop at last summer’s CGO conference. The book’s subtitle is “How to save our middle class when jobs don’t pay enough.”

Barnes says the way to do this is to create a fund of “co-owned wealth” whose income can then be tapped to pay a citizens’ dividend. He figures that there would be enough to provide a guaranteed basic income, as much as $5,000 a year, maybe more, to every citizen. His argument for a universal income, as opposed to a means-tested system, is soundly political. People are suspicious of welfare programs that are tied to income, which are divisive and unpopular. Social Security, on the other hand, which offers the same benefits to everyone regardless of need, has become a secure institution.

Barnes hastens to inform his readers that although society has dire wealth-distribution problems, he steers clear of command-and-control re-distribution. “As an entrepreneur,” he writes, “I strongly believe in markets, though markets with more players than today’s. And I believe just as strongly in private property, tempered by a certain amount of community property.” The key to achieving this balance is establishing new pipes (he talks a lot about the societal plumbing through which various streams of income flow) to recycle “nonlabor income” back to the people, to supplement the wages they have lost to globalization and technology and whatnot. Barnes envisions a market system in which “the rich would still get most of their income from property, and the middle class would still get most of its income from work.” But: labor doesn’t provide people with enough income, so we need a new set of pipes that “collect property income from various sources and spit it out to everyone…. The governing principle behind these pipes would be everyone-gets-a-share rather than winner-takes-all.”

That sounds like a really groovy idea! So, what is the “co-owned wealth” from which this recycled rent would flow? I know that Georgists out there have their hands raised, but Barnes offers a much more comprehensive answer than old-timers like us. Co-owned wealth, he says, has several components. First, of course, there are the gifts of nature: “our atmosphere and watersheds, forests and fertile plains, and so on.” Then there is the co-owned wealth we inherit from our societal ancestors: “sciences and technologies, legal and political systems, our financial infrastructure, and much more” (Barnes is big on the so on’s and much more’s). Finally, there is “the wealth of the whole — the value added by the scale and synergies of the economy itself.” These three categories, according to Barnes, comprise the Commons.

Here, again, Georgists are urgently raising their hands to point out that Barnes needn’t be so vague about this; Henry George clearly explains how the rent of land — a market-based figure — precisely quantifies the amount of wealth that belongs to the whole community. George’s explanation of this is persuasive and clear, and much easier to quantify than some unwieldy tallying-up of political systems and financial synergies.
Apparently Barnes has read Henry George (he quotes him, anyway) —
so one wonders why George’s simple method doesn’t commend itself to him. Barnes talks about the gifts of nature, and about ecosystem services, but he doesn’t seem to be much interested in… land. Especially urban land values: he doesn’t mention them at all.

Barnes extols the model of the Alaska Permanent Fund. Governor Jay Hunt believed that the rent of Alaska’s oil and gas resources ought to belong to the people of Alaska in perpetuity, and he worked to enact a system that Alaskans continue to enjoy. In order to provide those annual dividends, however, the A.P.F. has relied on a highly conventional investment strategy. It has sizable holdings in companies such as Wells Fargo, Exxon Mobil, Pfizer, Nestle, Visa, Comcast, Chevron, InBev (see page 20), HSBC, Monsanto and Royal Dutch Shell; it also has a large and growing portfolio of real estate. The Alaska dividend model wouldn’t work if it weren’t able to take advantage of the overall rent-drenched investment climate, the very climate that has so enriched the 1% at the expense of the middle class. Furthermore, housing prices in Alaska are about 50% above the US average — and Alaska did not suffer the precipitous drop in residential real estate value, after 2008, that afflicted the lower 48. It seems very likely that the additional $2-3K in per capita annual income has been capitalized into Alaskan land values.

Presumably, though, Alaska had to utilize the existing financial infrastructure because Barnesian rent plumbing was not yet in place. Barnes identifies four major sources of non-labor income to flow in the new rent pipes: 1) the atmosphere — specifically, some manner of payment for carbon emissions; 2) the financial infrastructure (more on this in a moment); 3) intellectual property protection: Barnes would impose some sort of a fee on “patent- and copyright intensive industries” to compensate the community for its IP-protection services; 4) The electromagnetic spectrum. Curiously, Barnes wouldn’t tax the value of the spectrum itself; instead he would levy a fee on “the value added by the broadcasting and communications industries.”

Number 2 above, the financial infrastructure, is a controversial and interesting subject to many of our readers, who will praise Barnes for including it in his list. In the appendix, Barnes tallies “back-of-the-envelope” figures for the dividend revenue the US might expect from each of these sources. The largest single source he cites is a small fee on financial transactions, which would yield some $352 billion annually. Given some of the cockamamie things we do tax in this country, this might not be such a bad idea (though it does tax noncoercive market transactions just because they’re there).

Barnes would also derive dividend revenue from the “money-creation privilege” of fractional reserve banking. His analysis of this topic is not deep (his notes on it cite Wikipedia). He would tap this source of dividendable funds by confiscating all the new loans made in a given year and giving that money right to the people. The $323 billion he cites as available from this source in the current year is, simply, the full amount that M2 (broad money, including cash, checking and saving accounts, and money market funds) increased during the year! 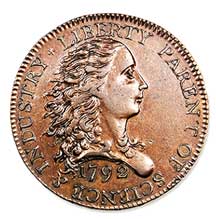 Peter Barnes made his fortune as a cofounder of Working Assets, a pioneering firm in the field of socially responsible investing. His desire to find creative ways to make the “capitalist” system work for everyone is laudable, and certainly seems sincere. However: there are systemic flaws in the economic system than create endemic levels of both inefficiency and injustice. That’s why jobs don’t pay enough. This means that “socially responsible businesses,” such as Working Assets and even, in a sense, the Alaska Permanent Fund, can never grow beyond the relatively small niches in which they work. Peter Barnes wishes to create a “Working Assets” pipeline for the entire economy — but he seems to think that can be done without touching the central, greatest and most universal source of rent: the land itself.

The Citizen’s Dividend is a very attractive policy idea, and someday it may well be a key component of a truly just and prosperous Georgist economy. The ATCOR principle strongly suggests this. That theory holds that all current tax revenues come at the expense of existing rent, and therefore if there is any rent in the current economy, the overall rent fund must be greater than current overall tax revenues. Not only that: one can expect the greater prosperity of a truly Georgist economy to create an even greater rent fund. These tantalizing possibilities, however, tempt some to overanxiousness, touting the citizens’ dividend as the most important aspect of Georgist policy. But the dividend must be reserved for the endgame; we cannot lead with it. Peter Barnes doesn’t get that; he would be happy to have a citizens’ dividend, even if it were funded by a VAT. Students of Henry George realize how daft a policy that would be.

Georgists should not give themselves a pass for folly or closed-mindedness. But we shouldn’t kid ourselves, either: our job is tough, and a flash in the pan can easily cloud one’s vision.