As a Georgist I love to tell people that the game of Monopoly was really invented by a woman who wanted to illustrate Henry George economics and to help end poverty and its suffering. Most people have never heard of George, but everyone has heard of Monopoly. So then we’re at least on the same page, and the conversation can proceed. Consequently, when Mary Pilon’s The Monopolists was published earlier this year, complete with “Henry George” and “Single Tax theory” in the Index, I anticipated that the Georgist cause would get some beneficial publicity. I’ve had to re-think that a bit.

What’s obvious, of course, is that Pilon’s book is about the history of a game and not primarily about economics. And it’s good that Pilon has documented, exhaustively and conclusively, that Monopoly was NOT invented by Charles Darrow during the Great Depression. It turns out that Darrow was taught one of several circulating free versions of the original Landlord’s Game, created by Lizzie Magie, who patented it in 1904. Darrow 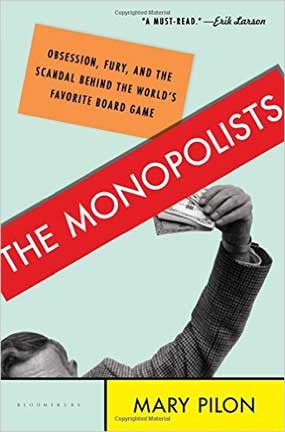 made some changes to the board and rules and sold it to Parker Brothers as his own in 1935. Lizzie Magee’s father was a Single Taxer and journalist who had traveled around Illinois with Abraham Lincoln as he debated Stephen Douglas in 1860. James Magee had shared with his daughter his Single Tax enthusiasm, which later bore fruit in her Landlord’s Game. Pilon tells Magie’s story through the sub-story of Economics Professor Ralph Anspach of San Francisco,  who in 1973 developed a game called Anti-Monopoly to teach his students about various trust-busting laws. Parker Brothers wrote Anspach, demanding that he cease and desist from using a name too similar to theirs. The two parties became embroiled in patent litigation for years, until the Supreme Court ruled in Anspach’s favor in 1982. A settlement from the company enabled him to pay off the three mortgages he had taken out on his house to finance that long struggle.

But Anspach’s story seems to turn out more happily than the book’s treatment of Georgism, with which the Monopoly game is forever linked. Sadly, Pilon seems to give short shrift to George himself, covering his life, writing of Progress and Poverty, mayoral campaign of 1886, and death in only four out of 244 pages. She describes him as a charismatic politician  chronologically and in terms of impact. Further, “charismatic politician” isn’t a purely laudatory term; it could also apply to Adolf Hitler, Huey Long, or Boss Tweed. The same puzzle appears when Pilon writes that Magie “wanted her board game to reflect her progressive political views, which centered on the economic theories (my italics) of Henry George.”

The word “theory” is no problem when referring to something widely agreed upon, like Einstein’s theory of relativity. But when applied to ideas that are controversial or in the minority, it can suggest error; and was often so used by George’s opponents in early Single Tax debates.

Also unfortunate are some of Pilon’s renderings of George’s ideas, such as “His main tenet was that individuals should own 100 percent of what they made or created, but that everything found in nature should belong to everyone.” (pp. 18-19)   Her last clause makes things sound quite chaotic, and is only a very rough approximation of George’s thought, which he conveyed in precise and careful language, correctly anticipating that he would be attacked by vested interests, since he himself was attacking the institution of private property in land (and proposing a remedy). Pilon might have done better to merely select a quote from George’s chapter “The Injustice of Private Property in Land,” such as: “There is in nature no such thing as a fee simple in land.”

Another problem: she writes, “George’s message had resonated deeply with many Americans in the late 1800’s, when poverty and squalor were on full display in the country’s urban centers. Poor immigrants and natives alike were packed tightly together in noxious slums, where they slaved long hours in dirty, dangerous factories, earning little more than a pittance.”  All true, but does Pilon not read the daily newspaper?  She may have missed the story during this past year’s very cold winter in which a woman worked at minimum wage every day starting at 5AM in the packing room of a major retailer which turned on the heat only when its doors opened at 9:00. When she wore a jacket and hat to work, the company sent her home and put a negative note in her employee record. She contacted OSHA, which ordered the company to counsel employees about preventing hypothermia, but did not require any change in its heating policies. Newspapers would be unable to cover the plethora of similar stories; this one made the news only because that particular employee was more pro-active than most.

Also, aren’t cities today still full of “noxious slums,” even if the drug and violence-filled housing projects have TVs and microwaves?  Pilon’s exclusive use of the past tense on this crucial subject could be taken to suggest that George’s calls for economic justice are of historical interest only; and if so, that would be extremely regrettable.

There is also Pilon’s New York Times article of Sunday, February 15, 2015, just as her book was hitting the stores. It seemed a generously long article for the Times, complete with color pictures of Magee’s and Darrow’s game boards, and also George and Magee in black & white. But one of the headings in that article is “Cult Hit to Best-Seller” For me the word “cult” is a clear negative with regard to Georgism. However, it is absolutely her right and everyone’s right to agree or disagree as they see fit.

So let me be honest rather than hyper-critical. I think it is dangerous today to speak loudly or write extensively on anything even close to a critique of private property in land and still be safe in one’s career, employment, etc. Wherever one lives, there is land, and there are landowners benefiting from the present system. These individuals often have extensive influence and power on the local scene, and often nationally through campaign funding, lobbying, etc. Therefore I thank Mary Pilon for saying as much as she did about Georgism and for putting Henry George and his powerful analysis clearly and ironically on the same map with the all-famous, all-American Monopoly game of getting rich through real-estate!  I think we can all have a good laugh, and then rally our forces and continue the work.