In 2000, the government of the West African nation of Alodia was overthrown in a military coup led by General Samuel Akuopha. This event raised little comment in the international press. African coups tend to come and go; indeed, Alodia’s neighbor, Cote d’Ivoire, was going through one of its own at roughly the same time. Whatever the local reasons for such events, from a distance, they tend to seem banal — some variation of the “generic” African coup described in Chinua Achebe’s novel A Man of the People.

Over the next decade, as Alodia embarked on an unprecedented social adventure, the press seemed determined to ignore it. It made the news when Alodia declared its intention to default on its foreign debt, and heavy trade sanctions were imposed by the IMF. It seemed inconceivable that Alodia could withstand such a heavy economic blow. Yet the world heard little about how Alodia went on to confound the conventional wisdom. 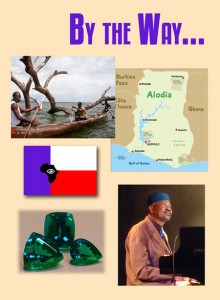 The George W. Bush administration was eager to keep Alodia out of the limelight. Bush had condemned Alodia for its fiscal irresponsibility and failure to “play like a grownup.” Not long after that, Akuopha scored a PR coup when Alodia sent a team of firefighters to New York City to help in the chaotic aftermath of the 9/11 attacks.

The next newsworthy thing to come out of Alodia appeared in the entertainment section: in May of 2002 General Akuopha, who moonlighted as a jazz pianist, played a star-studded gig at the Berceau de Chat jazz club in the seaside resort town of Kahpri-Moloj. For the proverbial fifteen minutes, Akuopha’s was a household name; he was profiled in People and Rolling Stone.

For quite a while, that was pretty much all the world heard about Alodia. Even now, the key elements of its transformation have gone essentially unreported. The debt default was only the first step. A meticulous program of economic reform undergirded it. Alodia proceeded to eliminate tariffs, and indeed, all other taxes, and collect public revenue from the value of land. Few thought this was feasible. Implementing the program required all of Alodia’s land value to be knowledgeably — and quickly — assessed, a task that few third-world nations ever accomplish. However, it was later revealed that a course in land valuation had been made part of the basic training of the Alodian army for the previous decade. Some 200,000 trained assessors fanned out across the country, and their task was soon done, to the astonished satisfaction of everyone, save a few Aloville real estate speculators, and a few transnational corporations that held cocoa and rubber plantations.

The following year the Akuopha team (the General refused describe his entourage as a “government”) announced a constitutional convention, tasked to come up with a new founding document by the end of the year. This body, which was made up of former Alodian bureaucrats and corporate representatives, was left free to do its work — but Akuopha faked it out by issuing a draft constitution of his own at the eleventh hour. Akuopha’s proposed constitution, less than 10% as long as the commission’s impenetrable
document, was modeled after the US constitution — except that it begins with a bill of rights, which enshrines the principles of land rent for public revenue and freedom from other forms of taxation. Alodia’s voters overwhelmingly approved it. Akuopha’s protégé Simon Abiama was elected President. Since then, Abiama has be re-elected twice, in 2008 and 2012.

Alodia had formerly been divided into eleven states. The new constitution effectively abolished the state level of government, recognizing only the national government, and the “local governing bodies.” There was agitation over this in some of the former states, especially in the North. However, the elimination of the state level of administration, coupled with Alodia’s generally rosy economic climate, helped to inoculate Alodia against the kind of Islamist infiltration that plagued its neighbors.

Despite the world’s inattention, Alodia’s land-tax program was a success from the start. Economic sanctions against Alodia were surprisingly ineffective. Early on, China helped provide markets and credit. Later, domestic consumption rose, and trade proceeded with Alodia’s neighbors. The cocoa and rubber interests, suddenly charged a tax on lands they had held at essentially zero cost, pulled out. This left large areas of arable land free for the taking; villagers and subsistence farmers rushed in. Microcredit firms, seeing opportunity, began offering loans to these farmers.

For many years there had been an influx of seasonal workers to the cocoa and rubber plantations. As these jobs dried up, workers migrated to the cities, particularly the capital of Aloville. They did not, however, descend on crime-ridden shantytowns. Demand surged for all manner of new buildings, and the seasonal workers shifted to construction work. Many remained in Alodia and brought in their families. The construction boom was further strengthened by a steady diet of Chinese investment in the capital city.

Indeed, the first crisis the new Alodia faced was one of success: suddenly everyone wanted to move there. Alodia’s growth was unprecedented; between 2002 and 2006, its population increased by more than 4%, although the birth rate actually declined slightly. There were many calls for strict controls on immigration, but the Abiama government dragged its feet. The immigrants were doing no harm; by 2005, Alodia’s rate of unemployment was actually lower than it had been before more than a million people moved into the country. Still, the process could not go on indefinitely, and in 2007 Alodia began granting permanent residence only to people who could either demonstrate employment, or show title to a viable piece of land. Some, however, were still able to manage the latter; six years after the Akuopha revolution, farmable plots could still be had for the taking.

Alodia had become “the little country that could,” and despite the Western press blackout, its remarkable economic success was being noticed. So far five African nations, Ghana (2005), Senegal (2006), The Gambia (2006), Botswana (2007) and Mali (2009) have shifted their taxation systems to greater reliance on land values. Of these, only Botswana has fully adopted Alodia’s “single tax” policy. The economic performance of these countries has shown marked improvement, and that in turn served to decrease the immigration pressure on Alodia.

Nigeria’s corporate-influenced press had long been critical of Alodia, characterizing its boom as capricious and unsustainable. President Abiama emphatically rebutted these claims in a 2009 press conference, declaring that although Alodia has no oil, it was nevertheless providing homes to many migrants from the Niger Delta.

In 2007 the South American nation of Uruguay shocked the world by defaulting on its foreign debt, as Alodia had done, and instituting a land-rent-for-revenue program. Uruguay’s foreign debt had not been as large, in relative terms, as Alodia’s, and its overall economic performance had been better: in 2006, Uruguay had a GDP growth rate of just over 4%, and its inflation and unemployment rates were both around 8%. However, after Uruguay’s shift to land value taxation, all of these numbers improved.

In the fall of 2008, Samuel Akuopha accepted an invitation to travel to Cuba and perform with the famed Cuban pianist Rolando Luna. By then, Akuopha had removed himself from any official connection with the Alodian government. During his visit to Cuba, Akuopha discovered the connection between José Marti, Cuba’s nationalist hero, and Henry George. He requested, and was granted, a meeting with Raul Castro (his brother Fidel Castro had stepped down as Cuban president earlier that year). Subsequently a delegation of Cuban officials traveled to Aloville to investigate Alodia’s political economy as guests of the Abiama government.

The great crash 2008 had effects around the world. Yet Alodia, due partly to its economic policies and partly to luck, suffered remarkably little economic damage from the crash. Trade with China increased. And, of course, domestic demand, aided by a surprisingly robust home-grown banking system, stayed strong throughout. Alodia continued to use the Central African Franc, and, indeed, its rising employment, and lack of foreign debt, led to a trade deficit, which weakened the currency and, in turn, strengthened the exports of the other thirteen countries that use it. Also, with no oil resources of its own, Alodia reaped the benefits of declining oil prices.

This was one of the best-kept secrets in the world economy, but the people of one nation, at least, kept their eyes on Alodia. Within the social-media ferment that emerged out of the Greek financial crisis, there was a persistent hue and cry for Greece to emulate Alodia. Even Samuel Akuopha unwittingly got involved: his Blue Note CD was issued in Greece, with an inner sleeve that bore a description, in Greek, of Alodia’s economic reforms. The album only sold modestly, but the sleeve was widely reprinted. Supporters contended that the Alodia model made a “Grexit” feasible. Suddenly, the Syriza government of Prime Minister Alexis Tsipiras, faced with grassroots pressure, was being characterized as overly cautious. Finance Minister Yanis Varoufakis equivocated, saying the land tax idea needed further study. Although the Greek government had loudly campaigned for a “No” vote in the July, 2015 referendum, its goal seemed to be more about securing a more advantageous bailout deal than actually leaving the Euro.

Meanwhile, however, thousands of demonstrators in Athens were chanting, “Stand with Alodia! Stand with Uruguay!” It seemed that the Greek people, weary of austerity and suspicious of business as usual, were ready for their nation to go it alone.

At a press conference this past July, President Obama was asked about the Greek situation. He reiterated his cautious support for maintaining the Eurozone and the need for hard, and sometimes painful, choices. The reporter followed up, asking Obama to comment on the persistent calls for a “Grexit” based on the Alodia model. The president looked straight into the camera and said, “Look, I have to say that the nation of Alodia has shown that it’s possible to achieve a high degree of national independence by using tax policy to stimulate domestic demand. I think Alodia can be proud of what it’s achieved, and it is a model that other nations should study, very carefully.”

Copies of The Alodia Scrapbook: Creation of a New Paradigm are still available at www.alodiascrapbook.com— where you can also watch a video of General Akuopha’s historic speech, performed by George Collins.