Twenty years ago I made a decision that has been nearly all-absorbing of my time and energy. I started to compile the documented history of the people who came to embrace the principles embraced by Henry George. Today, despite a considerable number of books and published academic papers on the history of the movement established by Henry George and his generation of stalwart supporters, few people in any country one might name know the movement lives on. The combined efforts of every person who cares about the future of civilization and the planet are necessary to bring our perspectives into the mainstream.

Over the last one hundred and eighteen years (since the death of Henry George in 1897), a long list of thoughtful, talented writers have offered their own reinterpretation of Henry George’s insights, each effort made to reach an audience that George failed to reach. Others dismissed Henry George’s insights because they believed the societal problems he identified had been solved under liberalism, social democracy or democratic socialism. 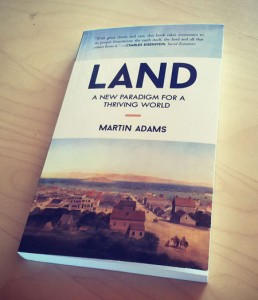 Yet another analysis has been is added to the public dialogue, a book by Martin Adams, a self-described “social innovator, systems thinker and community organizer.” This book, Land: A New Paradigm for a Thriving World, offers to readers the truths he has come to by years of study and his search for, as he states, “the hidden causes of our economic and ecological problems.”

Martin Adams has accomplished something considerable. He has covered the territory succinctly and in a quite readable style. In the introduction he calls for the kind of moral response to societal problems that goes far beyond any reform of our economic system:

My greatest hope is that one day each human being — every one of us — will be able to participate in a society that’s inherently just and that also considers the well-being of future generations. To achieve this, we have to work together in appreciation of our differences and on behalf of our common humanity.

At a time when one finds many reasons to be pessimistic about the future, Martin Adams offers a hopeful analysis, if we act before it is too late.

A departure of sorts from the language of reform relied upon by many proponents of Henry George’s teachings over the last century is his call for those who own or control land to make “community land contributions” rather than “land value taxes.” Others in the Georgist community (myself included) have adopted similar changes in how we explain to others how the treatment of nature as private property conflicts with the most fundamental of our rights, the equal birthright we have to the earth and its natural resources.

Martin Adams addresses one of the very real practical concerns that will occur when communities approach collection of the full potential annual rental value of locations: the selling price of land parcels will fall, theoretically to zero. At some point, governments must make the switch to rental values as the tax base. As important, Martin believes, is that the public acceptance of community land contributions overcomes the existing psychological bias that has fostered “private land ownership as opposed to community land stewardship.” His message is the right one when addressing almost everyone. The exception, unfortunately, is the elected official facing the immediate concern of deciding on how much revenue is needed to balance the budget for the next year, and from which sources this revenue can most expeditiously come.

With his book written and published, what must follow if the vision Martin Adams has offered can be advanced and eventually realized? The obvious answer is to generate public awareness and understanding. I hope his book will find readers who will recognize the rightness of the cause he embraces and adopt the cause as their own. This is the reason we all do what we do, whether we write articles and books, write letters to the editor, post to blogs, teach courses, belong to political and citizen organizations, produce films and videos, create websites, or simply engage strangers in conversation when the opportunity arises. One measure of our challenge is the fact that so few of our parents, siblings, spouses, partners, children or grandchildren find common cause with us.

We do not know when our efforts will achieve the critical mass required for real change to occur. Martin Adams with this book has confirmed his commitment to the cause. I hope this brief review will serve to increase his readership.