The joint conference of the Council of Georgist Organizations (CGO) and the International Union for Land Value Taxation (IU) held in August in Southfield, Michigan has come and gone.

Was the conference successful? I can only speak from the point of view of a first timer to an international Georgist event. If I can detach myself psychologically from the excitement that came with my visiting America for the first time, I can confidently say that the conference was limitedly successful but profoundly instructive at the same time. 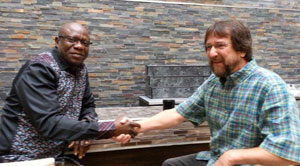 Gordon and Lindy finally meet in person, after decades of correspondence

It was quite exciting for me not because I was privileged to present a paper on Capturing Resource Rents but had the honour of meeting most of the great minds behind the Georgist movement. Most of these I have read so much about via emails, in articles and books or had communication exchanges.

I found Georgists to be among the nicest people I have ever had the privilege of interacting with, people who are very good natured. I think this stems from the passion they feel about the immensely difficult job of creating a world socio-economic system that entrenches justice and equity.

In this respect, I wish to mention a few names like Heather Remoff, Lindy Davies, Scott Walton, Ed Dodson, Ted Gwartney, Mark Sullivan, Allen Smith, Paul Martin, Paul Justus, Karl Fitzerald, Bill Batt, Dan Sullivan, Teckla C. Negga Mechior and Quisia Gonzalez among a host of others. I however very much missed the company of renowned economist whom I like to tag the gem of the Georgist movement, Jeff Smith — along with a few others I had hoped to meet in person. 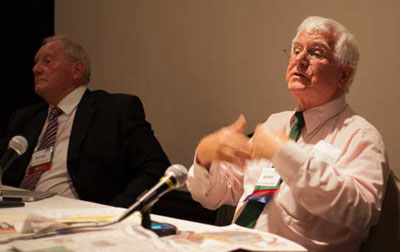 Davids Triggs and Wetzel made subtle, informative presentations on the political economy of transportation and water.

Alanna Hartzok, IU Secretary and her family played such wonderful hosts to me in their home in Chambersburg, PA. She got me interviewed by the editor of local newspaper The Public Opinion which even had my photo splashed on its front page.

The theme of the CGO/IU Conference was “Reclaiming Our Land and Water: Michigan and the World.” This got me wondering what was so special about Michigan to warrant a conference focus.

I however recalled memories of stories I have read about Detroit being a show-business capital during the heyday of Tamla Motown Record company with such popular musical groups as the Jackson Five, Aretha Franklin, Diana Ross, the Temptations and others who ruled the airwaves of America, Europe and Africa.

I equally remembered reading social reviews and economic reports of Detroit’s booming automobile industry characterized by flashy Chevies and big Cadillacs. Today, Detroit has become a shadow of itself, a city haunted by an illustrious past and a very challenging present.

During our first visit to the Detroit Beer Company and later during the bus tour by Scott Walton, I could but notice how deserted the city looked. It seemed to me like a great number of its residents had travelled out or relocated to other places as the traffic was scanty and most of the restaurants were almost empty at lunch time. It lacked vibrancy, unlike what I experienced in New York City. 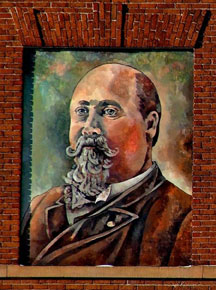 Then came Detroit’s day at the CGO/IU conference. Local social activist Maureen Taylor shocked participants when she revealed that about 50,000 families in Detroit have been shut off from water supply because they could not afford to pay the water rate. This to me was most heart rending. Who then should pay for water and transit, in the present challenge confronting Detroit, was the question that formed the main thrust of David Triggs’s presentation.

The conference was unable to get Detroiters interested in attending, despite the fact that the event made one of their challenges a central focus. Or perhaps there was not enough media publicity about the conference. Those that were formally invited did not show up, except for Maureen Taylor and politician Samantha Harkins. Taylor, in her characteristic manner, refused to consider the brilliant solution proffered by Triggs in his presentation. She described such and other contributions as mere good ideas, which they were tired of. Her tone and body language to me sounded like Biblical saying that ‘John the Baptist, the Kingdom of God suffereth violence and the violent take it by force’ So water must be taken by force.

Other speakers at the conference I must say also made very brilliant presentations. I however wish to admit that I got lost when Bill Batt made his scholarly presentation of ‘Deadweight Losses: The Productivity We Never See’ I later found out that there were quite a few others in the conference in the same shoes as I.

The conference showed a spark of hope for a bright future for the Georgist movement when four members of the younger generation, Lawrence Bosek, Alodia Arnold, Edward Miller and Nate Blair expressed their faith and passion for a new world of justice and equity, and their readiness to take the baton from the older Georgist folks. 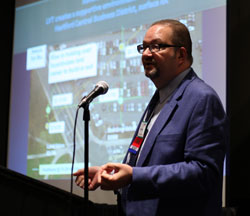 The older folks were therefore admonished not only to mentor the younger ones but also further encourage them by funding Georgist projects and programmes around the world. It was in this vein that Paul Martin from Nicaragua bluntly decried the lack of funding in the Georgist movement for forward-looking efforts such as his own.

As part of efforts to create a coordinated Georgist advocacy strategy internationally, Karl Fitzerald of Australia suggested the establishment of some sort of information pool from which Georgists can freely draw.

Lawrance Bosek came up with the brilliant idea to take advantage of social media with a Henry George Google Doodle tribute, an educational graphic about Henry George to be displayed on the Google home page to attract millions of people worldwide.

Finally, all arrangements were efficient, with so much comfort and food to eat (thanks to Sue Walton) as well as so much food for thought. Now, how do we effectively go forth to tackle the world with our message of hope?