Henry George’s life and work have interested a small number of academic historians in each generation since George died in 1897. The latest of these, Professor Edward O’Donnell, succeeds in bringing to life the temper of the times during which Henry George rose from obscurity to become a champion of what he embraced as the true principles of republican democracy.

Professor O’Donnell describes how Henry George’s character was forged in his struggles to overcome hardships as a young man attempting to provide for his wife and children. The more George observed and learned, the deeper became his commitment to systemic change. He embraced the challenge as a spiritual calling, one he could not set aside regardless of the consequences to him personally. 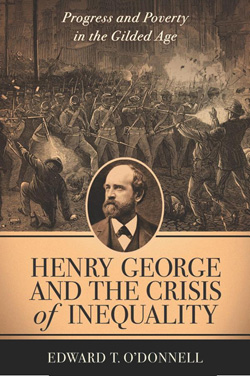 Readers familiar with the details of Henry George’s life will find few revelations in this work, but they will find insight into the reasons the movement began by Henry George faltered after a seemingly remarkable entry into the political arena. George neither pursued nor desired a political career. Yet, once committed, he gave his full energies to deliver his hopeful message to a constituency desperate for a political champion.

Over the decades, a number of prominent members of the Georgist community have debated whether Henry George’s entry into politics enhanced or diminished serious consideration for his program of systemic change. In the realm of ideas, only in recent decades has Henry George begun to be re-evaluated as a political economist and moral philosopher, independent of the details of his activism.

Overall, I found little to criticize in Professor O’Donnell’s treatment of Henry George’s economic ideas — with one significant exception. Early in the book he writes: “[G]eorge invoked the labor theory of value, arguing that all wealth is produced by toil.” [p.27] What Henry George invoked, actually, was a labor and capital goods basis for private property. Value is something quite distinct, subjective and dependent upon demand. The history of invention is filled with the creations of labor that failed to find acceptance in the market. The origin of this misinterpretation of his principles is found in the 1886 election campaign and the writing of the United Labor Party platform, as indicated by Professor O’Donnell: “Asserting the labor theory of value, the plank ended by decrying the system in which ‘the wealth producer [becomes] the industrial slave of those who grow rich by his toil.” [p.207]

Although over 68,000 New Yorkers cast their votes for Henry George to become the city’s next mayor, George quickly came to understand that this support came from workers who did not embrace his principles or his program as the solution to their struggles against what they saw as an oppressive capitalist class. They did not comprehend the deeper threat of landed privilege. Nor, apparently, did many in the crowd listen closely when in his acceptance speech George attempted to raise the stakes:

Why should there be such abject poverty in this city? There is one great fact that stares in the face anyone who chooses to look at it. That fact is that the vast majority of men and women and children in New York have no legal right to live here at all. Most of us – ninety-nine per cent, at least – must pay the other one per cent by the week or month or quarter for the privilege of staying here and working like slaves. (Quoted in: Louis F. Post and Fred C. Leubuscher, Henry George’s 1886 Campaign, Henry George School of Social Science, 1961, pp. 25-26.)

Beginning with the eighth chapter, “Your Party Will Go Into Pieces,” Professor O’Donnell provides the details and analysis that makes this book a must read for today’s Georgists. Socialists and trades unionist leaders had united, temporarily, behind the candidacy of Henry George because he brought to the campaign qualities no other potential candidate at the time possessed.

If politics was to be required as the path to systemic change, then Henry George would need to recruit others who fully understood and agreed with his principles of political economy. And, so, George and his associates determined that the first step was to purge the United Labor Party of socialists. “In short order,” writes Professor O’Donnell, “the body approved a party platform that included an explicit refutation of socialism.” [p.261]

In one important respect, Henry George and his supporters anticipated the mood of a people still committed to the rule of law and to working within the existing socio-political arrangements and institutions. Change would come only when the overwhelming majority of people were convinced that changes were needed. This would take time. Remarkably, each new generation of Americans lived through cycles of boom and bust without losing faith that the future would always be better. Professor O’Donnell provides some explanation for this but does not take into account the fact that although the frontier was closed, much of the North American continent remained to be settled and its resources developed. Americans prided themselves on their work ethic, and the political structure eventually responded to reduce the power of trusts and monopolies. The Progressive era re-opened windows of opportunity that were in danger of being nailed shut.

As a result, the struggle for systemic change was moderated. Progressivism evolved into Liberalism. As Professor O’Donnell explains: “No matter how radical the rhetoric and action, working-class activism in the United States largely took place within the traditional political sphere and focused on the struggle to define republican ideals such as liberty, equality, citizenship, and justice.”[p.271]

One essential component of the commitment to the nation’s founding principles (i.e., to “republican ideals”) was the establishment of publicly-funded and publicly-administered schools. Here was the institution where children (including the children of immigrants) were inculcated with traditional American values. As O’Donnell notes: “Progressivism in the United States was a far cry from European socialism, but it also was a far cry form laissez-fairism and social Darwinism.”[274]

Was Henry George’s analysis simply too far ahead of his time to find sufficient support as the basis for a political agenda? Professor O’Donnell provides a list of the many prominent “reformers, intellectuals, and writers” who acknowledged their debt to Henry George for changing the way they thought about the human condition. Yet, even within the organizations built to promote the Single Tax, Henry George’s influence over objectives and strategy declined.

This fact makes it hard to understand why Henry George in 1897 agreed again to campaign for public office. He surely knew that if he was elected he was in no condition to serve. The Science of Political Economy still needed to be put into final form, and this book could have been his most important contribution to the literature, securing his place among history’s great moral philosophers. Professor O’Donnell ends the book with a fitting quote from Henry George that appears on his tombstone: